Missing offense: Trojan offense silenced by No. 13 Auburn in 5-0 loss 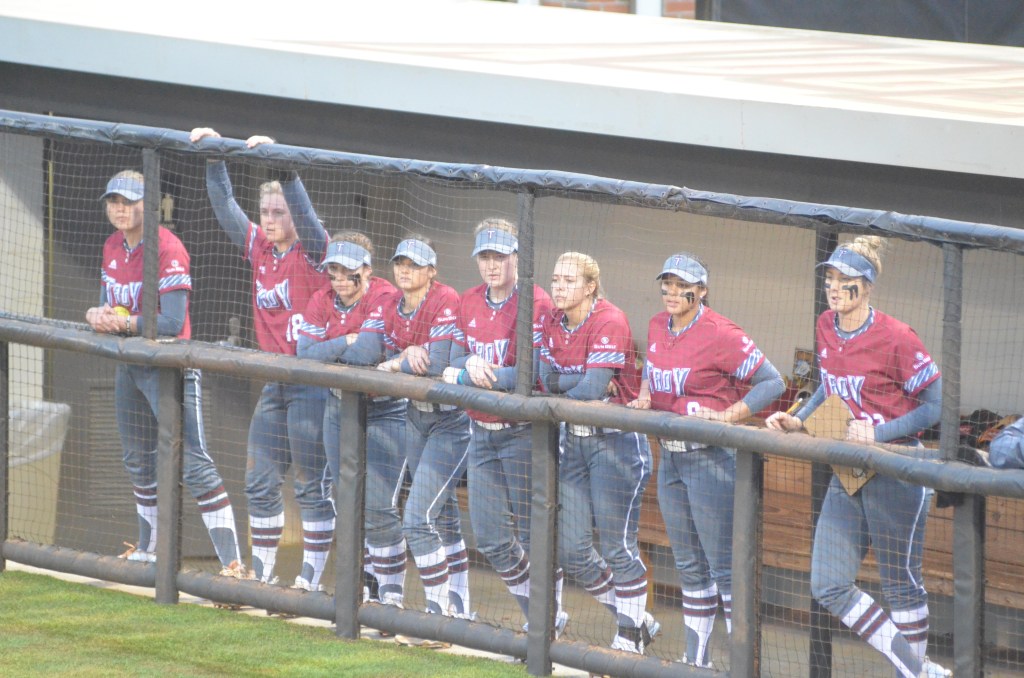 Messenger Photo/Mike Hensley The Troy Trojans cheer on their teammates during their game against Auburn on Wednesday night in Troy. The Trojans lost 5-0.

The Troy Trojans’ offense struggled to put anything together in a 5-0 loss to the No. 13 Auburn tigers on Wednesday night at the Troy Softball Complex.

The loss for the Trojans was their first on the year. Their record now sits at 3-1. With the win, Auburn improves to 7-0.

Walks and an early Trojan error led to the game’s first runs. Auburn had the first two batters reach on a walk and an error. Justus Perry knocked in Victoria Draper with a sacrifice fly to right field for the games first run and Alyssa Rivera knocked in two more with a single to make it 3-0.

The Trojans had their first scoring chance in the bottom of the half. Two straight batters reached with an out in the inning. Auburn’s pitcher wriggled out of the jam with back-to-back strikeouts to preserve the 3-0 lead.

The Trojans once again lacked the big hit when needed. Logan Calhoun reached second base on a two-base error on a slap bunt attempt. She was stranded their after Katie Webb grounded out.

Graves held the Tigers scoreless over the next two innings. In the fourth the Tigers got to her with two outs in the inning when Morgan Podany hit a shot to Graves, who couldn’t coral it allowing Rivera to score from second to bring the score to 4-0.

The Tigers got another run in the fifth when Perry drove in KK Crocker to chase Glover out of the game. The Trojans were able to get out of the inning thanks to a nifty double play started by third baseman Madeline Porter.

Despite not allowing a hit over the first four innings, Auburn elected to change pitchers in the fifth. Troy was able to get their first hit of the game by Kyndal Riddick later that inning.

The Trojans put two runners on base in the seventh but couldn’t scratch across a run.

Graves lasted 4.1 innings and allowed five runs, two of which were earned on seven hits and four walks. Peyton Glover pitched the remaining 2.2 innings without allowing a run.

“I give her (Graves) credit,” Mullins said. “We kind of played on our heels in the first inning. We didn’t throw as many strikes as you would like in the first inning and kind of gave up that big inning. Give her credit she didn’t’ give up and in the remainder of the game I thought she pitched well. Peyton Glover did a great job coming in.”

The Trojans finished the game with four hits by four different batters. Calhoun, Stephanie Snyder, Porter and Riddick all had a hit.

“I want to win,” Mullins said. “I am never happy with a loss, but there are some things we can build on and some positives and negatives that we can get better at.”

The Trojans will be in action on Friday when they take on Montana in the Hillenbrand Invitational.