Trojans sweep Greenville for a pair of area titles 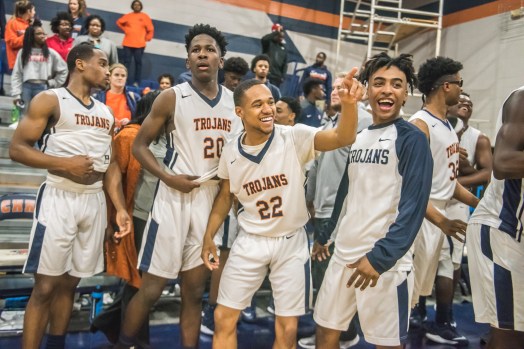 Photos/Charles Henderson players celebrate on the bench on Thursday night. 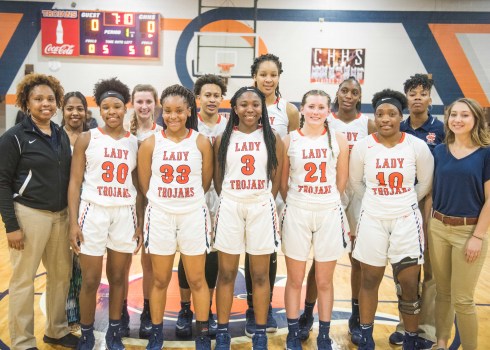 Both the Charles Henderson girls and boys basketball teams took home Area 4 championships on Thursday evening when both teams knocked off Greenville.

The Lady Trojans began the evening with a comfortable 60-45 win over the Lady Tigers. The varsity boys followed suit and took out the Tigers 57-45 despite trailing for the majority of the first three quarters and by as many as 10 points.

The Lady Trojans led by as many as 23 in the game before they emptied the bench to allow many of their reserves to get playing time. The area title was yet another goal accomplished for head coach Dyneshia Jones and the Trojans.

“We are excited,” Jones said. “Like I said, it’s one step at a time. I am excited about this accomplishment.

Niaira Jones led the Trojans in scoring with 19 points after she tallied 10 in the opening half. Maori Davenport added 16 points and Tatyana Siler finished with 10.

The Trojan boys led briefly 2-0 on Thursday night and didn’t see the lead again until the 5:00 mark of the fourth quarter. In the final quarter, the Trojans outscored the Tigers 21-6.

“We played a sloppy first half, but towards the end we started playing the kind of basketball that we are capable of,” said head coach Shelby Tuck. “We have been off for five or six days, so I think we were a little rusty getting started. I thank God for the win and I am excited for the guys.”

The largest deficit of the night for the Trojans was 10 when it was 14-4 midway through the opening quarter. From that point on, the Trojans outscored the Tigers 53-31.

“We had a lot of energy,” Tuck said. “They (Greenville) got all the 50-50 balls in the first half. We started getting those. Keith Wheeler is a sophomore that played his butt off. He was the one that sparked the motivation.”

Jalen Tuck led the way with 17 points while Kelshun Campbell finished with 15.

By virtue of the wins, both teams will host the sub-regionals beginning with the Lady Trojans on Monday night against an Wilcox Central.

“We are looking forward to Monday,” Jones said. “We have to prepare for that game. The further we go, the better the teams are. We have to make sure we have our heads straight.

The boys will also be able to host the sub-regionals beginning on Tuesday against a team still to be determined.

“It is very exciting and I am overjoyed” Tuck said. “I am so thankful and grateful for these guys.”