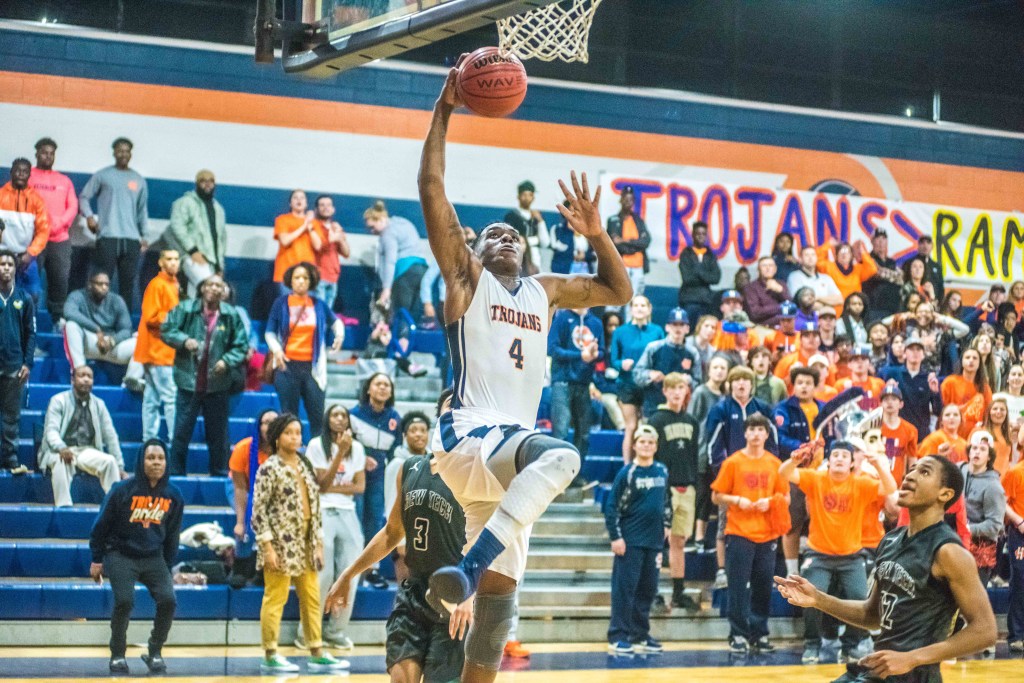 Kelshun Campbell goes up for a dunk in a game against Brew Tech this season.

The Trojans will take on the winner of tonight’s game between Brew Tech and Greenville.

“We are really excited,” said head coach Shelby Tuck. “The guys have been working really hard during practice. We want to keep doing what we have been doing all year and hope for the same results.”

Tuck has recently said that he hasn’t seen this level of excitement for Charles Henderson basketball since his playing days with the Trojans.

“Our fans and the community have been supportive all year,” Tuck said. “It’s been a plus for us and it has helped up build momentum. It’s a big factor in the game. It motivates the kids and they get out there and play extremely hard.”

The Trojans closed out the regular season by knocking off Carroll, Abbeville, Brew Tech and Greenville and, according to Tuck, it’s because they never stop playing.

“They keep grinding and they don’t give up,” Tuck said. “I think early in the season they would get down by 10 … they wouldn’t give up but they weren’t confident. Now that they have climbed out of that hole several times, it has made the games easier. They believe in themselves and each other right now. That has been a big factor.”

The Trojans spent much of the early part of the season playing man-to-man defense and struggled to keep up. The Trojans have bought into the system though lately and their play on the defensive side of the ball has improved.

“Guys were missing assignments and not being committed to what we were doing,” Tuck said. “We have been able to practice that a lot. They committed to what is going on. It’s showing for them. Defensively, we have improved tremendously from the beginning of the season until now. Everybody is doing their job.”

Kelshun Campbell and Jalen Tuck have been a force offensively for the Trojans all season long for the Trojans. Campbell has led the Trojans in the paint, while Tuck has been a steady presence behind the arc. One player that has quietly made a loud impact has been Cobi Jones.

“He is one of the better defenders in the state,” Coach Tuck said. “He is awesome on the defensive end. He gives 100 percent effort. He runs the point for us and he is solid. We feed off his defensive energy. The whole team gets excited and they feed off his energy.”

Another player that could play a big role in the upcoming tournament is DQ Toney.

“DQ is just one of those freak athletes,” Tuck said. “The kid plays all three sports. I have seen him do some things in practice that amaze me. If he gets to the basket and he uses his athleticism, then we are going to be successful.”

The Trojans have seen both Brew Tech and Greenville twice this season and they know what to expect with both of them.

“They are very athletic,” Tuck said. “I can’t pick one or the other, we just have to be ready to play the game that we worked on all year. We have to play our game.”

An area championship would mean a lot to the team, the school and the community, Tuck said.

Tip between Charles Henderson and either Brew Tech and Greenville will be at 7 p.m.