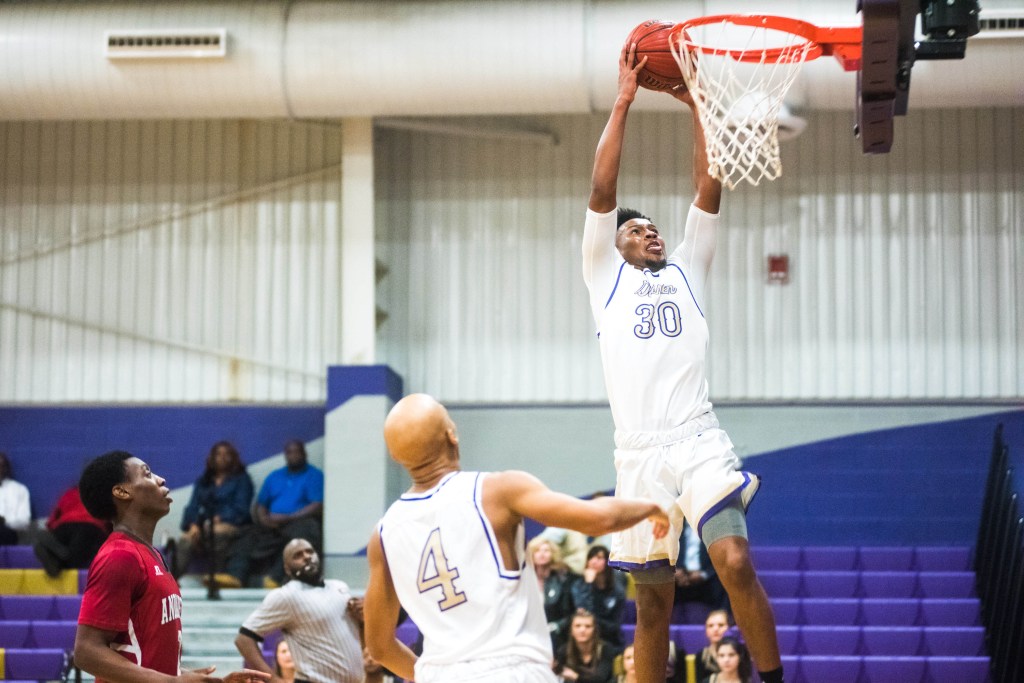 Messenger Photo/Jonah Enfinger Iyan Hinkle goes up for a dunk during a game earlier this season.

It’s time for the area tournament and the Goshen Eagles hope to make some noise when they travel to Calhoun to take on Central Hayneville on Wednesday.

“We have been fortunate to have a few days off,” said head coach Ethan Carroll. “We have been practicing really hard trying to get our legs under us and at the same time focusing on our next opponent.”

It’s been a whirlwind of a season for Carroll and the Eagles. They started weeks after most teams due to the success of the football program, which means they didn’t have long to get their feet wet before area play started on January 4.  Now just a month later, they are playing for their playoff lives.

“The last few games we played not as well as we should be, but we improved in stride when it comes to shooting the basketball,” Carroll said. “If we will continue to do that, and that starts in practice, we feel like we are in pretty good shape. We came a long way in the last two weeks.”

The Eagles head into the area tournament after knocking off the same Central Hayneville team they will see in the tournament. The Eagles also beat Highland Home in the season finale.

Senior Michael Hollis heads into the tournament as the leading scorer for the Eagles in the last two games with 36 points.

“Mike is the type of kid that can go as far as he wants to go,” Carroll said. “We put a lot of trust in Mike. We also expect a lot out of him. He is a senior who has been doing it a long time.”

The Eagles have gotten production from Hollis along with Zach Alford all season long. One dark horse could come in the form of RaQuan Martin who finished off the season with 16 points in the win against Highland Home.

“He is a sophomore and he is one of our guards,” Carroll said. “He has always been able to shoot the ball. This was his first year in varsity and we kind of threw him into the fire early. We feel like he has been through his growing pains and he is at that point where we don’t expect him to play like a rookie. He is a seasoned kid now. We are expecting good things from him on both ends of the floor.”

The Eagles and Central Hayneville will tip off at 5:30 on Wednesday.