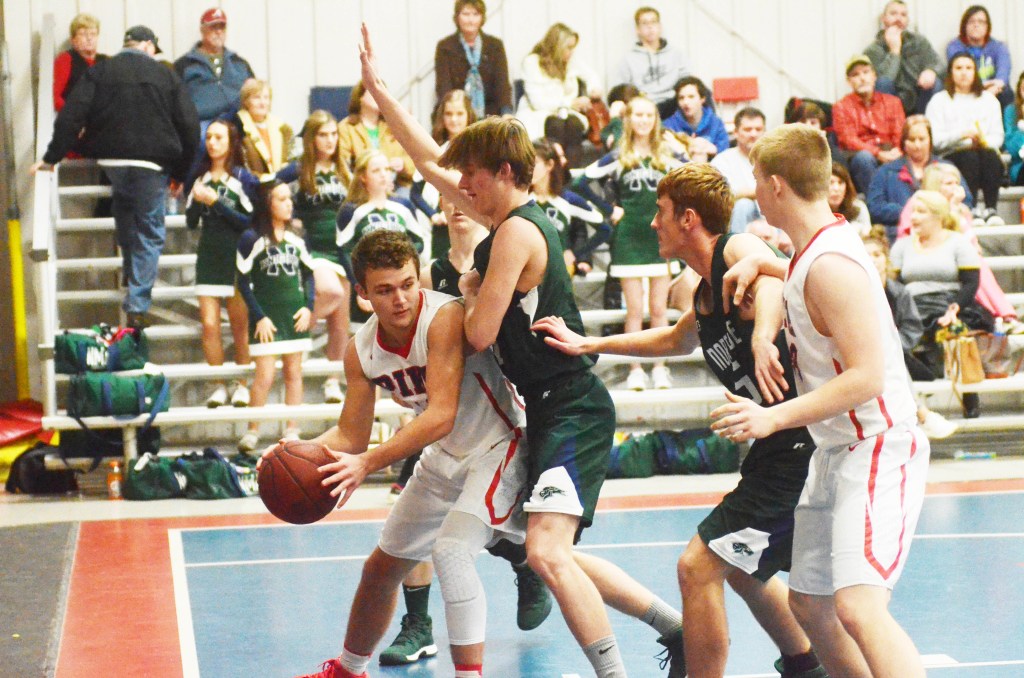 Photo/Mike Hensley Jade Sikes looks for an open teammate in a game earlier this season.

The 2017-2018 basketball season has come to an end for the Pike Liberal Arts Patriots. Now it’s time for a new season as the start of the region tournament gets underway at Fort Dale Academy this afternoon.

The Patriot boys concluded the regular season on Tuesday with a 45-42 win over area foe Lakeside. Head coach Allen Ponder and the Patriots feel they are heading to Greenville with momentum.

“We are coming off a win last night (Tuesday) and we feel like we have a lot of momentum moving forward,” Ponder said. “We feel like we are playing at probably the highest level we have played at this year. Obviously our kids are very excited to get into regional tournament and see what happens.”

Playing the best heading into tournament play is what any coach should strive for. With the win, the Patriots feel like they are there.

“It’s very important,” Ponder said. “When you go into these game and you feel like you’re playing your best ball, that gives not only your coaching staff confidence, but your kids confidence – feeling like everything is clicking at the right time. Going into this region tournament being able to feel like that is a very good thing for us, not only as a coach, but for our kids.”

Defense has been a point of emphasis for Ponder all year. After a slow start to the season defensively, Ponder believes it is now an area of strength.

“I am a firm believer that defense leads to offense,” Ponder said. “I think it all starts on the defensive end of the floor. Our kids are working extremely hard on defense and they are playing well on defense. When you are able to get stops and eliminate second chance points, that leads to good things on the offensive end. As the year has gone on, we have gotten much better on the defensive side of the court.”

Ponder believes good defense is important when playing on the road in the tournament.

Fort Dale will be the opening round matchup for the Patriots. The Eagles and Patriots are rivals, so there should be no shortage of energy.

“We should have no problem in that area,” Ponder said. “No matter what, when you get into tournament time and you’re pretty much playing for your life, I think you come out with a lot of excitement. Our kids have had a lot of excitement since the Christmas break.”

A win in round one will clinch a spot in the state tournament, but one loss will bring the Patriots’ season to a close.

“We have to win one game to move on,” Ponder said. “If we win one game than the rest of the tournament is for seeding. We are pretty much in a one-game season right now.”

The Patriots and Eagles will begin their tournament this evening at 7.

The Patriots finished the regular season with one win. With the tournament set to get underway, head coach Chris Garner wants to see a team effort.

Like on the boy’s side, one win would guarantee the Lady Patriots a trip to the state playoffs. If they win round one, they will await the winner of Northside and Hooper on Friday.