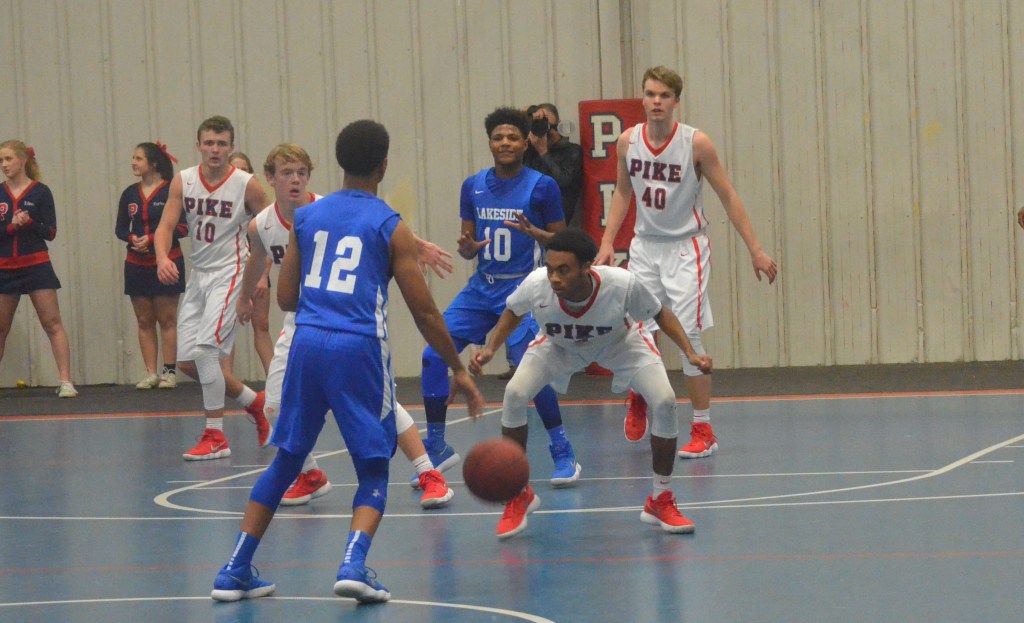 Cody Hollis (left) and Javon Christian (right) attempt to defend a Lakeside player during their game on Friday night in Troy.

Late turnovers and offensive rebounds were the difference in the Pike Patriots’ 36-32 loss Friday night on senior night.

The loss drops the Patriots to 1-2 in area.

Friday night’s game featured defense, energy and long-range shooting for both the Chiefs and the Patriots.

“I am very proud of my guys,” said head coach Allen Ponder. “We wanted to come in here and compete. Last time we played these guys I didn’t think we competed. Today I feel like we had a good game plan for this basketball game. Our guys bought into it and I feel like we played very good tonight. We had a couple break downs on defense to give them some second chance points and they knocked down some big shots. We had the shots we wanted. We just didn’t make the big shot.”

“We preach swarming the basketball and play with great intensity,” Allen said. “In the past we we haven’t done a great job at being in the right spots. Tonight we did a much better job at that and I hope the guys saw it can disrupt some things when you are in the right spot.”

The Patriots came out in the second half and went on a 6-0 run to take a one-point lead at 17-15. By quarter’s end the Chiefs had battled their way back into the lead at 25-23.

The teams traded baskets to begin the final quarter. The Patriots were able to keep their deficit to one point, but couldn’t get over the hump and regain the lead.

With under two minutes remaining and Pike down by just three, the Patriots had their opportunities to climb back in the game. The Patriots committed two turnovers and allowed an offensive rebound that clanked off Jade Sikes hands after a key missed free throw.

“We just have to secure the basketball when we get the rebound,” Ponder said. “Jade Sikes did a tremendous job for us all night long. I can’t say enough about the effort he gave.”

Sikes nailed a 3-pointer in the game’s final seconds but it was 4 points shy of what they needed.

The Lady Patriots began the evening with a 36-17 loss to the Chiefs.

The Lady Patriots trailed 16-7 heading into halftime and never could recover.

The Patriots will be back in action on Monday when they travel to take on Northside before closing out the year against Lakeside on January 23.