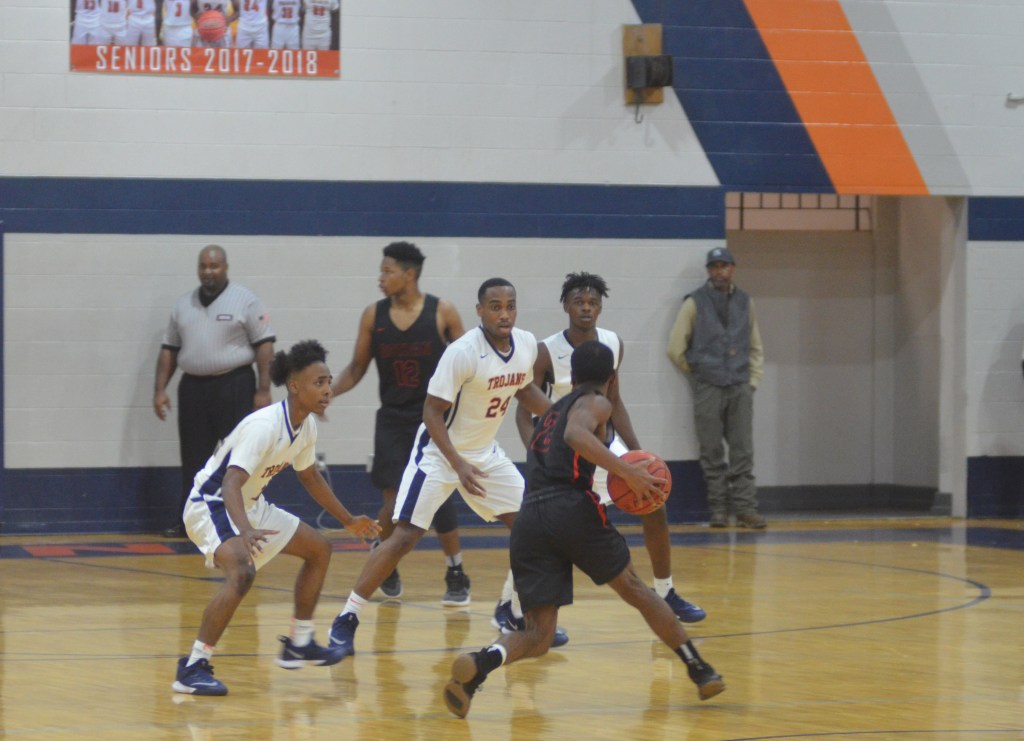 The Charles Henderson Trojans held on to defeat Dothan 59-53 on Monday evening in Troy. Above: Jalen Tuck (24) guards a Dothan player.

The Charles Henderson Trojans overcame an early deficit and held on to defeat Dothan 59-53 on Monday night in Troy.

The Trojans got off to a rocky start in what coach Shelby Tuck called ‘an ugly game’ against the Class 6A Tigers.

“Ugly, ugly, ugly,” Tuck said. “It seems like every time we come off a big win we battle and try to come back and play the next game. We grinded and got the win.”

“We knew they were going to be shooting a lot of threes,” Tuck said. “Normally they try to drive it to the basket, but I think they were missing a couple guys tonight, so we just kept grinding and playing defense.”

“It seems like it’s someone different that steps up every time,” Tuck said. “He is a stretch four. He can go out and play on the perimeter and he can obviously play inside and drive. He has a little bit of everything.”

The Trojans went into the break trailing 28-25. It didn’t take long for the Trojans to come back in the second half. Jalen Tuck’s two-point shot gave the Trojans their first lead of the game in the opening minute of the quarter.

Tuck went on to score six points in the quarter. In all, the Trojans outscored the Tigers 18-11 in the quarter and went into the fourth holding a 43-39 lead.

The Tigers were able to get within two points in the final quarter, but Brantley and Kelshun Campbell’s 10 points in the quarter were too much to overcome.

Brantley finished the game with 20 points, while Campbell had 12.

The Trojans will be back in action on Thursday night when they travel to take on Greenville. The Trojans pulled out a 54-51 win on Friday night.

“We’ll be fine,” Tuck said. “We have three days. Thank God for those three days. We will have time to work on some stuff. They probably won’t like me the next two days.”