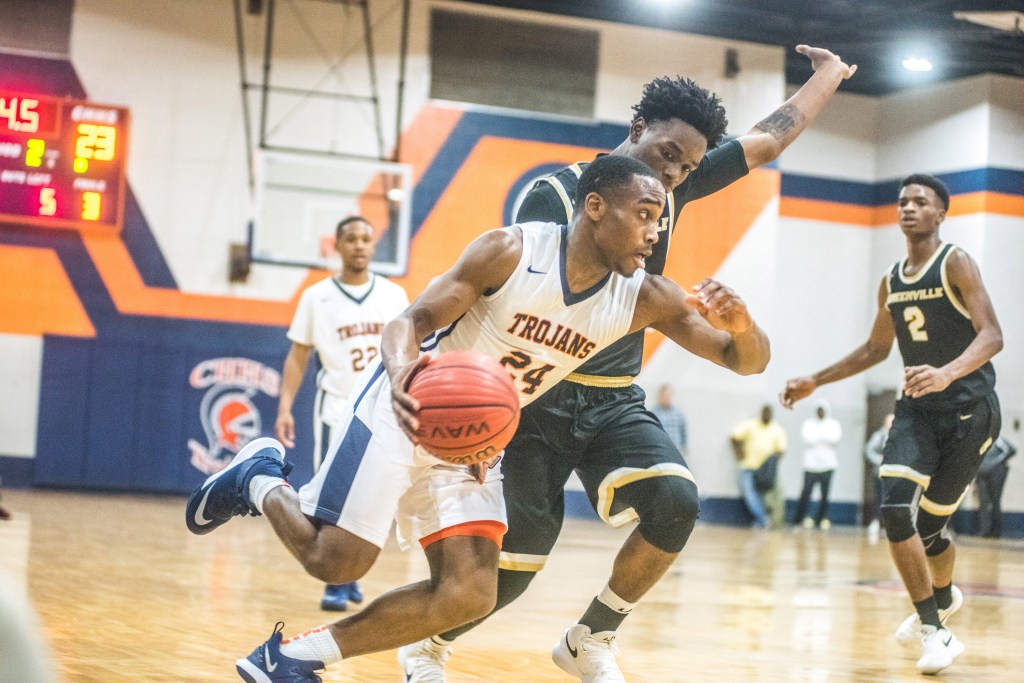 Jalen Tuck runs the court against the Greenville Tigers on Friday night in Troy.

The Charles Henderson Trojans held off the Greenville Tigers for a 54-51 in front of a lively crowd in Troy on Friday night.

The Trojans trailed for most of the first half before being able to run down the Tigers to secure the important area win.

“A lot of heart and a lot of compassion,” said head coach Shelby Tuck. “They fought their butts off. We had a lead and then we were down. The guys kept fighting and digging. We missed some free throws tonight, but we made them when it counted.”

The Trojans entered the contest with a game plan that featured their defense guarding the three-point line. In the first half that led to some easy points in the paint.

“We were focused on the perimeter,” Tuck said. “They are a perimeter oriented team. We focused on defense. We wanted to give them the two and not the three. When they get hot its tough for us to guard.”

The Trojans jumped out to a 2-0 lead on a basket by Keith Wheeler. That would be the last time the Trojans would see the lead until late in the second quarter.

The Trojans remained hot to open the third quarter when they scored the quarter’s first six points to go up by 10 at 32-22.

Kelshun Campbell scored six points in the quarter for the Trojans. The Tigers closed out the quarter strong and went into the fourth quarter holding a 39-37 lead.

In the fourth it was Campbell and Jalen Tuck for the Trojans. The two Trojans accounted for 10 points in the quarter to help the Trojans retake and hold the lead.

The Tigers did have their chances. With 19 seconds remaining and Wheeler on the line the Trojans had the opportunity to put the game away. Wheeler missed the front end of the one and one but picked up his own rebound sending him back to the line. Wheeler connected on a free throw increasing the Trojans lead to three.

With time dwindling down, the Tigers had one more opportunity to heave up a three, but it went wide left to give the Trojans the win.

Campbell led the Trojans with 17 points, while Jalen Tuck finished with 12.

“Jalen and Kelshun, I’ll go to war with all 14, but those guys really carry the team,” Tuck said. “I appreciate their leadership and all of their hard work.”

The Trojans will be back in action on Monday when they host Dothan.

One game at a time,” Tuck said. “We want to get better every game that we play. That is my goal. Tonight I thought we grew up big time.”