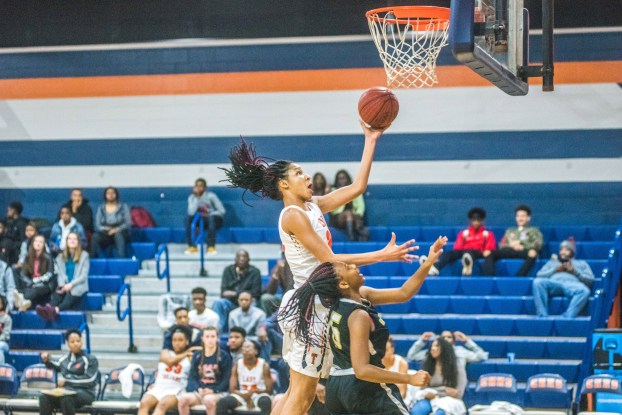 Messenger Photo/Jonah Enfinger Tatyana Siler puts up a shot for the Trojans against Greenville on Friday night in Troy. The Trojans beat the Tigers 62-31.

The No. 1 Charles Henderson Lady Trojans continued their winning ways with a 62-31 win over area foe Greenville on Friday evening in Troy.

The win for the Trojans improves their area record to 2-0.

“I saw that they were improving in everything,” said head coach Dyneshia Jones. “Playing all those games over the break against talented teams are helping us right now. That is why we did that.”

The Trojans did get tested at times and coach Jones welcomed the adversity.

The Tigers were in shouting distance after the first half as they went into the locker room trailing the Trojans 39-20.

Trojan Maori Davenport was a force in the first half, scoring 19 of the team’s 39 points.

Davenport added 12 more points and finished with a total of 31 points.

The Trojans picked up their second area win on Friday. Now for coach Jones, it’s on to the next two.

“It’s very big,” Coach Jones said. “We really need to focus on winning the next two. Hopefully we can host it.”

The Trojans will step out of area play on Monday when they host Dothan.

The Charles Henderson Trojans held off the Greenville Tigers for a 54-51 in front of a lively crowd in Troy... read more