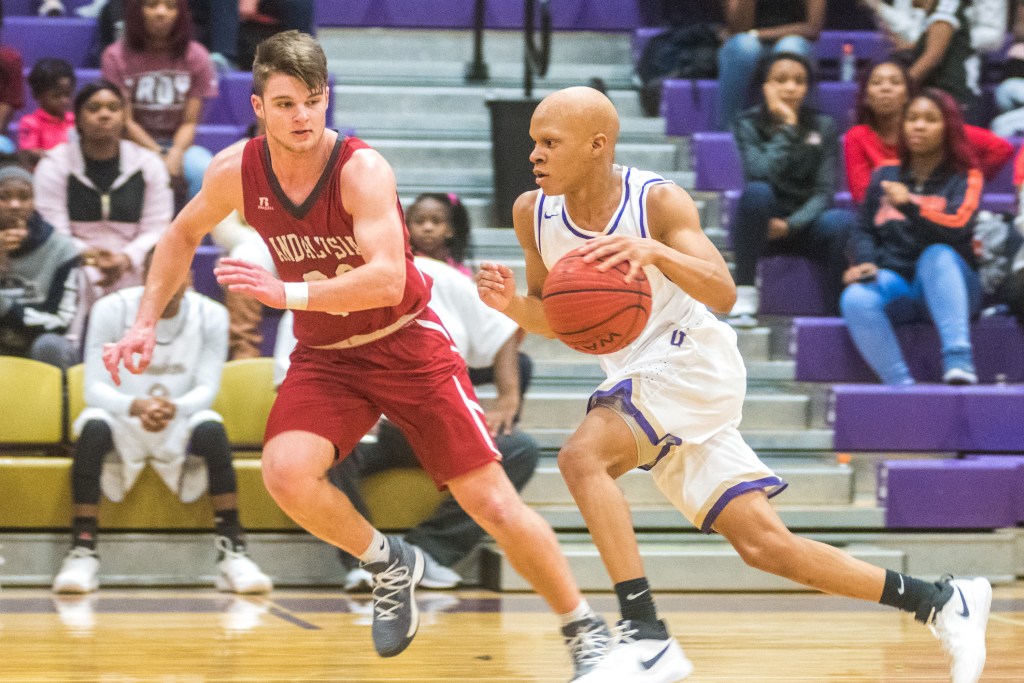 Messenger Photo/Jonah Enfinger Michael Hollis drives the lane against Andalusia on Thursday night in Goshen. The Eagles fell to the Bulldogs 52-38.

The Goshen boy’s basketball team struggled out of the gates offensively and could never recover in their 52-38 loss to Andalusia on Thursday night in Goshen.

The Eagles scored just eight points in the opening quarter and 38 on the night. Head coach Ethan Carroll contributed Goshen’s lack of scoring to fatigue.

“We were able to pull out a win against Bullock County. We were hoping that would carry over. It did for two quarters. The third quarter killed us. That is the hump we couldn’t get over.”

After entering the second quarter trailing 9-8, the Eagles were able to grab a slim lead heading into the half at 21-19. Zack Alford helped out by scoring eight points in the quarter.

Alford finished the game with 15 points.

Michael Hollis also had a good half for the Eagles by scoring six of his nine points. All nine points came from behind the arc.

“They attacked,” Carroll said. “Like I said I think we are a little worn down. We may have run a little too much. Overall we just have to play a little better defense.”

Things began to unravel for the Eagles a bit in the third quarter. The Bulldogs outscored the Eagles 14-8 and took a 33-29 lead into the fourth quarter.

Things got overheated in the fourth quarter as each team was called for a technical foul. In the end the Bulldogs put up 19 more points and cruised to the win.

The Eagles will begin area play against Luverne this evening and coach Carroll will be going up against a familiar face.

“It’s going to be a good one,” Carroll said. “They are playing great basketball. Coach (Richard) Dorsey, like always, is doing a phenomenal job. I was fortunate enough to coach under coach Dorsey at Luverne and I learned a lot from him. It’s going to be a hard fought game. We have to continue to do what we do and work on getting better.”