Gaining momentum: Lady Eagles ride into area play with a 50-40 win over Andalusia 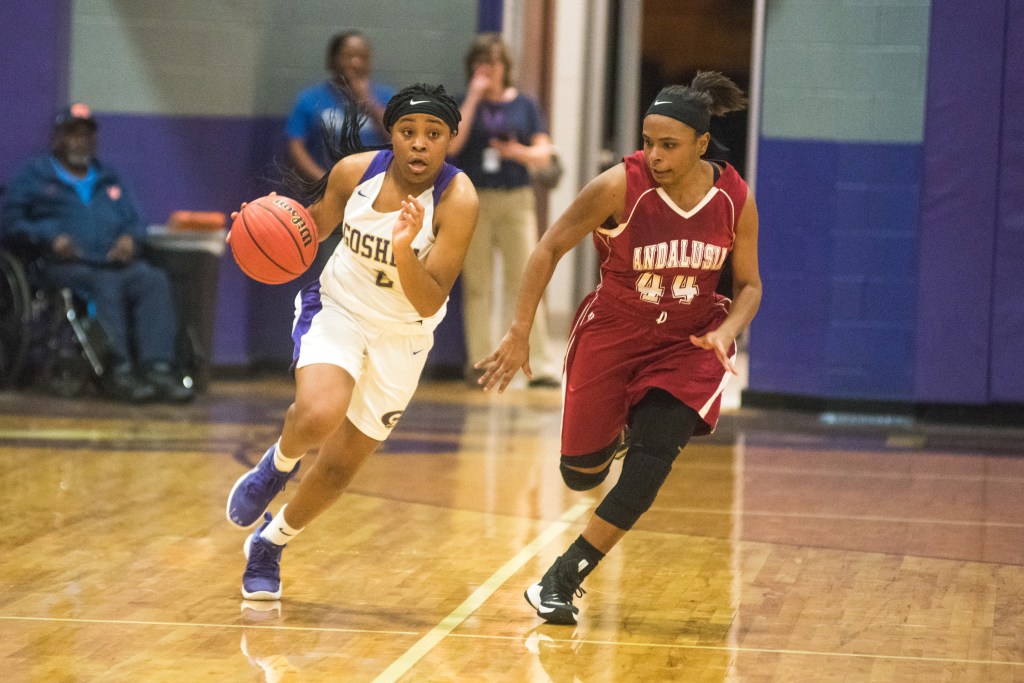 Photo/Jonah Enfinger Bree Griffin races down the court for the Goshen Eagles in their game against Andalusia on Thursday night in Goshen.

The Goshen Lady Eagles survived a late Andalusia surge in the second half in their 50-40 win over the Bulldogs on Thursday night in Goshen.

The win for the Eagles improves their record on the season to 6-2.

With area play set to begin today against Luverne, head coach Fred Lowery planned to rest both Bree Griffin and Jada Hall when he could during the game. He got his wish in the third quarter due to the strong play of his team.

“We played a great first half,” Lowery said. “I sat them for almost the entire third quarter to get them rest. I thought we looked ok. We started to look sluggish late. I really like what I saw out of the younger girls in the second quarter. We played good defensively, but we have to do a better job rebounding defensively.”

The Eagles totaled 26 points in the opening half after they scored 13 in both the first and second quarters. Griffin and Hall combined to score 20 of those 26 points. Bree ended the first half with 13 points.

The Eagles took a 26-16 lead into the locker room at halftime.

The Bulldogs were able to get to within five points in the final quarter after entering the fourth down 38-26. Griffin hit some free throws down the stretch allowing the Eagles to hold on to the 10-point win.

The Eagles begin area play this evening when they travel east to take on Luverne in the area opener. Lowery hopes they can carry over the momentum they gained with Thursday night’s win.

“That’s momentum,” Lowery said about the win. “It looks like Jada is starting to find it. She hit some three’s. She is finding her shot and getting into rhythm. Getting a win and not having a loss on our minds is big.”

The Eagles had just five games under their belt heading into the Christmas break. Three games later, Lowery believes the Eagles are still trying to knock off the rust.

“We are still rusty,” Lowery said. “This time last year we had played 15 or 16 games. We are playing teams that have been playing. I still feel pretty good about what we are able to do.”

The Lady Eagles will take on the Lady Tigers following the conclusion of the junior varsity boys game which is slated to begin at 4:30 p.m.

“Our area is pretty tough,” Lowery said. “We can’t really lose to anyone. Luverne is 0-2 in the area. I know they are going to be ready to play. We have to go there and it’s going to be a hostile environment. I think our kids are ready for the test.”