Back at it: Hollis back on the sidelines with the Patriots 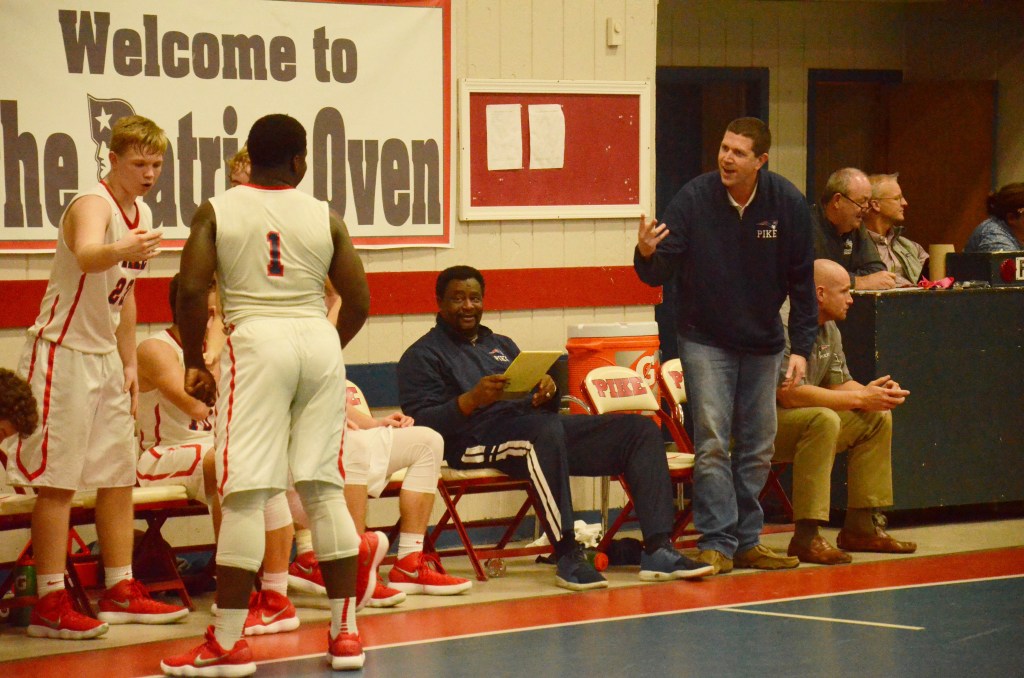 Former Charles Henderson head basketball coach Carl Hollis has returned to the bench in 2017 as an assistant at Pike Liberal Arts. Above: Hollis (left) interacts with the players on the bench.

Former long-time head coach of Charles Henderson basketball Carl Hollis is back on a basketball sideline as an assistant at Pike Liberal Arts.

Hollis spent 21 years pacing the sideline at Charles Henderson. After taking a year off away from the game, he felt like it was time to get back in.

“I am having a great time enjoying the kids and coach (Allen) Ponder,” Hollis said. “I’m trying to do whatever I can to help. I am learning a lot from the kids as well as the coaching staff.”

Hollis ended his tenure as a Trojan following the 2016 season. Hollis had the opportunity to join Ponder’s staff, but decided it was not the right time.

“I had an opportunity to go out last year and help out,” Hollis said. “I decided to stay away from the game for a year to do some things with myself and family. The opportunity presented itself (this year) and I agreed to share whatever I could to help them.”

Hollis is not a full-time assistant coach for the Patriots. He comes and goes when he likes, but so far this year, he has been a mainstay on the Patriots bench during games.

Hollis is no stranger to being on the bench in a non-head coaching role. Prior to his days as head coach of the Trojans, Hollis spent 17 years as an assistant coach.

“I had a knack of building strong B-team kids,” Hollis said. “I was an assistant varsity coach during those times. I had a chance to learn a lot from coach Kevin Griffin. I spent my second nine years with him. I had a pretty good background of basketball.”

During his nearly 40 years on the bench, Hollis learned a lot about the game and about coaching, something that continues today with the Patriots.

Hollis has always had a passion to help younger kids both in basketball and in life. Even though he is no longer a head coach, Hollis still takes time to help teach those lessons to his players.

There is an obvious transition between being a head coach and an assistant, but it is one that Hollis has taken in stride.

“I am more relaxed. It has been a blessing for me to be able to actually be on the sideline coaching again.”

The Patriots are 7-4 this season and have won both their games since the holiday break.

As for Hollis, the coach still has the ambition to be a head coach again when the time is right.

“If the opportunity comes and the door opens somewhere I feel like I am going to be moving,” Hollis said. “I think that is what I am called to do and I feel like that is what God gifted me to do. I feel like if Jim Boeheim can still steer the ship at Syracuse in his 70s, I ought to be able to do it in my early 60s.