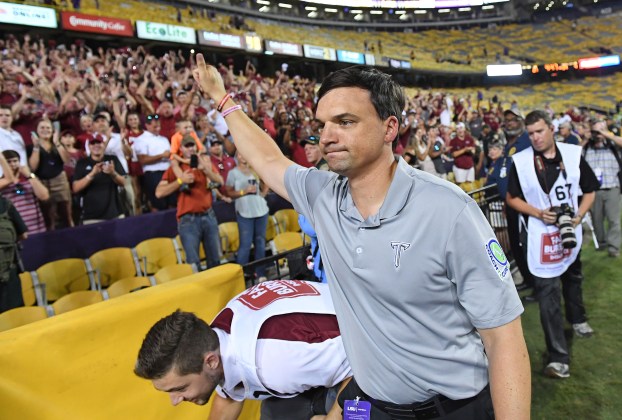 Troy head coach Neal Brown’s name has been thrown around in coaching vacancies since last offseason and multiple reports circulated Monday that he had interviewed for the University of Arizona head coaching position.

Former Wildcat head coach Rich Rodriguez was fired amid allegations of sexual harassment and an affair surfaced on January 3.

Brown was named as a possible coaching candidate for the head coaching position at Arkansas shortly after the season, but it was later reported that he told his assistants he would be back next season.

WSFA’s Maria Martin reported Monday night that Brown has interviewed for the Arizona head coaching position and is considered one of the school’s top candidates.

Officials with Troy Athletics would not confirm if the reports were accurate.

Brown is not alone as a candidate. Former Texas A&M head coach Kevin Sumlin is also a name to watch. Many reports have named Sumlin as the top candidate for the position although Yahoo insider Jordan Schultz named Brown a “legit candidate”.

Brown, 37, has been head coach of the Trojans for the last three seasons. In the last two years Brown has led the Trojans to a 21-5 record. The Trojans are 25-13 under Brown overall.

Gun manufacturer to bring 360-plus jobs to Troy

Kimber Manufacturing, an upscale firearms manufacturer, is coming to Troy and will bring more than 360 jobs to the community.... read more