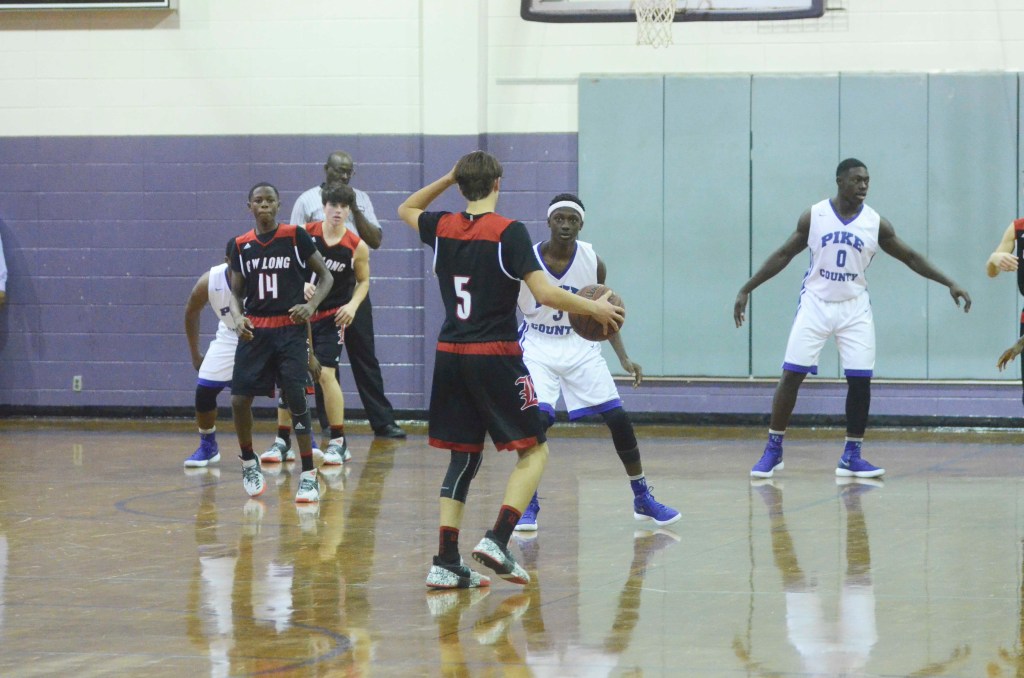 Above: Elisha Green (3) plays defense against the G.W. Long Rebels on Friday afternoon in Brundidge.

In a rare mid-week matinee, the Pike County Bulldogs dominated the G.W. Long Rebels 64-29 on Friday afternoon in Brundidge.

The win for the Bulldogs gives them their second win in a row after the holiday break and their fourth win overall.

“In the first half I thought we were a little flat,” said head coach Doug Holland. “I was very pleased with the intensity they brought in the second half. I thought we did a good job at not turning the ball over as much. We are getting better on defense.”

The gym was full of students eager to watch their Bulldogs during the school day. Holland believes they brought some extra energy into the game.

“It’s always fun to have some of the kids that don’t normally have a chance to get out to the game,” Holland said. “The team was every excited too both last night and today. I thought we played a little too excited in the first half.”

Holland took Friday’s game as an opportunity to empty his bench and give everybody some valuable playing time.

“We are going to have to have a lot of those players down the stretch,” Holland said. “Last night (Thursday) we had a lot of guys get into early foul trouble. One thing we are working on is getting some of those guys quality minutes even in tight games.”

The Bulldogs plan for every game is pushing the ball down the court. On Friday they did that from the opening tip; keeping the Rebels on their heels.

“That is what we are working on for the second half (of the season),” Holland said. “We want to increase our intensity. That’s why a lot of nights we have turnovers. Because we push the pace.”

Jahzarian Lampley knocked down a pair of three pointers in the opening quarter and the Bulldogs carried a 17-11 lead into the second.

The Bulldogs outscored the Rebels 17-7 in the second quarter to take a 34-19 lead into the locker room at halftime.

There were 18 points scored in the third quarter, 14 of them by the Bulldogs. Andres Burney, who scored four points in the first half, scored five points in the quarter.

The Bulldogs won their area opener on Thursday over Daleville. They travel to take on Providence in their second area game on Tuesday.

“Providence will be tough,” Holland said. “(A) Very well-coached team as usual. We are looking forward to going down there and try to get a win.”