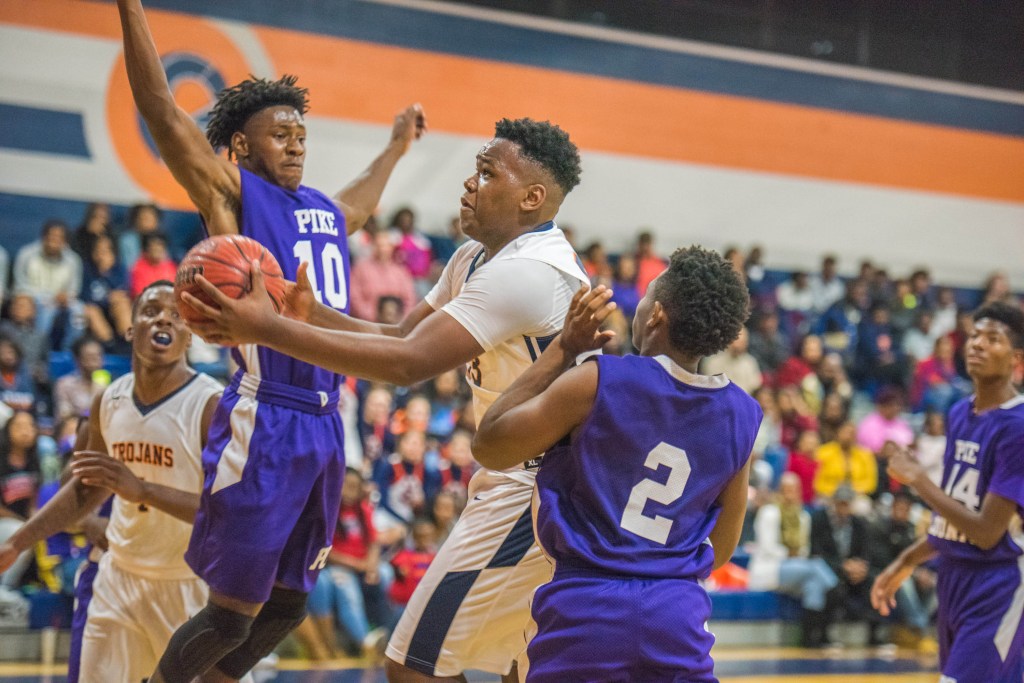 photo/Jonah Enfinger Laertis Brantley goes up for a shot against Pike County earlier in the season.

Charles Henderson boys basketball coach Shelby Tuck is excited about things to come in the second half of the season.

The Trojans closed out the 2017 portion of their schedule with a strong showing in a tournament at Sandestin Beach. With the New Year now underway, the Trojans sit at 7-6.

“We are playing good basketball and I am proud of the effort,” Tuck said. “We are at a point to where we are missing free throws and are having turnovers late that are hurting us. As far as effort goes, as we head into 2018 I am really excited about it.”

The Trojans played a lot of basketball in the latter stages of December, including five games in tournament-style play.

“That tournament was the best thing that could ever happen to us as far as being able to bond as a team and the experience the guys that went had,” Tuck said. “It was just an experience.

“The basketball was phenomenal. We played teams from Kentucky and Tennessee. We ended up playing five games down there and finished 3-2. It was  a good tournament for us.”

The Trojans have played their fair share of close games, including a one-point loss to 7A Auburn and an overtime win over rival Pike County. With a little tweaking, Tuck believes his team could have easily won a few more games while also improving on their record.

“We could easily be 11-1 or 11-2,” Tuck said. “All this stuff is mental. It is something that we have been working hard. We had three good hard days of practice where we got things situated. 2018 is going to be a great year for us.”

The fact that many of their games have been in reach gives the team confidence according to Tuck. Now it’s about getting the job done.

“From a coaching standpoint you want those games back, but unfortunately we can’t,” Tuck said. “The only thing we can do is fix things now. The guys have bought in.”

During the break, Tuck compiled a list of stats from the early part of the schedule and when he showed them to the team, the players were surprised with what they saw.

“It was jaw-dropping for them,” Tuck said. “Practice has been phenomenal since then. They were able to see that we were missing 10 free throws a game and we are averaging losing by four points per game. Do the math. If you make free throws and get of turnovers then we are fine. For them to see that was an eye-opener for them.”

Tuck believes that their schedule played a factor in Charles Henderson’s current record.

“Some people tell me ‘You play a lot of good teams. Why do you play them so early?’” Tuck said. “That was my intention. The guys needed to be challenged early. They stood up in some of the games and then in some they had some mental breakdowns and it cost them.”

The Trojans return to the court on Friday night when they host BTW Magnet beginning with the junior varsity boys at 4:30 p.m.

“We have a game on Friday and we play Saturday and then we get into our area play,” Tuck said. “We are really looking forward to that. We have some good competition with Brew Tech and Greenville.