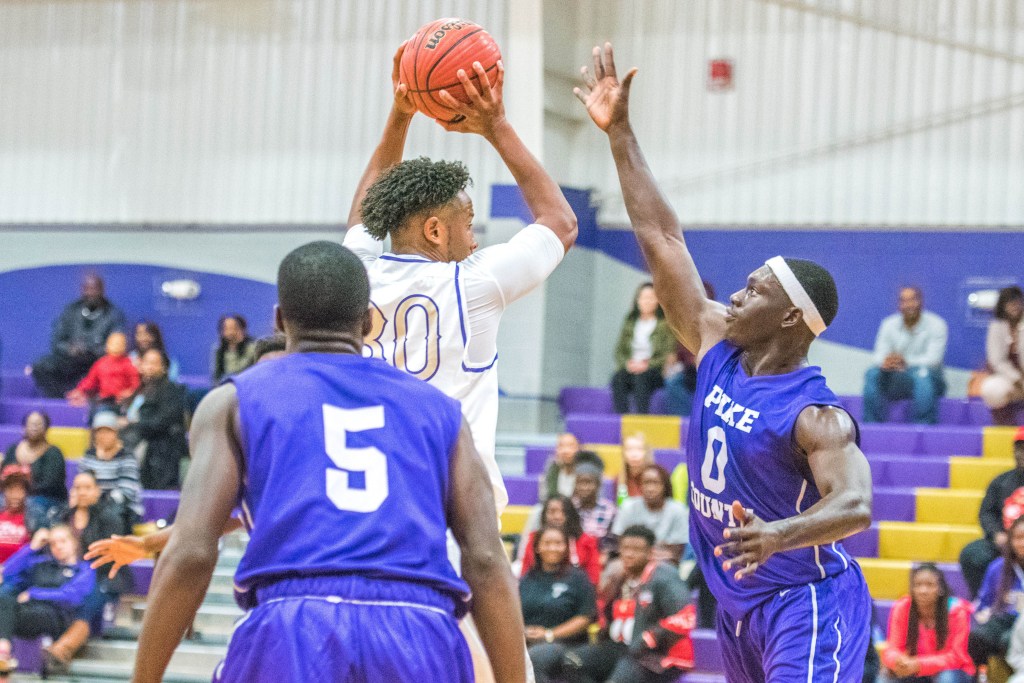 photo/Jonah Enfinger Newson goes up to block a shot against Goshen earlier this season.

Pike County Bulldogs head coach Doug Holland summed up his thought’s on the early part of the schedule with one word: close.

Pike County has played a stronger schedule to start the season and the games have have been tight.

“The first half I thought we played close,” Holland said. “I didn’t think we played as well as I thought we would. We have had so many games close and two overtime games. To be sitting at 2-5 or 2-6, it’s kind of frustrating.”

The Bulldogs have played a more competitive schedule than they have in other seasons, facing 5A Carroll in addition to their regular matchup with Charles Henderson High School.

“We understood we had an upgraded schedule,” Holland said. “I just thought we should have competed a little more.”

Holland and the Bulldogs used the time off to work on their game during much-needed practice time.

“We didn’t get to play in any tournaments,” Holland said. “I think the practice time was well-needed. We got our legs under us a little better. With that conditioning, we have to hope the second half will be a lot more rewarding than the first half.”

Holland has talked with his players regarding the close losses. The players have been told that if things went a little differently, their record could easily be flipped around.

“That is the one thing that I thought was very encouraging,” Holland said. “We were close and competitive with a lot of bigger teams. We could easily flip the record and that is encouraging. Now the question is where do we go from there? We have been in games and we have been battled-tested early. Now I hope we can translate it into wins in the second half of the season.”

The Bulldogs have two players in Andres Burney and Xavier Newson, that gives the Bulldogs needed size inside.

“I am very pleased with how Xavier controls the boards and how Burney plays all around,” Holland said. “Newson probably stands out to me the most. He does the little things you want out of a big man. He goes to the free-throw line, he boxes out and he does the dirty work.”
Missed free throws and too many turnovers have been a topic of conversation for Holland and the Bulldogs during the break.

The Bulldogs will open up area play against Providence next Tuesday night. Until then coach Holland would like to see his team improve on the transition game.

“Getting back in transition defense and picking up our defensive effort… is going to be key in deciding what we are going to do,” Holland said. “The main thing I focused on the break was us communicating on defense. I think we had a lot of breakdowns late in games that cost us.”

The Bulldogs will be back in action on Thursday when they travel to take on Daleville.