Historic year: Eagles lead they way in an exciting 2017 season 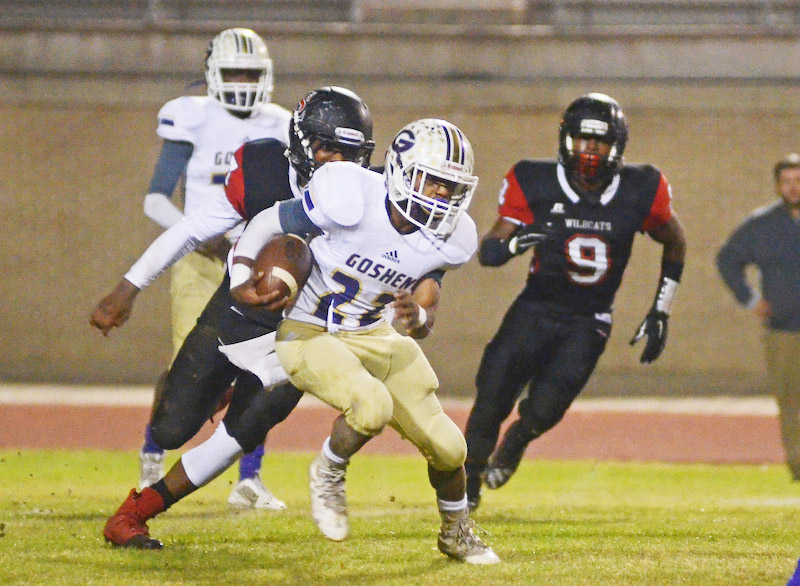 The Goshen Eagles went to their first semifinal in school history in what was an exciting 2017 season. Top: Damion Passmore runs the ball for the Eagles.

The 2017 football season provided fans with drama, excitement and a run at a championship.

The Goshen Eagles carried the mantle in the postseason. After advancing to the second round of the state playoffs in 2016, the Eagles advanced all the way to the semifinals for the first time in program history.

The Eagles finished the regular season with a 9-1 record. Their lone loss came to region rival Elba 20-14. The Bulldogs went on to win the region championship for the first time under head coach Bart Snyder.

The Eagles hosted Southern Choctaw in the opening round of the Class 2A state playoffs and knocked off the Indians 27-6.

The Eagles carried the opening round win into a round two victory over Thorsby 42-8, sending the Eagles to their first quarterfinal since 1991.

The win set the Eagles up for a semifinal showdown with Leroy in Goshen, a game that drew thousands of people to the town with a population of around 250 people.

The Eagles were in position to kick a potential game-winning field goal in foggy conditions against the Bears. Leroy blocked the kick and returned it for a touchdown to end the Eagles’ hope of a championship game appearance. The Eagles lost 28-21.

“We thought that going down there, that we got the ball in perfect position,” Snyder said. “I just don’t know how they got in, but they got in and made a great block. Both teams were deserving. Somebody had to come in second down here, and it just happened to be us.”

The Charles Henderson Trojans finished the regular season with a 6-4 record and advanced to the postseason.

For the second consecutive season the Trojans started the year with an 0-2 record after they dropped consecutive games against UMS-Wright, eventual state champions, and Carroll.

The Trojans went 6-2 the rest of the way and secured a spot in the playoffs after finishing 4-2 in region play, good enough for third place.

The Trojans closed out the regular season with a 14-7 win over 7A Enterprise and drew Clay Central in the opening round of the playoffs. The Trojans offense struggled to score points in a 42-14 loss.

“My hat is off to our coaches, this staff and these kids for handling the new things we were trying to teach, and they took it all in stride,” said head coach Brad McCoy.

The Pike Patriots jumped out of the gates quickly in 2017 with a 4-0 record. The Patriots picked up wins against Kingwood Christian, Clarke Prep, Abbeville Christian and Fort Dale in the region opener.

The Patriots followed that up with a tough two-game stretch against two teams in Monroe Academy and Autauga Academy who played in the state championship. The Patriots dropped both games by scores of 33-6 and 40-26.

The Patriots rebounded with three straight wins against Glenwood, Northside and Hooper Academy before dropping their final two games of the season.

The Patriots were forced to travel in round one after finishing in fourth place in region play and fell to Tuscaloosa Academy 28-6, ending their season.

The Pike County Bulldogs played perhaps the most unusual schedule in 2017. They played five of their first six games at home before closing the season with four straight road games.

The Bulldogs went into the playoffs as a two seed and took on Mobile Christian in the opening round. For the fifth game in a row, the Bulldogs played on the road and fell to the Leopards 21-0.

The Ariton Purple Cats finished the season with a 10-2 record after making it to the second round of the state playoffs. After knocking off R.C. Hatch in round one 44-14, they fell to Leroy 35-21 in the second round.

The Zion Chapel Rebels welcomed in new coach Randy Bryant this season, who took over for Bubba Nall who left after one year at the helm.

The Rebels dropped their first seven games before picking up two wins in their final three games against Calhoun and Pleasant Home. The Rebels finished the season 2-8.