Man of the hour: Troy’s Chunn selected to play in the East-West Shrine Game in St. Petersburg 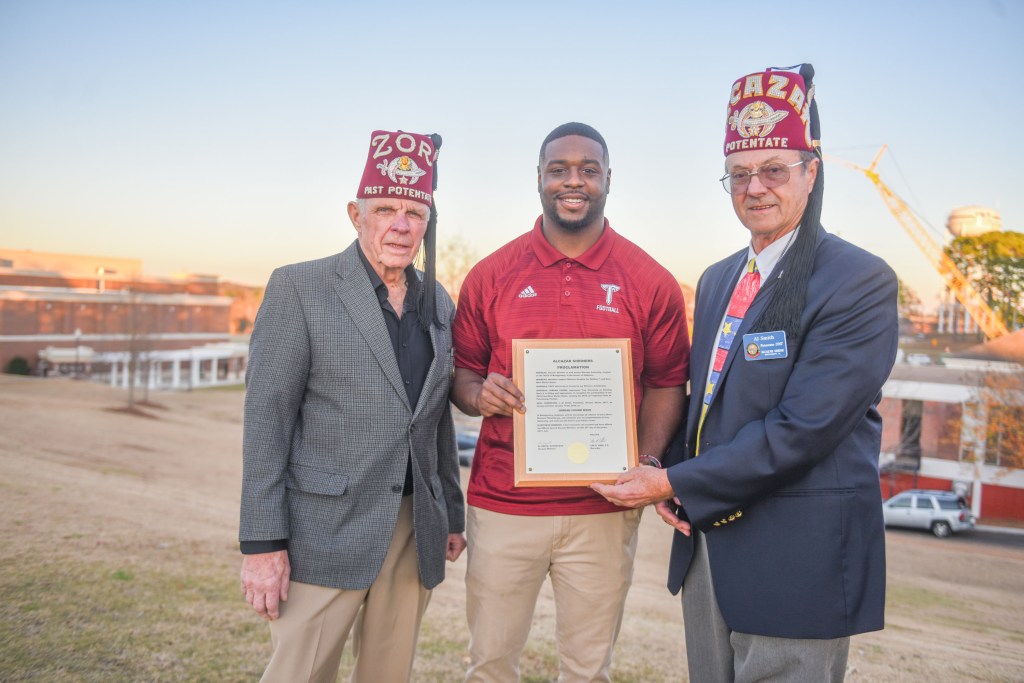 Jordan Chunn (center) was given a proclamation on Thursday by the president of the Troy Shrine Club Homer Hamann and the potentate of the Alcazar Shriners Al Smith stating that the week of January 14 will be named Jordan Chunn Week. Chunn will play in the East West Shrine Game in St. Petersburg on January 20.

Troy running back Jordan Chunn was selected to take part in the 93 annual East-West Shrine Bowl in St. Petersburg earlier this month. On Thursday Chunn was given a proclamation from the Alcazar Shriners stating that the week of January 14 will be named Jordan Chunn Week in Montgomery.

Chunn, along with Auburns Austin Golson, was the first player to receive a proclamation for playing in the Shrine game.

The Shrine game was first played in 1925 and it is the nation’s oldest all-star game. The game is played to help support Shriners Hospitals for Children.

Each year players and coaches are able to visit the Shriners Hospital while meeting the children.

Chunn’s selection to the game involved more than his ability’s on the football field.

“Shriners seek outstanding football players to play in the East-West Game and to represent their University,” said the Potentate of the Alcazar Shriners Club Al Smith. “They are community minded individuals that makes things aware to help other people.”

“It means a lot knowing I have more than a football title with my name,” Chunn said. “I let my character speak for myself. I am really proud to be able to play in this game because it has a big thing with the kids.”

Although football is a big reason Chunn will be attending St. Petersburg, he is also looking forward to the opportunity to visiting with the children.

“It’s a lot of fun,” Chunn said. “We went to a hospital in New Orleans,” Chunn said. “The smile on those kids faces just brightens up your day. They let you know that you are giving them joy. It’s a big accomplishment.”

On the field Jordan will have the opportunity to play in one more game as a college player. Chunn finished this year with 774 yards and 10 touchdowns. He became Troy’s all-time touchdown leader this season with 47.

Chunn is there to interact with the local children, but he is also there on business.

“You are there for football, but then again you get to help kids and bring joy to their lives,” Chunn said. “On top of that you have a lot of scouts and you get to continue to showcase your skills and talent.”

Chunn considers himself to be bigger back, but during the week of the game he plans on showing the scouts on hand his speed and footwork.

“I am looking forward to, I am a big back, possibly showing off my speed and good footwork, vision and being able to catch out of the backfield,” Chunn said.

Chunn will be able to represent the Troy Trojans at 2 p.m. on January 20 at Tropicana Field in St. Petersburg.

“It’s an honor to be able to represent the school,” Chunn said. “They have done a lot of for me. For me to have Troy on back and on my helmet is going to be a great time.”