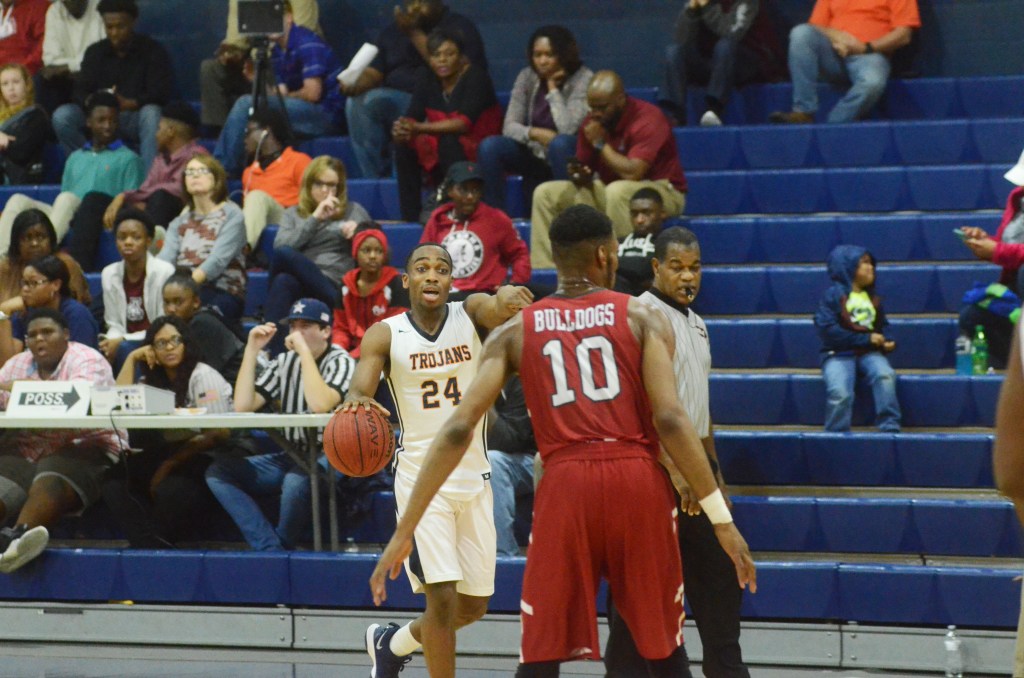 The Charles Henderson Trojans never lead during their 74-63 loss to Andalusia on Monday night in Troy.

Another slow start led to the lackluster finish according to head coach Shelby Tuck.

“We are just living on the edge,” Tuck said. “That has been our thing all year. We didn’t come out and play hard at the beginning of the game and that was it.”

The Trojans trailed by as many as nine in the first half. Charles Henderson’s three-point shot helped the Trojans keep the game in single digits heading into half time. In the first half the Trojans connected on eight three point shots including three by big man Laertis Brantley.

“We have been playing helter skelter basketball,” Tuck said. “It has been a different team each quarter. But we will fix it.”

The Trojans went into halftime trailing by nine at 40-31.

The Trojans trailed by as many as 17 points in the third before going into the final period down 56-39. The Trojans battled back in the fourth quarter thanks some timely Andalusia turnovers and fouls. With 1:39 remaining in the game the Trojans dwindled their deficit down to four.

With twenty seconds remaining and the Trojans down 68-63, Jacoby Jones committed a technical foul when he wrestled an Andalusia player to the ground. After a lengthy stay on the free throw line, Andalusia scored four points to end Charles Henderson’s chances.

Jalen Tuck led the Trojans in scoring with 17 points, while Brantley finished with 15.

The Lady Trojans were also in action on Monday afternoon. The Trojans won comfortably, defeating Andalusia 46-11.

Maori Davenport led the Trojans with 12 points, while Niaira Jones had eight and Tatyana Siler had six.

The Trojan boys will be back in action Today when they play in the Handley Tournament. The Lady Trojans will participate in the Bob Jones Tournament on Wednesday.