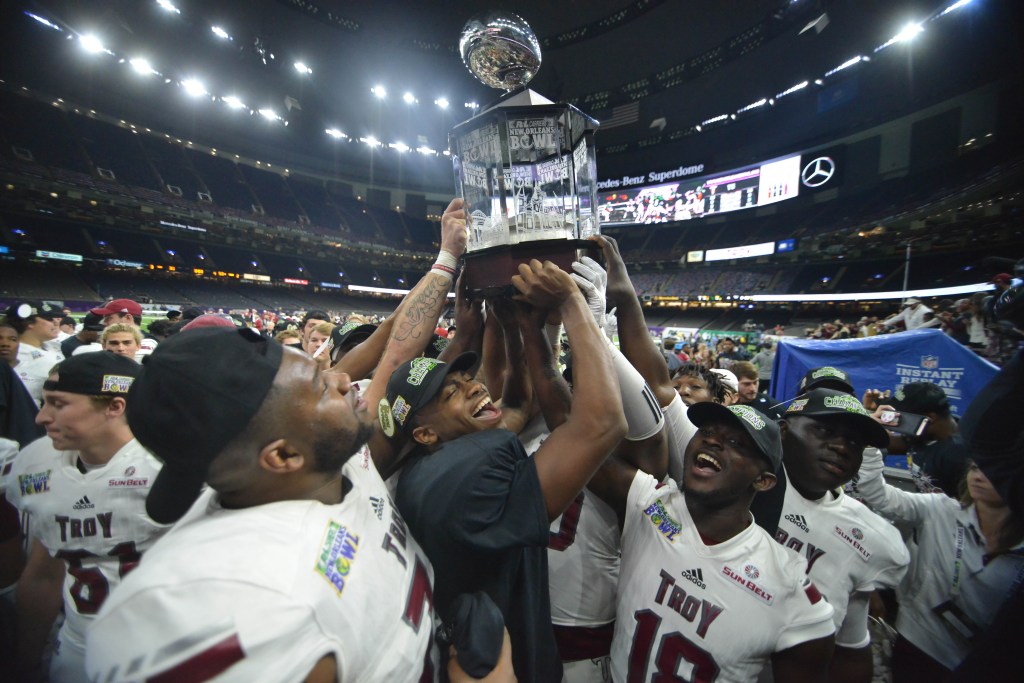 The 2017 Trojans became the first team in the program’s Division I history to win 11 games on Saturday afternoon when they defeated North Texas 50-30 in the R&L Carriers New Orleans Bowl.

The Trojans finished he season 11-2. They have won back-to-back bowl games for the first time in program history.

“It’s a great day not only for the football program, but for Troy University,” said head coach Neal Brown. “There aren’t many programs doing that. We are very appreciative of our administration, our fans, our coaching staff and most of all our players.”

Troy’s 50 points on Saturday was the most points put up in New Orleans Bowl history. They never trailed at any point and led by as many as 30.

“Today was kind of a microcosm of our season,” Brown said. “This season has been up and down and not easy. Today we got off to a very fast start. We hit a lull and had some turnovers. We came out and dominated the second half of the football game. I thought this was a program win.”

The Trojans entered the week with seven players out due to injury including Blace Brown and Emmanuel Thompson. The number grew to eight when the Deondre Douglas went down early in the game.

“For us to have the next man up mentality and go out and perform well and win is a really good feeling, Brown said.

The Troy Trojans stormed out to a quick 15-0 lead over the Mean Green.

The Trojans took the opening possession 80 yards on nine plays ending with a one-yard touchdown run by senior Josh Anderson.

After a fumble on the Mean Green’s second play the Trojans took over on the Mean Green 14. Three plays later Josh Anderson rumbled his way in for his second touchdown of the game. John Johnson added a two-point conversion to bring the score to 15-0.

“I knew I wanted to get off to a good start, because Jordan was out. I wanted to be the next man up” Anderson said.

Anderson finished the game with 113 yards on 22 carries. It was Anderson’s first 100-yard game.

“As disappointed as I was for Jordan, I was excited for Josh,” Brown said. “He’s going to get a chance to play at the next level, just like Jordan is.”

North Texas cut their deficit in half with 4:07 left in the first when Rico Bussey hauled in Mason Fine touchdown from 12 yards out to bring the score to 15-7.

Troy quarterback Brandon Silvers connected on his first 11 pass attempts, good enough for second most in New Orleans Bowl History. Early in the second quarter he threaded the needle and found Damion Willis in the corner of the end zone for a touchdown bringing the score to 22-7.

Silvers had his 12th pass fall incomplete and on the next play a snap flew over his head and into the arms of Colton McDonald who ran it in from 55-yards out for a Mean Green touchdown bringing the score to 22-13 after a failed two-point conversion attempt.

The Mean Green drew closer with 1:34 remaining in the half when Fine found Michael Lawrence for a 13-yard touchdown. The Trojans then entered the locker room holding a slim 22-20 lead.

The Trojans forced an interception on the Mean Green’s opening drive of the first half. Cedarius Rookard deflected a Fine pass into the arms of Hunter Reese. After a 23-yard completion to Willis, Silvers called his own number and ran it in from two yards out to increase Troy’s lead to 29-20.

Silvers impressive afternoon continued when he connected on a 59-yard touchdown pass to Tevaris McCormick to bring the score to 36-20 with 10:28 remaining. It was the longest touchdown pass in Troy’s bowl history.

On their following drive, the Mean Green had the ball for 13 plays ending with a 24-yard field goal by Trevor Moore to bring the score to 36-23 in favor of the Trojans with 4:20 remaining in the third.

Tyler Murray sacked Fine, forcing a fumble in North Texas territory. The Trojans took over on the 33. Troy native John Johnson caught a Silvers pass and took it 20 yards for a touchdown bringing the score to 43-23.

The Trojans closed out their scoring late in the fourth when Silvers threw his fourth touchdown of the game. He connected with Willis for his second score to bring the score to 50-23.

“Once I caught the first pass, I knew it was going to be a really good day,” Willis said. “Brandon throws the ball where only you can catch it.”

The Mean Green scored the final touchdown of the game with 28 seconds remaining when Fine connected with Turner Smiley on a 17-yard pass.

Silvers finished the game completing 24 of his 31 passes for 306 yards and four touchdowns. He became the ninth quarterback in New Orleans Bowl history to top 300 yards.

“He played at a high level,” Brown said. “For him to not make an all-conference team, I don’t understand. He’s as god a quarterback to ever play at Troy University. He not only threw the ball, he managed the game.”

With the victory, Troy is now 3-1 all-time in the R&L Carriers New Orleans Bowl. Only Southern Mississippi and Louisiana with four victories have more.