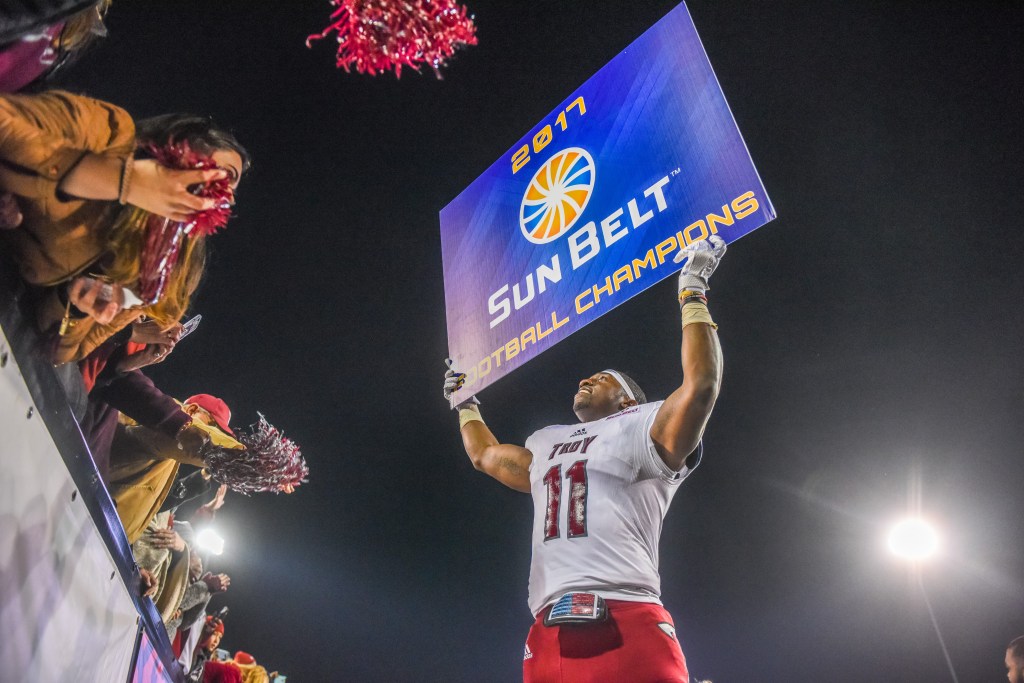 Messenger Photo/Jonah enfinger Tevaris McCormick celebrates with the Trojan fans after Troy’s win over Arkansas State on December 2. The Trojans will play North Texas in the New Orleans Bowl on Saturday.

The Troy Trojans and the North Texas Mean Green both played in the Sun Belt Conference together from 2003 and 2012. That is not the only connection between the two schools.

Troy and North Texas will rekindle an old rivalry this Saturday afternoon when they take part in the R&L New Orleans Bowl.

The Trojans and the Mean Green were in the top of the class in the early days of the conference. The teams combined to win at least a share of 9 of the first 10 conference championships.

“They are an old Sun Belt rival,” said Troy head coach Neal Brown. “When the conference first started, they were the powerhouse.  They won several conference championships until we were able to knock them off in 2006.”

Troy and North Texas have more connections with one another than an old conference rivalry. Brown shares a friendship with North Texas head coach Seth Littrell.

“I am very familiar with him,” Brown said. “He is a really good friend of mine. I respect what he has done. It’s two weeks in a row we are playing two coaches that are my better friends. He has done a great job.”

Brown’s familiarity with the Mean Green coaching staff doesn’t stop there. He is also familiar with the offensive and defensive coordinators.

“There are a lot of relationships between the two staffs,” Brown said.

“He has done a great job,” Brown said. “Two years and he is turning around that program. They were bowl eligible last year and played Army. To get to nine wins and play in a conference championship game is really remarkable.”

The two teams will officially kickoff the 2017-2018 bowl schedule on Saturday at noon. The game will be televised on ESPN.

“Our team is excited to represent the Sun Belt Conference,” Brown said. “I believe we are going to play the first bowl game of the bowl season, which is a reward for our players.