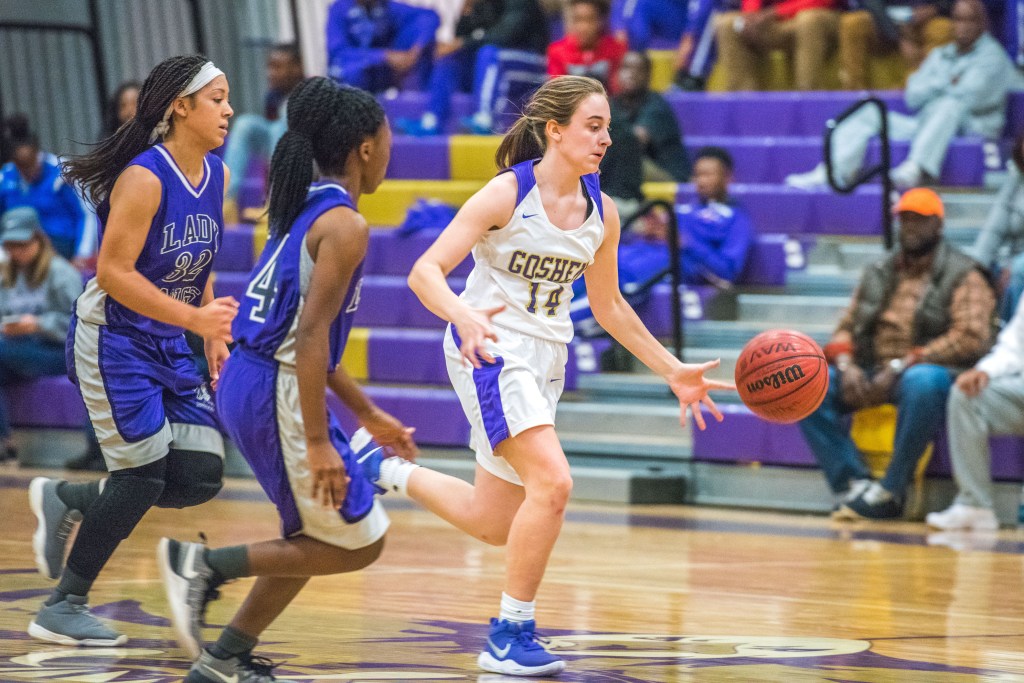 The Goshen Lady Eagles held the Pike County Bulldogs scoreless in the second quarter and rolled to a comfortable 44-29 win over their rivals from Brundidge on Tuesday night.

The win for the Bulldogs gives them a 2-0 record to start the year.
“We won,” said Goshen head coach Fred Lowery. “Pike County played a pretty good ball game and they played us tough. I am pleased with the performance of the girls and their hustle. There are things we need to work on.”

The Bulldogs were in the game early and led in the opening quarter before things got away from them.

“There were five possessions where they took an eight-point lead,” said head coach Todd Reynolds. “We had our opportunities and we missed free throws or missed open shots. With a young team, that begins to wear on them a bit.”

Endurance was a big question mark for the Eagles on Tuesday night after playing their season opener the night prior.

“They looked OK endurance-wise,” Lowery said. “We wanted to play man in the first quarter. I was concerned about that after playing last night (Monday). They looked good overall. I am pleased with them. We are still rusty; this was just our second game.”

“The first half they (the Bulldogs) tried to do things their own way,” Carroll said. “I made some adjustments and basically told them ‘If you don’t do it my way, then you sit.’”

After going into halftime trailing 24-10, the Bulldogs turned it up in the second half and got to within nine, but couldn’t get any closer.

“We started working it and spreading the ball around,” Carroll said. “I am still not getting any points from my post. That’s the painful thing. His post was effective enough to give them easy points. I am not getting those easy points, so it’s a struggle.”

Bree Griffin led the Eagles in scoring with 12, while Jamecia Berry had 11 and Jada Hall had 10.

The Eagles will be back in action on Friday when they head to Brantley to take part in the Brantley Christmas Tournament.

The Lady Bulldogs will return to play Geneva.