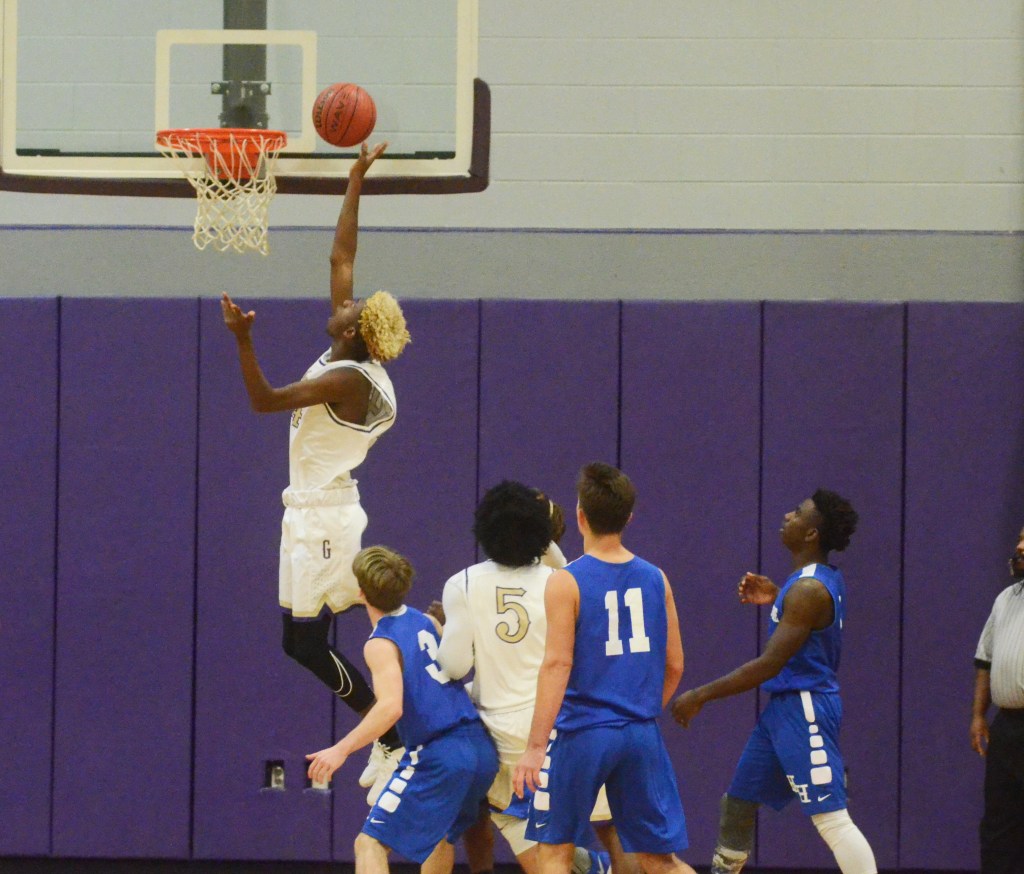 Tavares Adams goes up for layup during Goshen’s 67-33 win over Highland Home on Monday night. Adams finished the game with 16 points for the Eagles.

It took longer than most, but the Goshen Eagles got their season under way on Monday night with a 67-33 win over Highland Home.

Due to the football team’s long playoff run, the Eagles waited to get their basketball season started; but Monday’s game was worth it.

“We are excited,” said head coach Ethan Carroll. “I thought we played well overall. We are a little rusty. We had some turnovers and bad decisions, but overall I am proud of the team and their effort.”

The Eagles jumped out to an easy and comfortable 13-0 lead until Highland Home scored their first points nearly four minutes in the game. The Eagles benefitted from playing inside the paint throughout the game.

“Tavares (Adams) stepped up big,” Carroll said. “He has been playing like that over the last few months. He has started to grow into his size a little bit. He is mature and a leader.”

Adams finished the game with 16 points, 8 of which came before Highland Home got on the board in the first.

The Eagles held Highland Home to just 5 first quarter points and went into the second holding a 19-5 lead. The lead mushroomed to 24 at halftime thanks to strong defense by the Eagles.

“We felt like we could be fairly quick on the perimeter,” Carroll said. “We feel like we were long enough to get into the passing lanes. We play disciplined defense. When we put our arms down, they were able to score on us. When we played good defense, we were able to get turnovers.”

Those turnover led to fast break points for the Eagles.

“We teach our point guards whenever they get the ball and they have numbers to always attack,” Carroll said.

The Eagles were able to play much of the second half with their reserve players. They were able to take a comfortable 54-21 lead into the fourth quarter before pulling out the 34-point win.

Zack Alford finished second on the team with 16 points.

The Eagles will be back in action this evening when they play their second consecutive home game. This time they will put their early endurance to the test when they take on rival Pike County.

“We expect it to be a good ball game,” Carroll said. “I have called around a little bit on Pike County. I know they have been in a lot of close ball games against some really good teams. They have won the last few times we played, so they are going to come in with confidence. It’s going to be a big game for us.”