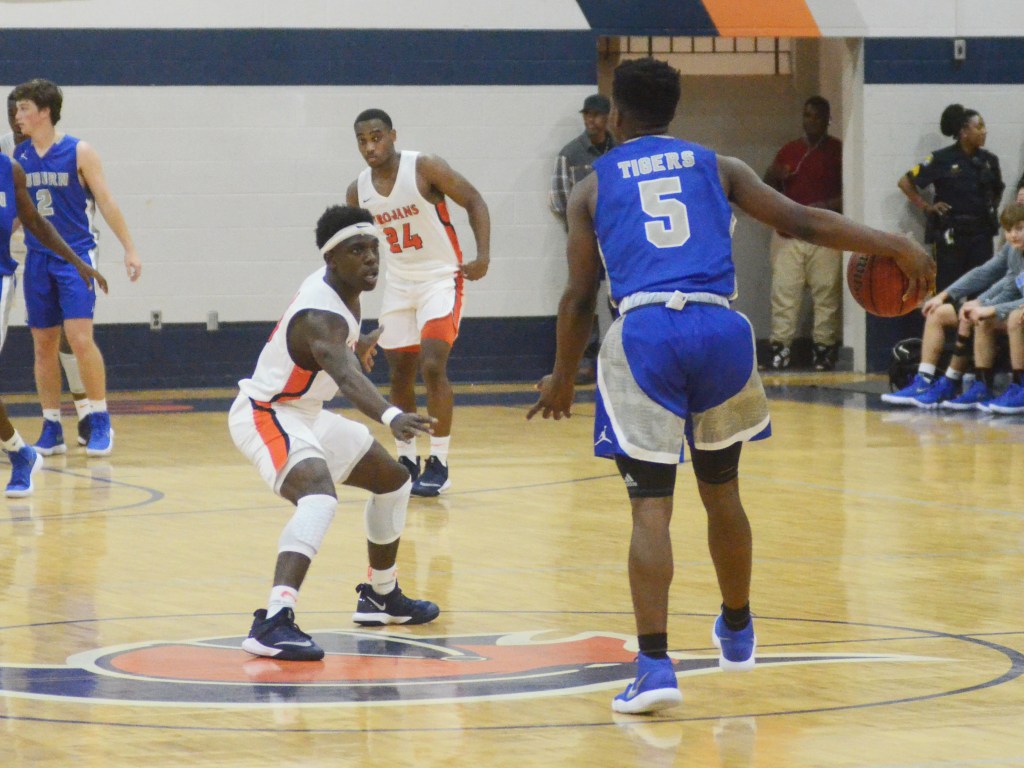 Messenger Photo/Mike Hensley Despite a 1-2, start Charles Henderson head coach Shelby Tuck is confident his Trojans will have a successful season.

The Charles Henderson Trojans have gotten off to a 1-2 start this season. With several games remaining this month, head coach Shelby Tuck believes his team will find it’s footing by the start of the new year.

The Trojans fell in the season opener to 6A Dothan before falling to 7A Auburn last Friday night. With weary legs, the Trojans finally picked up their first win over rival Pike County.

“I am extremely proud of the effort the guys are showing,” said head coach Shelby Tuck. “They are playing with a lot of heart and intensity.”

Despite the effort, the Trojans are making their fair share of mental mistakes according to Tuck and that is something they have addressed this week.

“It goes back to the mental mistakes that we are making, turning the ball over and missing free throws,” Tuck said. “We have cleaned that up this week. We had Tuesday off not knowing that we were going to have today (Friday) off. We had three days to dress up from last week.”

The Trojans overcame a 15-point deficit on their way to the win against Pike County Saturday. They hope that will be a spark as they move through a busy month of December.

“I think that gave us momentum going into practice for the week,” Tuck said. “I am proud of the guys for what they are doing and the rest of the season looks really bright for us.”

The Trojans have had to replace big man and St. Johns commit Josh Roberts, who left Charles Henderson and now attends Montverde Academy in Florida. Roberts, a 6’9’’ forward, was the go-to man inside the paint for the Trojans over the last few seasons.

“Josh was a big impact for us,” Tuck said. “He protected the rim for us. Last year, we depended on Josh. We had a guy that was going to rebound and block shots. It kind of covered up our defensive miscues.”

One player that is trying to fill the void is big man Kelshun Campbell.

“He is a good kid,” Tuck said. “I love Kelshun to death. I have been working with him since rec ball. We have a good relationship. He is one of those kids who you can’t help but to love. He will run through a wall for you. I have 14 kids that will do the same thing, but Kelshun is just one of those high-energy guys that give you everything he’s got.”

“It’s going to be challenging for us,” Tuck said. “We are going to be playing teams from Tennessee and Georgia. It gives us a chance to play some different competition. It’s a great experience for them to just get away.”