Eagles hit the court: Goshen shifts attention to basketball with the season set to begin on Monday night 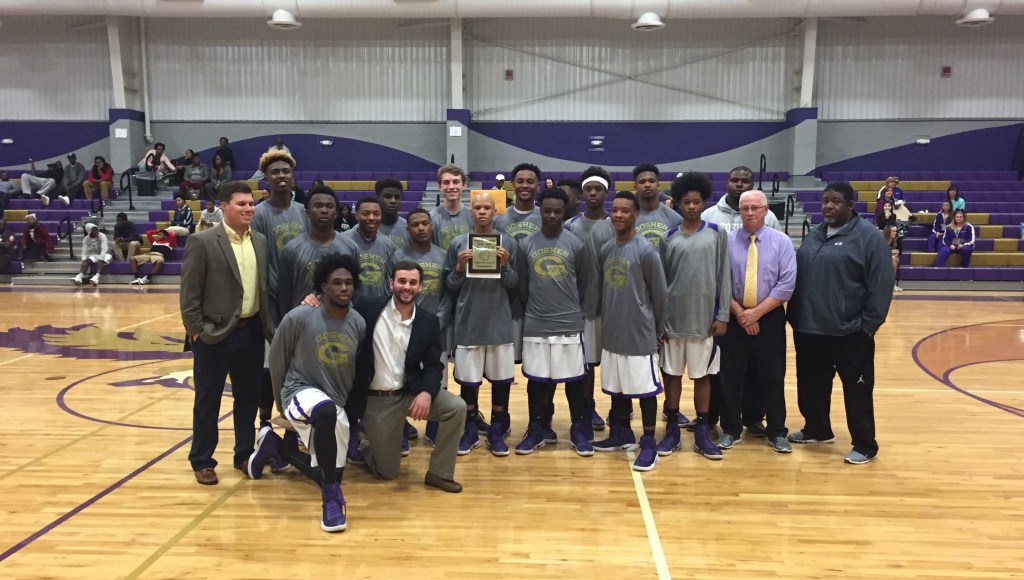 Photo/Mike Hensley The Goshen Eagles pose with their area championship trophy last season after winning the tournament. The Eagles will begin the 2017-2018 season at home on Monday against Highland Home.

Football season has come to a close on the campus of Goshen High School. Now the attention shifts to the hardwood and the start of the 2017-2018 basketball season.

Ethan Carroll begins his third year at the helm and even though his team is off to a late start, he believes they will be ready for their season opener on Monday night.

“We did a little shoot-around on Monday to get them ready,” Carroll said. “Yesterday (Tuesday) was our first official practice.”

Most of the Eagles roster also plays football and due to the Eagles’ success in the playoffs, they have started much later than most teams. Carroll believes that with his veteran-heavy lineup, it shouldn’t take long to get his team up to speed.

“We are a little behind the eight-ball as far as preparation,” Carroll said. “Fortunately, in this type of situation, we have everybody that played last year coming back. As far as play installation, it’s more of a refresher than a learning point.”

Perhaps the biggest hurdle the Eagles will have to get over is not being in “basketball shape”.

The Eagles finished last season with an undefeated record in area play and finished as area champions before losing to R.C. Hatch in the Class 2A Regionals.

This season, the Eagles welcome back their roster from last season with the addition of a few new faces.

“A couple of our bigs have really progressed well over the summer,” Carroll said. “Of course our guards are playing well. Eric Williams, we expect him to keep stepping up. (JaQuez) Martin is a sophomore that moved up to varsity this year. We think he has potential to be really good. I think we are going to be deeper (front court) than we were last year with Devin Bell, Caleb Dawson and his brother Dante moved up to varsity this year. All of those are going to give us a little more depth that we need.

“We are excited and energetic. We feel like we have some unfinished business.”

Another senior player to keep an eye on will be Michael Hollis, who was a leader for the Eagles last season.

“He plays year round,” Carroll said. “He doesn’t play football and it’s good to know you have kids that don’t just sit on the couch during the offseason. You can tell he has worked really hard. We have to get him in the weight room. Get him a little more muscle on his body to be able to get inside the paint. He is a special kid.”

With the strong run in the football state playoffs, Carroll believes many of his players will enter the season with confidence.

“I have been fortunate to call on and get some advice from some older coaches who has been in these types of scenarios,” Carroll said. “One of the coaches said the success you had in football will help in basketball because the kids understand they can do it and they know what it takes. The biggest thing is buying in to a championship type culture.”

In area play, the Eagles will join Luverne, Calhoun and Central Hayneville.

“I think it’s going to be even more competitive than it was last year,” Carroll said. “Luverne was young last year. They pretty much have the majority of their points back. They are going to be physical and fast. Calhoun I think is better than they were last year. Central-Hayneville is going to be extremely long and athletic.”

The Eagles will officially begin their season at home on Monday against Highland Home before hosting rival Pike County on Tuesday.