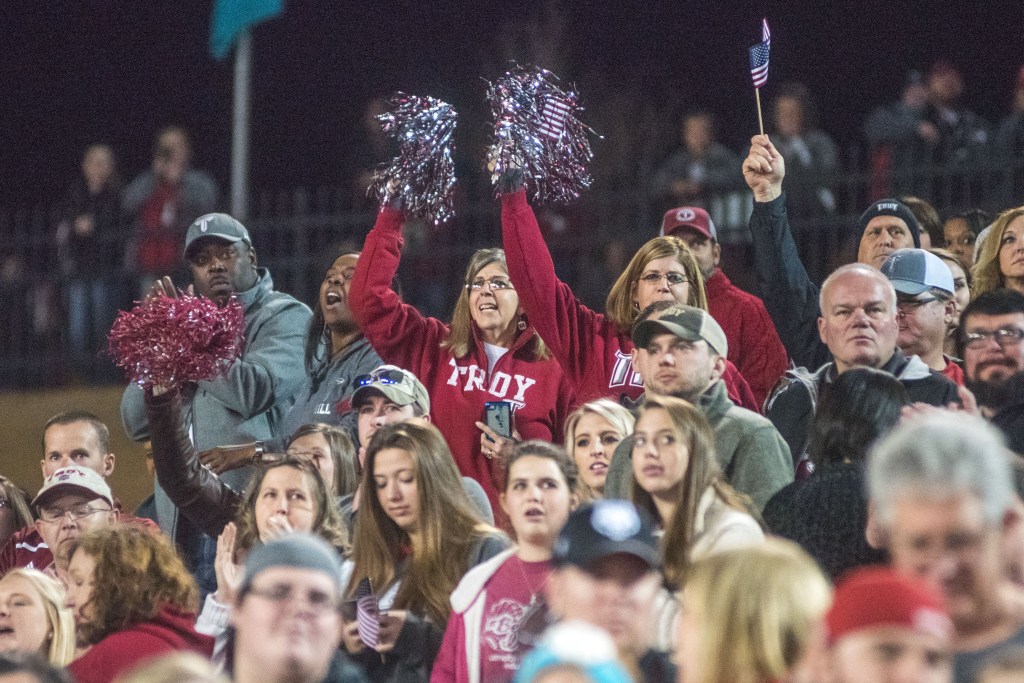 Messenger Photo/Jonah Enfinger Troy fans cheer on the Trojans during a game on Saturday against Arkansas State. The Trojans will take on North Texas in the New Orleans Bowl on December 16.

Saturday’s game between the Troy Trojans and Arkansas State Red Wolves proved to be a rollercoaster ride for even the most comfortable fans.

The lead changed hands twice in the game’s final 90 seconds; meanwhile, the Trojan faithful were left wondering if they were destined to come up short of a conference title for the second consecutive season.

In the end, Silvers connected with Deondre Douglas in the back of the end zone to give the Trojans a piece of the conference crown for the first time since 2010.

The fans were beyond excited. The Sound of the South Pep Band, who played more often and at times were louder than Arkansas State’s “South of the Natural Sate” band, moved to the lower level to play and celebrate with the players and the fans.

The fact that the fans showed up to Jonesboro should not come as a surprise. The fans have flocked to see the Trojans play all season. At home, the average attendance has been 24,441 compared to 22,533 last season. Due to scheduling the fans have had to manage three mid-week games this season including one on Black Friday. The fans also showed up despite a driving rainstorm in frigid conditions on homecoming against Georgia Southern.

The fans have even traveled well this season. Hotels throughout Jonesboro were full last Saturday. They have traveled to Boise, Idaho; Baton Rouge, Louisiana; Las Cruces, New Mexico; and Conway, South Carolina to see a glimpse of the Trojans.

Credit should largely go to head coach Neal Brown and the success of the Trojans, but it’s more than that. Along with Brown, Athletic Director Jeremy McClain and his staff have made game day at Veterans Memorial Stadium a destination. Game day at Veterans Memorial Stadium used to be a fun event on a Saturday afternoon. With the help of more game day promotions and in-game activities, it has become something that people look forward too.

Success on the field tends to lead to excitement in the stands. In the last two years, fans have had the opportunity to witness Neal Brown turn a 4-8 football team in his first year in 2015 to a 21-5 team over the last 26 games. The Trojans have been on the national stage on a handful occasions over the last two seasons. Clemson, the eventual national champions, only narrowly defeated Troy last season before being the first Sun Belt Conference team to be ranked in the AP Top-25 Poll. That team won their first bowl game since 2010 to finish off the year against Ohio.

The excitement continued this year when they defeated nationally ranked LSU in Baton Rouge and recently when they knocked off the defending champion Red Wolves on Saturday.

The national attention has continued to grow as well. With all the success, Troy was featured on Sportcenter for both their performance against LSU and for their new uniform combinations.

The Trojans will be in the national spotlight one final time this season when they officially kick of the 2017-2018-bowl season in the R&L Carriers New Orleans Bowl on December 16 against North Texas.

The Trojans at one time were regular participants in the Crescent City after going to three New Orleans Bowls in a four-year span. With the Trojans making the trip to New Orleans for the first time since 2010, the expectation should be that the Mercedes-Benz Superdome will be full of fans dawning the Cardinal and White.