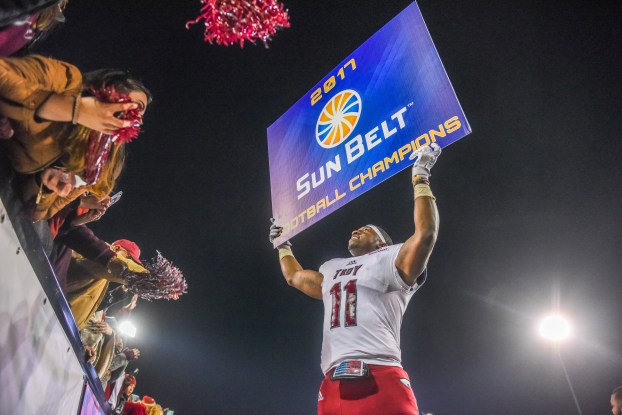 Tevaris McCormick celebrates with the fans after the Trojans defeated Arkansas State 32-25 to claim a share of the conference title on Saturday evening in Jonesboro. Inset: The Troy seniors pose for a post game photo.

“Finish” – that is the message that Troy head coach Neal Brown has expressed to his players since the summer. On Saturday, the message was heard loud and clear when the Trojans knocked off Arkansas State 32-25 to claim a share of the Sun Belt Conference Championship.

Last season, the conference championship was in Troy’s grasp before they fell in two out of their final three games, including a 28-24 loss in the final to Georgia Southern to miss out on a championship.

The Trojans led by 11 with 7:34 remaining in the game Saturday. Just over six minutes later, the Red Wolves claimed a one-point lead with 1:06 remaining. With no timeouts left to stop the clock, quarterback Brandon Silvers led the Trojans on a game-winning drive culminating in a 14-yard touchdown pass to Deondre Douglas.

“We finished,” Brown said. “I thought this game was almost the tale of our season. Every victory except for a couple was up and down and hasn’t always been pretty. The characteristic of this team that I really like is they have grit. They find ways to get it done.”

The Trojans faced a similar situation a season ago in the finale against the Eagles. Trailing by four points with 6:20 remaining in the game, the Trojans embarked on the drive that went all the way to the Eagle 11. That was as close as they would get after a fourth down attempt came up short.

“That whole drive was like last year,” Silvers said. “We wanted to go down there and score. We didn’t do that last year. I am glad we got it done this year.”

Last season’s drive was fresh in the mind of Troy’s senior quarterback as he led his team onto the field one final time to close out the regular season.

“There was a little bit of déjà vu when the drive started,” Silvers said. “We didn’t want that same stuff to happen again. We made some critical plays. Deondre caught the pass on fourth and five and ended up with the corner ball in the end zone.”

The Trojans will have another opportunity to finish on a high note when they travel to New Orleans to take part in the R&L Carriers New Orleans Bowl on December 16 against North Texas.

“We are playing against a very good North Texas team, who are Conference USA Western Division Champions, and the only team they lost to in the conference was FAU, who arguably has one of the top offenses in the country,” Brown said during Sunday’s press conference. “They are an old Sun Belt rival. When you talk about the history of the Sun Belt, you had North Texas, when the conference first started, and they were the powerhouse. They won several conference championships in a row.”

Kickoff of the New Orleans Bowl is scheduled for noon at the Mercedes-Benz Superdome.

What’s Happening this Week: The first week of December

Hey everyone! Welcome to a new week, grab a cup of coffee and get ready because the holiday festivities are... read more