Heading west: Trojans hit the road to take on Arkansas State with the Sun Belt Conference title on the line 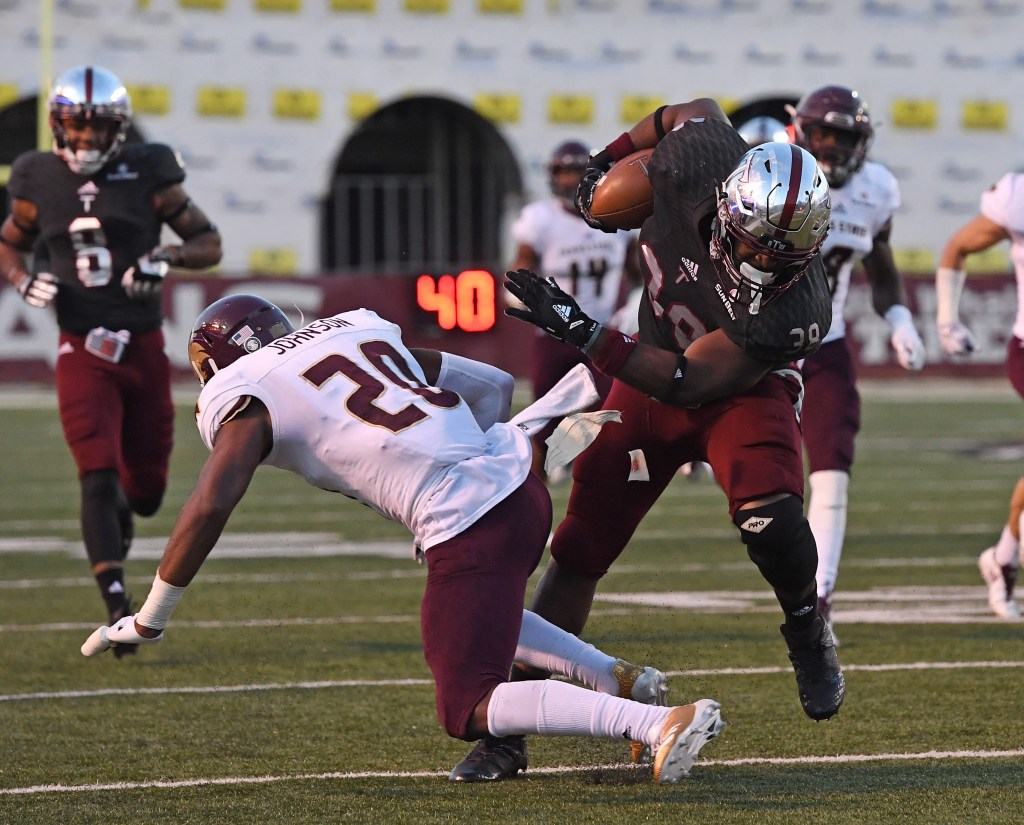 Troy running back Jordan Chunn (38) shakes off Texas State safety Stephan Johnson (20) while running for a 43-yard touchdown during the first half of an NCAA college football game in Troy, Ala., Friday, Nov. 24, 2017. (Photo/Thomas Graning)

The Troy Trojans have another tall task in front of them on Saturday evening when they take on the Arkansas State Red Wolves for the Sun Belt Conference championship.

Since losing their first and only conference game to South Alabama, the Trojans have worked their way back into the mix and with one game remaining sit in a tie for first with a conference record of 6-1. They are currently tied with Appalachian State and Arkansas State.

“Our team has handled our business since the South game,” said head coach Neal Brown. “What more could you ask for in college football? A 6:30, ESPN2 kick and the winner gets a share of the conference championship.”

The Trojans will try to dethrone a Red Wolves team that has won at least a share of the Sun Belt crown in five of the last six years.

“Arkansas State has been at the top, really since we relinquished that role there,” Brown said. “Since the 2010 season, they have been in the discussion for conference championships since then. We have a lot of respect for that program and what Blake [Anderson] has done there.”

The Trojan offense comes into the game on Saturday on a bit of a hot streak after putting up 62 points last Friday against Texas State. The 62 points is the most points scored in Troy’s FBS history.

Silvers was at the forefront of the team’s success on Friday when he completed 22 of his 30 passes for 380 yards and four touchdowns.

“Brandon [Silvers] is playing well,” Brown said. “I think people get caught up in those touchdown passes, which is really not an indicator of someone playing real well at the quarterback spot. We’re definitely sharper than we were, but there is still room for improvement.”

The Trojans will try and return the favor to Arkansas State on Saturday. The Red Wolves knocked off the Trojans a year ago 35-3 in front of a national audience.

“The only two things that we’ll bring up are: they were more physical than us and more disciplined,” Brown said. “That’s really the only time I can say that happened within a two-year period. Those things will be brought up; they know what it is. We got it handed to us.”

The Red Wolves like the Trojans come into the game riding a hot streak offensively. This season they are averaging nearly 40 points per game. Last week they scored 67 points in a 67-50 win over ULM.

“They have one of the top offenses in the country,” Brown said. “I think they’re in the top 15 in most statistical categories. Their quarterback, [Justice Hansen], is playing at a high level. He has a lot of touchdown passes and a lot of passing yards. They have speed and depth at wide receiver. They threaten you vertically, more so than anybody that we’ve played this year.”

The Trojan offensive line will be tasked with controlling the defending Sun Belt Player of the Year in Ja’Von Rolland-Jones.

Rolland-Jones sits fourth on the team in tackles with 48, but leads the team in sacks with 12.

“He has an opportunity to set the NCAA sacks record; I hope that doesn’t happen against us. I hope he sets that in the bowl game.”

The Red Wolves defense is holding offenses to 24 points per game and 241 yards through the air.

“Their cornerbacks can cover,” Brown said. “We had a hard time of breaking free from their man coverage. They put pressure on the quarterback and they stop the run. That’s a pretty good recipe for success.”

Troy fans will keep an alert eye on the progress of the Appalachian State game throughout the day. A loss by the Mountaineers to the Louisiana coupled with a Trojan win would give Troy the outright championship.

“It’s one of those things that you don’t even have to talk about. They know,” Brown said. “We know what’s at stake.”