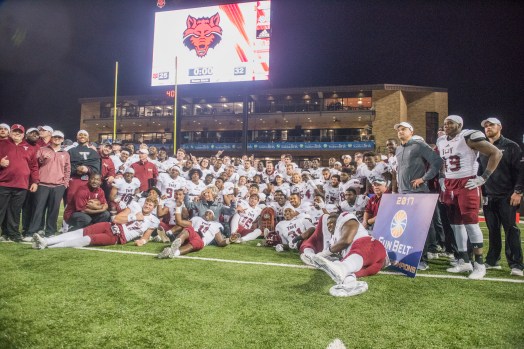 Photo/Jonah Enfinger Troy poses with the trophy following their 32-25 win over Arkansas State on Saturday. 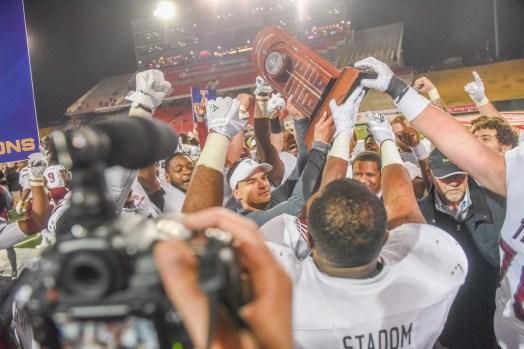 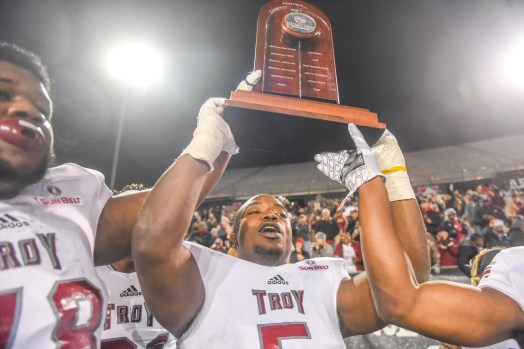 Senior quarterback Brandon Silvers connected with Deondre Douglas in the back corner of the end zone with 17 seconds remaining to give Troy a 32-25 win over Arkansas State to claim a share of the Sun Belt title on Saturday night.

“What a college football game,” said head coach Neal Brown. “I thought our kids were really resilient. We had a bunch of guys beat up. They are celebrating deservedly so. I can’t say enough about how our football team battled.”

The Trojans led by 11 with 7:46 remaining in the game before the Red Wolves staged a comeback and retook the lead with 1:06 left. All season long Brown has expressed the importance of finishing. Brown saw his words put into action on Friday night.

“We finished,” Brown said. “I thought this game was almost the tale of our season. Every victory except for a couple was up and down and hasn’t always been pretty. The characteristic of this team that I really like is they have grit. They find ways to get it done.”

Both defenses held each other off the scoreboard in the opening quarter despite the Red Wolves getting inside the red zone twice. The Trojan defense held on a fourth and one attempt and Blace Brown picked off a Justice Hansen pass in the end zone to preserve the 0-0 start.

The Red Wolves broke the seal in the second quarter when kicker Sawyer Williams connected on a 26-yard field goal to put Arkansas State up 3-0 with 13:36 remaining in the opening half.

The Trojans answered with a history-making play when freshman Marcus Jones ran back a kickoff 99 yards for this record-breaking third kickoff return for a touchdown this season to put the Trojans up 7-3.

Hansen responded with 5:53 remaining in the half when he ran the ball in from 5-yards out to give the Red Wolves a 10-7 lead.

The Red Wolves came out in the second half with an up-tempo offense. They took the opening drive into Trojan territory, but the drive ended with a missed 46-yard field goal by Williams to keep the score at 10-7.

The Trojans responded on their next drive when they took the ball into Red Wolves territory thanks to completions by Deondre Douglas, Josh Anderson and Tevaris McCormick. Tyler Sumpter finished off the drive with a 37-yard field goal to tie the game at 10 with 9:59 remaining in the third quarter.

The Red Wolves responded with a 13-play drive culminating with a 28-yard field goal to give Arkansas State a 13-10 lead with 5:07 remaining in the third.

On third and two on the Arkansas State 44, Silvers connected on a touchdown pass to Tray Eafford to give Troy a 17-13 lead with 3:32 remaining in the third quarter. All three of Eafford’s touchdowns this season have been over 40 yards.

Sumpter failed on the opportunity to extend Troy’s lead when missed a 38-yard field goal.

The field goal competition continued with the Red Wolves next drive. Williams missed his second of the game from 38 yards out.

On the second play of their drive, Troy’s Anderson fumbled the ball giving the ball right back to the Red Wolves.

Jones came up big later in the drive when he picked off a Hansen pass in the end zone and returned it 100 yards for his second touchdown of the game to extend Troy’s lead to 11 at 24-13 with 7:46 remaining in the game.

“We knew what kind of player we were getting,” Brown said. “Did I know he was going to be this big of factor early? I didn’t, but I knew he was going to be a really good player. If he doesn’t win player of the week in the conference they need to give that thing back.”

The Red Wolves also showed some grit when they marched down the field in 10 plays and scored when Hansen connected with Omar Bayless for an 11-yard touchdown pass to cut the Trojans lead to 5 at 29-24 after a failed two point conversion.

After a Trojan three-and-out the Red Wolves got the ball back with 2:34 remaining. Hansen hit Christian Booker for a touchdown to stun the Trojan faithful by taking a 25-24 lead after they once again missed the two-point conversion.

With 1:23 remaining and no timeouts, Silvers led the Trojans offense on to the field. With time dwindling down the Trojans faced a fourth and five near midfield. Silvers connected with Douglas to keep the drive and game alive.

Two plays later Silvers connected with Douglas to send the Trojan bench into a frenzy with 17 seconds remaining.

“I looked at the defense and they called a corner route,” Douglas said. “I saw that the safety was inside the hash and I knew it was a touchdown from there.”

“We made some critical plays,” Silver said. “Deondre caught that ball on fourth and five and ended up with the corner ball in the end zone. We all came together.”

The Red wolves made it all the way to the Trojan 38 before time officially expired.

The Trojans will learn their bowl fate Sunday afternoon.