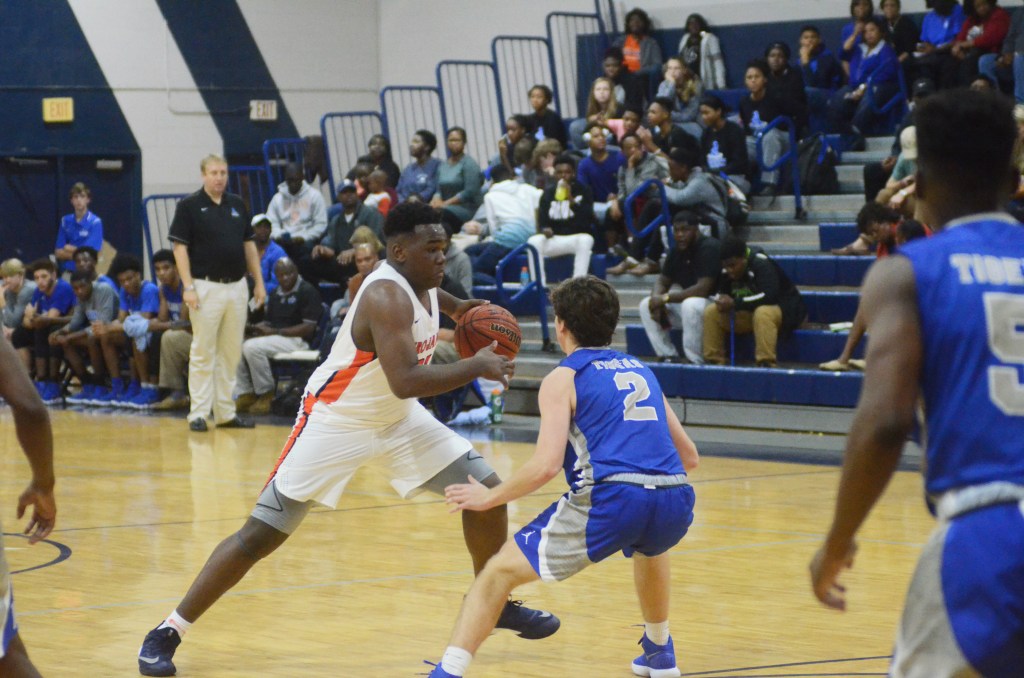 Charles Henderson guard Jalin Tuck nailed a three pointer with time expiring. Unfortunately for the Trojans it was one point short of tying Auburn in a 58-57 loss on Friday night.

The loss drops the Trojans to 0-2 after they dropped the season opener to Dothan earlier in the week.

“I am proud of them,” said head coach Shelby Tuck. “It was just our second game and we came out of the box against two tough opponents. We knew these guys were going to be tough; they (Charles Henderson) played hard. We had a few defensive laps but I am pleased with the overall effort. We are going to get better and grind.”

Tuck and Braxton McGhee carried the Trojans in the first quarter by posting 11 of Charles Henderson’s 13 points. The Trojans entered the second quarter winning 13-10.

The Tigers got the better of the Trojans in the second quarter by outscoring Charles Henderson 22-16 and took a 32-29 lead into halftime.

It took the Trojans nearly four minutes to score their first points in the third quarter. During that time the Tigers built a lead as high as 13 points at 42-29 before going into the fourth holding a 46-39 lead.

The Trojans mounted a strong comeback in the final frame. They began the quarter on a 9-1 run and took a one-point lead at 48-47 with 5:30 remaining.

The Tigers were able to immediately retake the lead and despite a late Trojan charge, were able to hold on for the win.

“Those guys have fight in them,” Tuck said. “I have all the confidence in the world in them. They are going to fight hard. I just have to do a better job at coaching.”

Tuck finished the game with a team-high 25 points. Laertis Brantley had 13 points while Kelshun Campbell had 10.

The Lady Trojans improved to 6-0 on the season when they took out the Tigers 52-26.

“They did a good job,” said head coach Dyneshia Jones. “It’s so much better now that we have girls healthy. We rotated the ball around. Rotation is the key to getting everybody open.”

Tatyana Siler led the Trojans with 17 points, while Niaira Jones had 14. Maori Davenport had 8.

The Trojans will be back in action this afternoon when they go up against their heated rivals in Pike County beginning at 5:30 with the junior varsity game.