Eagles focused on the next challenge 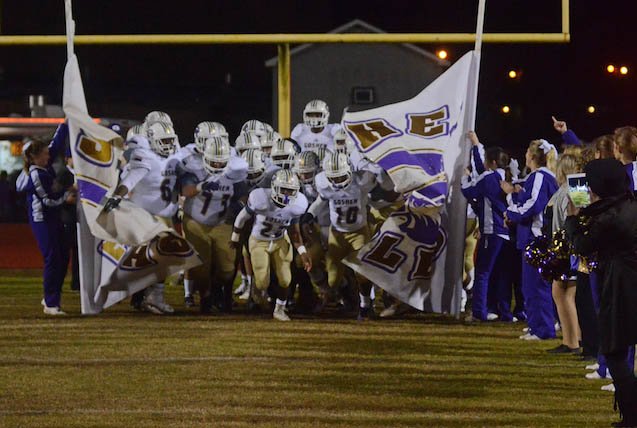 Messenger Photo/Mike Hensley Damion Passmore (22) leads the Eagles onto the field during their last game against St. Lukes on Friday night. Goshen won the quarterfinal matchup 56-52.

The stage is set for Goshen’s first ever trip to the Class 2A state semifinals this evening. The Eagles will host Leroy for the right to play in Tuscaloosa in next week’s state championship.

The Eagles faithful is still coming off the excitement of last week’s thrilling win over St. Luke’s. Even though emotions are high, the Eagles are treating it like any other week.

“I think it’s been a good week of practice and the guy’s have put in a lot of hard work,” said head coach Bart Snyder. “They paid a lot of attention on raising the bar. We are getting ready to walk on the field and play. They are very excited about this, but they are being themselves.”

The Eagles got the win last week, but it was far from perfect. They allowed the Wildcats to rush for a total of 583 yards including a 459-yard performance by quarterback Jermaine Brown.

This week the Eagles will be tasked with stopping Leroy freshman running back Kelston Flakes who rushed for 279 yards on 32 attempts and had a total of three touchdowns in last week’s win over Luverne.

“He is a very good runner,” Snyder said. “He has great vision and he is able to make adjustments to get somewhere. The biggest thing is he has a very good offensive line. He has a good quarterback and receivers to go along with him.”

Flakes is a different style of runner than Brown according to Snyder. With that said Snyder believes it all comes down to execution.

“It’s a different style,” Snyder said. “We are going to make sure we play our assignments a lot better than what we did last week. We did miss a lot of assignments. If we would have been in the gaps I feel like some of those runs wouldn’t have been made.”

Flakes is not the only weapon the Eagles will have to keep an eye on. Quarterback Nathan Taylor has weapons on the field including receiver Dawson McDaniels.

“You can’t be focused just on him (Flakes),” Snyder said. “Their coach (Jason Massey) does a great job at taking people in and out of the game making sure everyone is fresh in the fourth quarter.”

The Bears have knocked off familiar foes on their way to the semi-finals. In week one they took out Elba and followed it up with wins over Ariton and Luverne.

“It’s a good thing because it keeps our guys focused,” Snyder said. “It lets them know that hey these are the teams they played and you beat them the same as they did minus Elba. Our guys are more focused on the fact that this team is a great quality ball team. They know that they are in the fourth round and very good so we have to raise the bar.”

As for the Bears, Coach Massey is expecting a tough Eagles team this evening.

“We are excited anytime you play this time of the year it’s something to get excited about,” Massey said. “They (Goshen) are a really good football team. Talking to coaches that we have played they all talked about how talented they are and how explosive they are on offense. We are looking forward to driving over to the Wiregrass area.”

Kickoff is scheduled for 7 p.m. at Eagles Stadium.