Carroll and the Eagle offense clicking on all cylinders 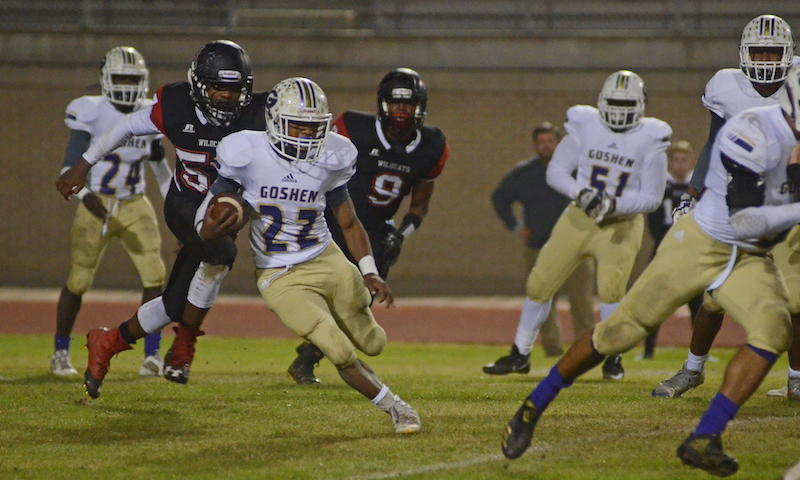 Messenger Photo/Mike Hensley Goshen running back Damion Passmore runs the ball for the Eagles during their game against St. Lukes on Friday night in Theodore.

Goshen offensive coordinator Ethan Carroll is in his third year as the leader of the Eagles offense and he has quickly turned them into one of the region’s top units.

When the clock hit triple zeroes Friday night in Goshen’s win over St. Lukes, Carroll raced to the Eagle fans who made the three-hour trip south to Theordore to celebrate the program’s first appearance in the state semifinals.

“During a game, you really don’t feel those emotions until the end,” Carroll said. “Our fans stayed and I wanted to thank them for that. It was fun and exciting.”

Carroll comes from a small town, so moving to Goshen was a smooth transition for the two-sport coach.

“I love it,” Carroll said. “I come from a small town so being able to come to a community like this where they accept you immediately (is nice). The Snyders, the Warricks and coach Lane all immediately brought me in and groomed me to let me grow up because I was so young when I got here to take the head basketball job. They helped with that transition phase. The community is wonderful.”

The Eagles came into this season with a lot of optimism, thanks in large part to their senior-laden roster. Under Carroll, scoring hasn’t been a problem for the Eagles this year. They averaged 35 points in the regular season and that number has only gone up during the postseason. Through the first three games the Eagles are averaging 41 points per game including 52 in the win last week.

Over the last two years under Carroll, the Eagles have found most of their success on the ground. This year, however, the passing game has turned a leaf behind senior quarterback Brock Snyder. In the last three playoff games, the Eagles have averaged 286 passing a yards per game and have totaled 12 touchdowns through the air.

“I honestly believe we have had it all the time,” Carroll said. “The players have done a really good job of getting better as the season has gone along. We have been fortunate enough not to have the injury bug.”

For the seniors, it’s their third year in the system.

“You have kids that over time you can do so much more with,” Carroll said. “It makes my job easy. It’s them doing it. We have had wonderful players make wonderful plays.”

A perfect example of that occurred in the final two minutes of the game on Friday night when senior quarterback Brock Snyder connected with senior Zack Alford for the game-winning touchdown.

“That was a play that we haven’t ever run,” Carroll said. “When you have kids like Brock and Zack, you can call whatever you want to call. It doesn’t matter if they ran it in practice or not. They are able to pick up on it quickly.”

The offense will be put to the test again this Friday night when they host a Leroy team that hasn’t allowed more than 21 points since October 13.

Kickoff is scheduled for 7 p.m.X