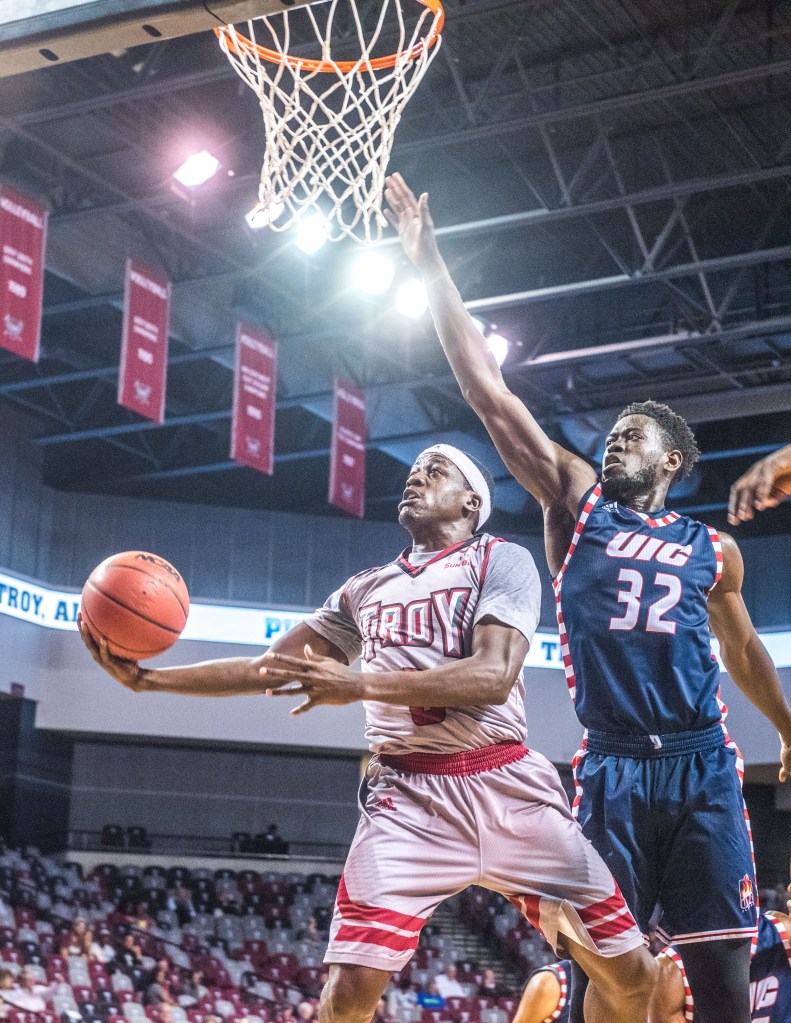 Messenger Photo/Jonah Enfinger Kevin Baker goes up for a layup for Troy.

Wesley Person and the Troy Trojans picked up a comfortable 87-66 win over the Illinois-Chicago Flames on Wednesday night in the finale of the Adolph Rupp Classic.

The win gives the Trojans an overall record of 5-3 and they finished the classic 3-1.

“That was a game that caught me by surprise,” said Troy head coach Phil Cunningham. “This UIC game was one we were really concerned about with their athleticism and their depth. I am proud of the guys they came out ready to play. It was a real solid win against a team that I think when the season is over will have a lot of wins under their belt.”

Person finished the game with a team-high 27 points. He converted on 7 of his 15 shots including 5 of 10 from behind the arc.

“It felt good,” Person said. “I came out early and put one up and missed it, but I finally hit one. Coach ran a play for me and I hit another. Once I got going I couldn’t miss.”

The Trojans held the Flames to 32 percent shooting in the opening half and held the Flames without a field goal for nearly five minutes in the first half building a lead as high as 19 before heading to the half with a 39-20 lead.

Person nearly outscored the Flames in the first half by scoring 18 points on 5-11 shooting.

The Trojans led by as many as 29 points in the second half giving Cunningham the opportunity to empty his bench for the majority of the half. The Flames were able to get back to within as few as 15 points with under two minutes to go before the Trojans finished with the 21-point win.

Along with Person, the Trojans had two others finish in double figures. B.J. Miller finished with 12 points while Juan Davis had 11.

Wednesday marked the fourth time this year that the Trojans finished with at least 80 points.

The Trojans will be back in action on Tuesday when they host in-state rival UAB beginning on Tuesday.