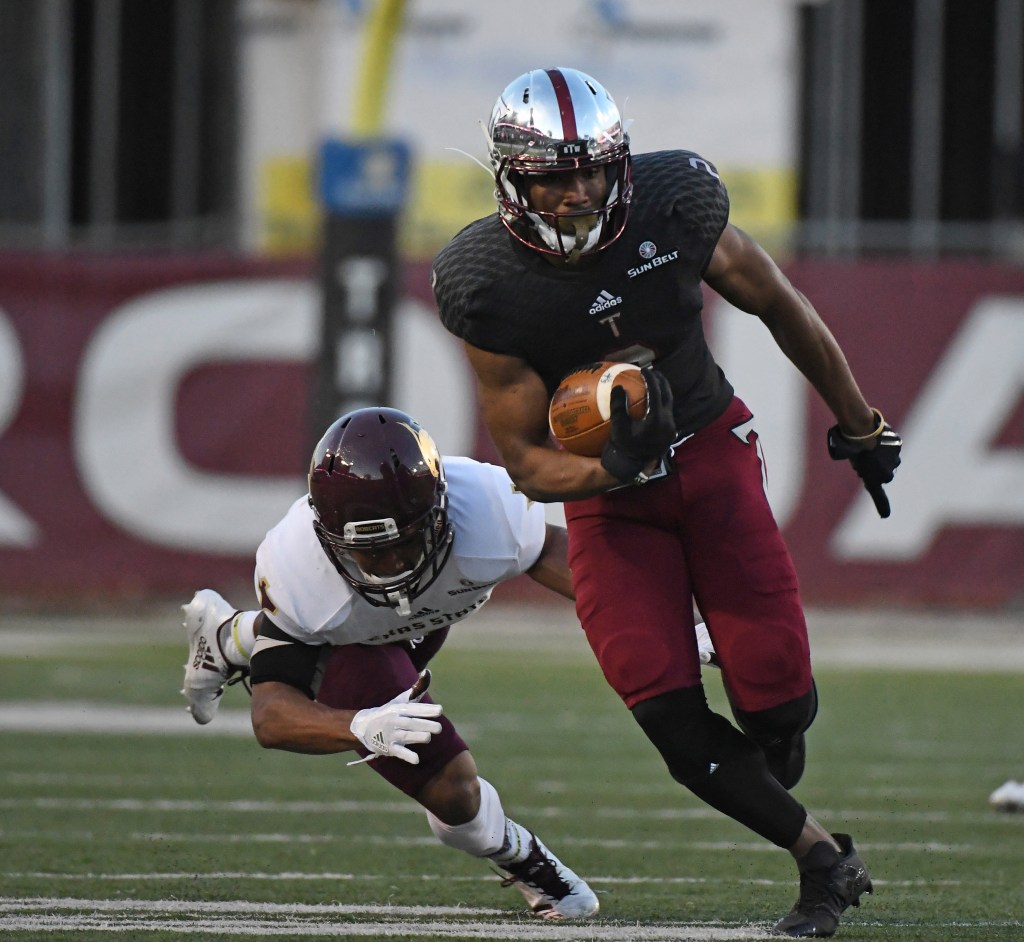 Troy wide receiver John Johnson (2) runs with the ball past Texas State cornerback JaShon Waddy (16) during the first half of an NCAA college football game in Troy, Ala., Friday, Nov. 24, 2017. (Photo/Thomas Graning)

After a slow start to the season, the Troy receivers are starting to once again play up to their potential when it matters most.

The Trojans will have their biggest game of the season on Saturday night against Arkansas State with the Sun Belt Conference title on the line.

The Trojans will be going against the Red Wolves with the nation’s 34th best passing offense in the country with 268 yards per game.

The Trojans were averaging 250 yards per game as late as the South Alabama game. They were struggling to get open and make big plays. Beginning with their game against Georgia State on October 21 that began to change.

“As a staff, we made an effort to do that and I think it’s made a difference. If you throw 10 of them and you catch half of them, that’s really, really good on those deep balls.”

In their win against the Bobcats, the Trojans threw for 487 yards and had two touchdown passes for 43 yards and 59 yards.

“We’ve thrown the ball effectively,” said head coach Neal Brown. “We’re in the top 35 teams in the country in passing offense. We haven’t caught the ball as well as we would have liked early in the season. We made a lot of competitive catches in the last two games. I think we’re playing better.”

Depth has also played a factor in the passing game’s resurgence. The Trojans had 13 different receivers make a catch against the Bobcats. The Trojans’ leading receivers, Emmanuel Thompson and Deondre Douglas each had four catches.

“There are a lot of good receivers around,” said senior quarterback Brandon Silvers. “It’s hard to get the ball to Emmanuel like I did last year because he was our top receiver; now we have a few of them. It’s a good time for us to click the last few games. Hopefully we can carry that on.”

The Trojans will be challenged on Saturday when they go up against a Red Wolves defense that is allowing 241 passing yards per game.

“Defensively, they dominated us last year,” Brown said. “They have the best front four in our league. Ja’Von Rolland-Jones was the Player of the Year in the Sun Belt last year, and deservingly so. Their cornerbacks can cover. We had a hard time of breaking free from their man coverage. They put pressure on the quarterback and they stop the run. That’s a pretty good recipe for success.”