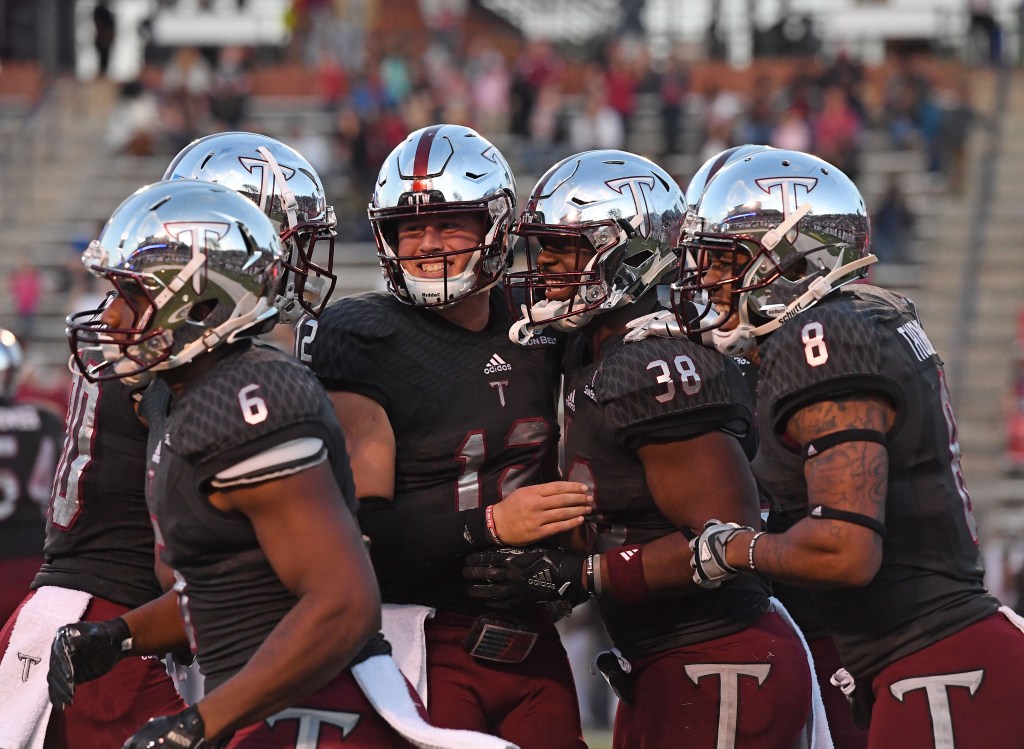 Troy quarterback Brandon Silvers (12) and running back Jordan Chunn (38) celebrate with teammates after Chunn's 43-yard touchdown run during the first half of an NCAA college football game in Troy, Ala., Friday, Nov. 24, 2017. (Photo/Thomas Graning)

The Troy Trojans find themselves in familiar territory this week as they prepare to hit the road to take on Arkansas State with the Sun Belt Conference championship on the line.

The Trojans defeated Texas State handily on Friday night 62-9 to improve their conference record to 6-1 and their overall record to 9-2.

“We had a big win Friday afternoon versus Texas State,” Troy head coach Neal Brown said Monday. “I’m really proud for our seniors, 21 seniors that we honored before the game, that they could enjoy a win in their home finale. It was a good win: we went 1-0 (this week). We are 6-1 in the Sun Belt and that sets up our game this week.”

The win kept the Trojans in a three-way tie on the top of the Sun Belt Conference standings along with Appalachian State and Arkansas State.

“Arkansas State has been at the top, really since we relinquished that role there,” Brown said. “Since the 2010 season, they have been in the discussion for conference championships since then. We have a lot of respect for that program and what Blake [Anderson] has done there.”

These same two teams met a season ago on senior night in front of a national audience. The Trojans were coming off a 28-24 win over Appalachian Sate. Afterwards, Troy became the first Sun Belt team to be ranked in the AP Top-25 Poll.

The Red Wolves brought the Trojans back down to earth just four days later with a 35-3 win. Troy finished the season with a loss to Georgia Southern and missed out on a chance to claim the conference crown.

“It’s been a fun year,” said quarterback Brandon Silvers. “Just as fun as last year. We are 9-2 going into our last game and it’s the championship. It’s against a team that whooped us on our senior night last year. It’s going to be a fun week. The energy level is going to be high. We have to take it one day at a time and hopefully get a ‘W’ on Saturday.”

Last year’s team focused on “Redemption Road”, this team however is taking it day by day.

“Last year’s team was really motivated by this ‘Redemption Road’ of earning back the respect from the losses in 2015,” Brown said. “This team is not. This team does better when we just focus on the task at hand. We really don’t even get caught up talking about the game. If we start talking about the game, we lose focus in the practices or meetings that we have.”

Last year the Trojans were banged up heading into the showdown against Arkansas State. This year coach Brown believes that it’s not the case.

“Our team has handled our business since the South game,” Brown said. “I think the difference between this year and last year is that we’re more rested, playing faster and getting better. We just played our most complete half of the year against Texas State.”

One player who is well rested and much healthier than a season ago is running back Jordan Chunn. The senior was hobbled late last season with a foot injury. This year he looks to run with a purpose.

“Around this point last year, I was beat up,” Chunn said. “I’m talking about I probably needed a crutch, a walker – everything. I was beat up, but I feel a lot better now than I did last year. Me, as in myself, and the team as a whole.”

This game is just another conference game for Chunn. Last year’s performance, however, will be fresh on his mind.

“It’s a conference game that we really don’t need to look toward as a conference championship. We need to play as in being 1-0 this week and finishing,” Chunn said. “Last year, we really didn’t finish the way we wanted to. This year, we’re thinking revenge and being able to do that.

The Trojans will take on Arkansas State again in front of a national audience this Saturday at 6:30 in Jonesboro, Arkansas.

“This team, the chemistry on and off the field has improved,” Brown said. “That’s a characteristic of a championship program, not just a team. We’re in year two of competing for a championship. Now, we have to get over that hump and win that championship.”