Rare opportunity: Excitement building for Goshen’s trip to the quarterfinals 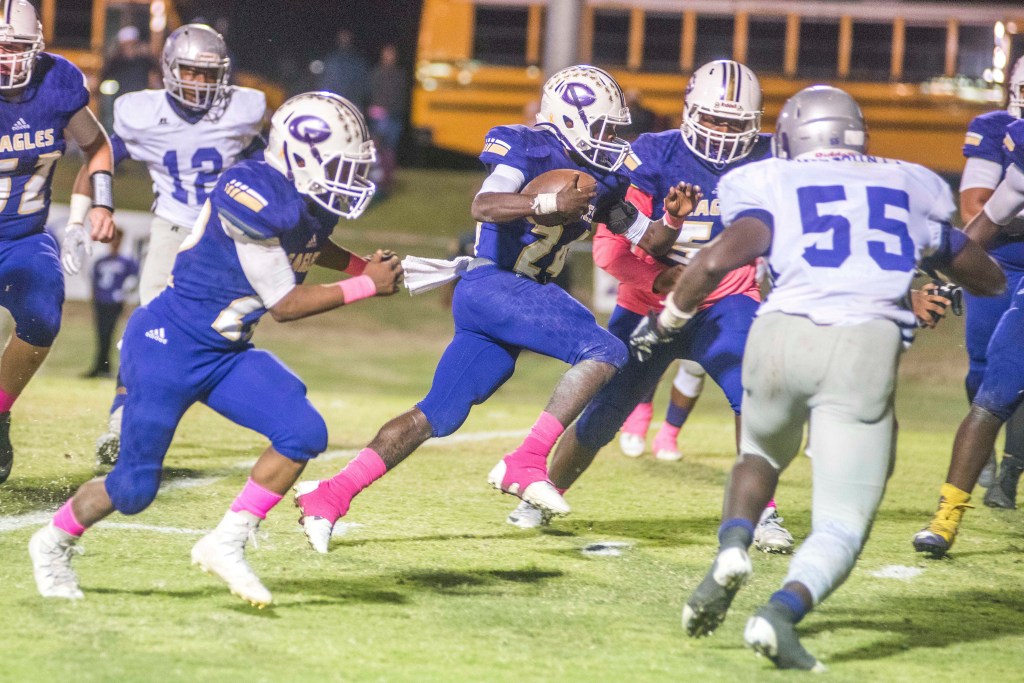 Zack Alford runs the ball for the Eagles during their win over Pike County earlier this season.

There was a lot of build up leading into the 2017 football season for Goshen. The Eagles returned much senior leadership and with their drive, they were confident they could play deep into November.

After claiming the Class 3A Region 3 championship, the Eagles have stormed their way through the first two rounds of the playoffs. On Friday night, they hope to continue their season with another win against St. Luke’s in Theodore.

“It’s exciting,” said head coach Bart Snyder. “Not just for the football team, but for us as coaches, players and the community. It’s something we have been working on for years. Our girl’s sports have done a great job and we are trying to stay on the same pace they are on. It’s very exciting.”

The fans of Goshen have been able to witness success in both the boys and girl’s basketball programs and the softball and volleyball teams that have advanced to the state tournament numerous times over the years.

The football team has not advanced this far since 1991.

“It is what they expect,” Snyder said. “That’s a great thing. We are trying to get the players and the fans to expect this. It makes the players play a little different and work a little harder. That is what they have done and it is why we are where we’re at.”

The Eagles are the only team from Pike County still alive in this year’s playoffs. Even though the game is over three hours away, Snyder and the rest of the Eagles hope that they will have the support of not only the Goshen fans, but of the rest of the fans from all over Pike County.

“It would be great,” Snyder said. “Of course we would love that. We hope we can get that kind of following.  Our fan base does a good job. That is a long distance to have to go, but we feel like they will make the travel and we would love to have extra come along with us to support these guys in uncharted grounds.”

The excitement from the fans has been growing over the last few weeks, but it started in the offseason when the belief began that they could hang around with the top tier teams from their region like Elba, New Brockton and Luverne. For the players, it started with the advice and example from former Goshen greats.

“It’s a lot of excitement,” Snyder said. “This group of players have been led by (former players) Marcus Jackson, Reginald Foster and Kendrez White. Many athletes before them have led them to say ‘Hey, we can do a little more’. They have guided those guys to where we are. These guys want a little more. They are hungry and the community is hungry.”

The Goshen fan bus is full and ready to head south for the showdown between the Eagles and the Wildcats. Kickoff is set for 7 p.m. from C.A. Douglas Field in Theodore.