Griffin and the Lady Eagles eager to begin a new year 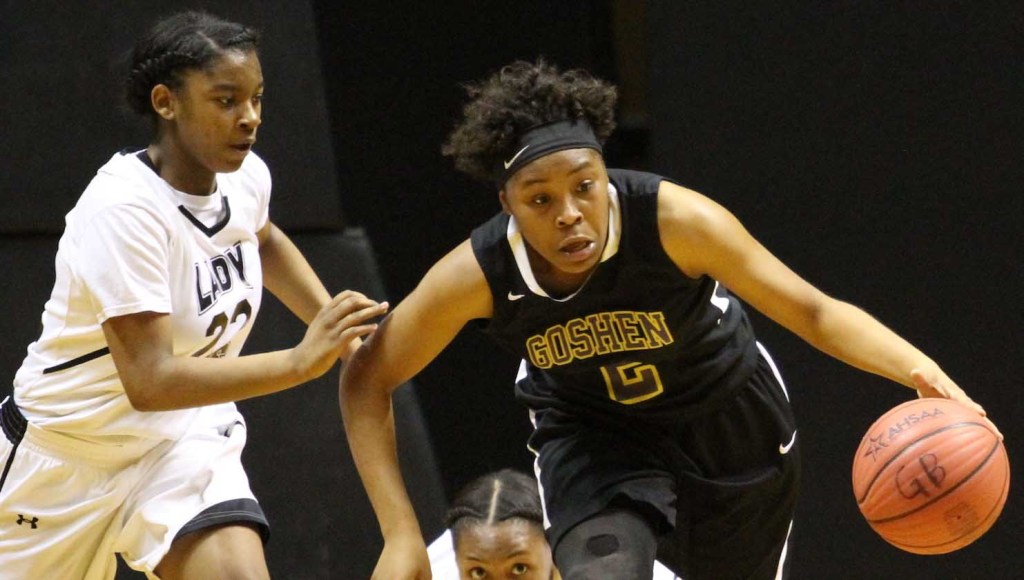 Messenger Photo/dan smith Bree Griffin dribbles the ball for Goshen during a game in early February during last season’s regional tournament. Griffin and the Eagles are hoping for a successful 2017 season.

The Goshen Lady Eagles return an experienced roster in 2017 and they hope to make a deep in the run in the state tournament.

The Eagles lost key player Shamiya Griffin to graduation after last season, but her sister Bree Griffin looks to take the next step this year and lead the Eagles to success.

“We are returning Bree Griffin and we are happy about that,” said head coach Fred Lowery. “She has been the catalyst of the team for two years. Jada Hall is returning as a senior and she played extremely well last year. We are banking on Jada to play big this year.”

JaMecia Berry, Anastasia Mallard and Harmony Robinson return to a team that made it to the regional tournament for the second consecutive season last year.

“Each of them received a great amount of playing time last year,” Lowery said. “They were not starters, but they got their feet wet.”

Bree Griffin was named second-team All-State a season ago after she posted 512 points, 131 rebounds, 102 assists and averaged 24 points per game. When asked if she had another level, Lowery wasn’t sure; but he was excited to find out what it could be.

Along with Bree Griffin, Lowery believes he can fill the vacated shoes of Shamiya Griffin with Berry and newcomer Kelsey Gibson.

The Eagles will once again by joined in their area with Luverne, Calhoun and Central-Hayneville. Limiting turnovers will go a long way in determining the Lady Eagles’ success this season.

“Luverne is supposed to be pretty good,” Lowery said. “Calhoun only lost one senior I believe. We are going to have to limit our mistakes. We talk about minimizing turnovers. Last year we had too many turnovers because everyone was looking for Bree to handle the basketball. This year, Jada has improved some at the guard spot. I think we will be competitive and that we will compete for an area championship.”

With a faster roster this season, the hope of the Eagles is that they can get out and run a little bit more and be able to press their opponents into making mistakes.

The Eagles are scheduled to begin their season on November 28, but due to the success of the football team, it’s likely that first game will be pushed back to December.