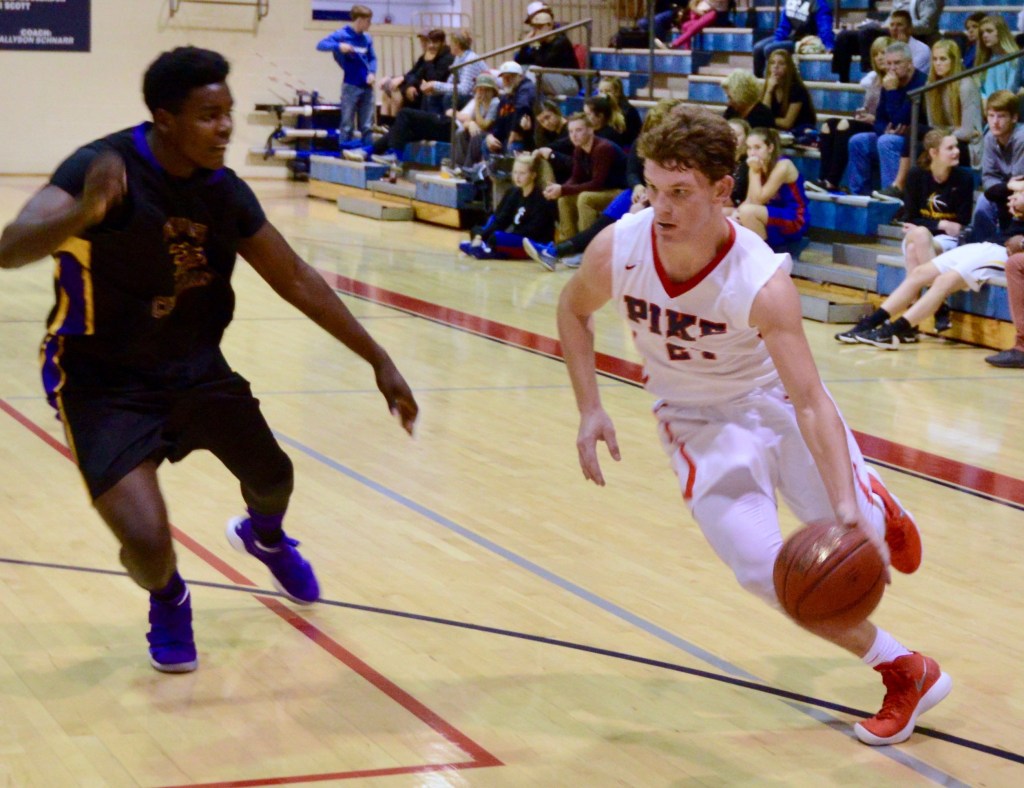 photo/Debi green Reed Jinright tries to dribble around a Evangel defender during their game in Auburn on Tuesday morning. Jinright and the Patriots fell to the Lions 67-51.

The Pike Liberal Arts boy’s basketball ball fell to Evangel Christian 67-51 on Tuesday morning in the Lee-Scott Tournament in Auburn.

The loss hands the Patriots their first loss of the season to even their record at 1-1.

“We were competitive and we started off strong,” said head coach Allen Ponder. “I was very happy with how we played early. Evangel had us outsized. They were very athletic. I look forward to a game like this, because games like that really show you what you need to work on.”

Tuesday’s game was just the Patriots’ second game of the season. Having to play games on back-to-back days tested their endurance.

“It’s tough,” Ponder said. “It’s hard, especially when you play at 4:30 then you come back and play at 10:30 the next morning. It’s always difficult. I feel like our guys are really well conditioned. I feel like at this point we struggle at being in the right spots. Once we get in the right spot, then I feel like we will be a good basketball team.”
The Patriots finished the first quarter holding a three-point lead at 13-10 before Evangel closed the gap and took a lead into halftime 29-16.

The Lions outscored the Patriots in the second half 38-25 to claim the 16-point win.

Senior Reed Jinright led the Patriots in scoring for the second consecutive day with 14 points. Cole McQuarter finished with 8 points, Ethan Green had 7, Jade Sikes had 6, Ridge Knotts picked up 5, and Max Copeland and Wood Jinright each had 3.

The Patriots will have the rest of the week off for the holiday and will return to practice this weekend before hosting Autauga on Tuesday afternoon.