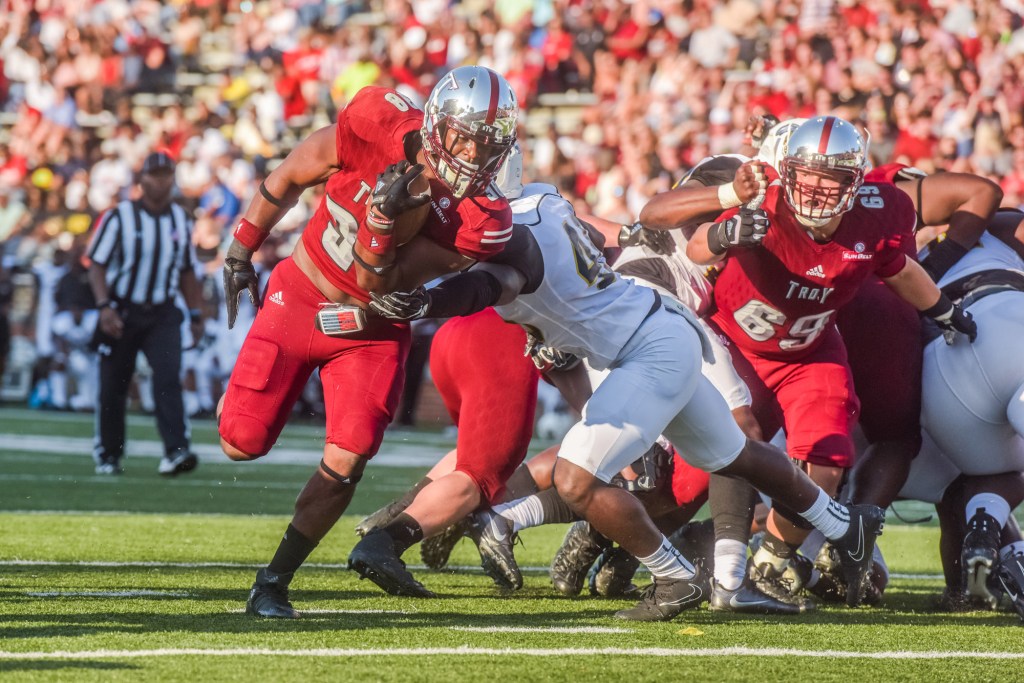 Photo/Jonah Enfinger Troy running back Jordan Chunn runs the ball for the Trojans early in the year against Alabama State.

Twenty Troy Trojan seniors will hit the field of Veterans Memorial Stadium for the final time on Friday afternoon when they play Texas State on Senior Day.

Even in the midst of a heated race for the Sun Belt crown, the Trojans will take time prior to their game to recognize the players that dedicated so much time while wearing the Trojan uniform.

“It’s just going to be a regular day for me,” said quarterback Brandon Silvers. “Just going out there, warming up, trying to have some fun during warm-ups, pregame – getting out there and getting loose. It is our last (home) game, but I’m not going to focus just on that. I’m going to focus on winning the game, like I always do.”

Silvers has won a bowl game and won All-Conference honors, but his favorite memory as a Trojan comes during a game in mid November of 2016.

“Probably after the App State game,” Silvers said. “That was really fun. Coming back and the defense holding them at the end of the game. Probably App State. And I showed off a little bit of wheels, too. That’s always fun. Nobody knew I had those.”

Running back Jordan Chunn will play his final home game as Troy’s all-time leader in touchdowns with 46 and he has rushed for a total of 3,007 yards.

“It’s going to be, I his whole motto was ‘Rebuild the Wall,” Chunn said. “Knowing that I was part of rebuilding would say, emotional,” Chunn said. “At the same time, it will be a great feeling just because it’s going to be my last game in Veterans (Memorial) Stadium knowing I had so many memories here.”

Like Silvers, Chunn has been through all the ups and downs during his tenure as a Trojan, but he feels special knowing that a firm foundation has been placed.

“When coach Brown first got here, the wall is going to be pretty nice.”

As for the records, Chunn hasn’t let it sink in as of yet.

“It still hasn’t hit me yet that I’ve broke the record yet,” Chunn said. “We still have plenty more games to go.”

Emotions are sure to be riding high for all the seniors on Friday afternoon when they hear their names called. When asked who was more apt to shed tears, there was one player that was named more than any other.

As for Chunn, he believes he won’t be the only one shedding a tear.

“Probably all of the seniors because we’ve all accomplished a lot, and now it’s coming down to an end,” Chunn said.

Chunn does believe that Silvers is more apt to cry, even though he has yet to see it happen.

“I’ve never seen him cry to be honest with you. He’s taken some crazy hits. Maybe he cries in the shower.”