Welcome back: Trojans look to finish season on a high note 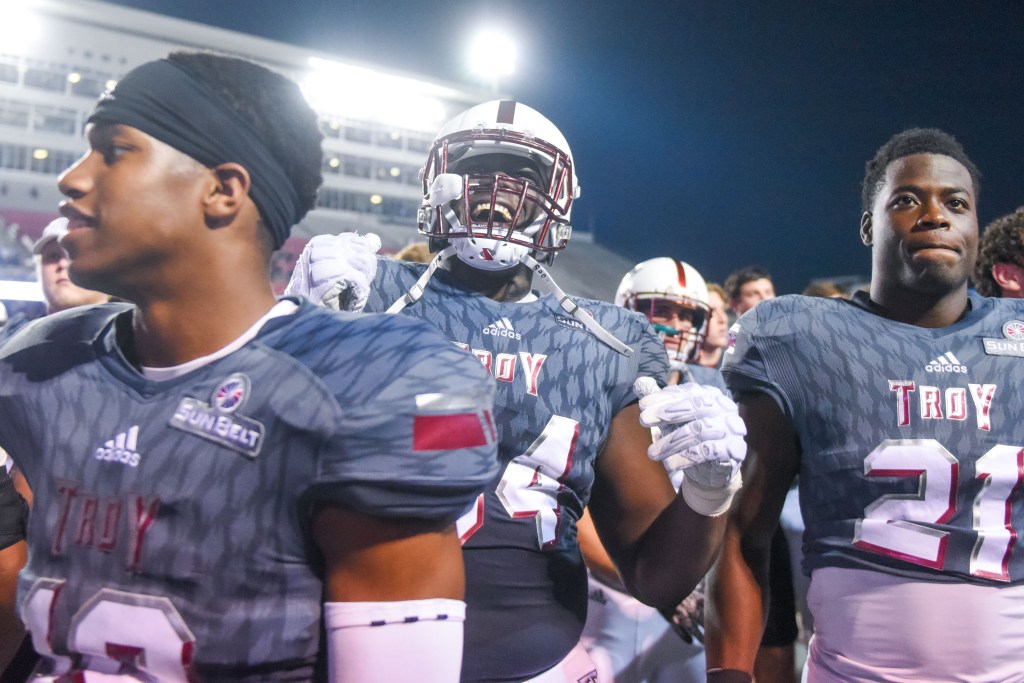 photo/Jonah Enfinger The Trojans celebrate after picking up a 24-21 win over Idaho on Thursday, November 2.

The Troy Trojans are back at 8-2, sitting exactly where they sat last year at the same time. With the conference championship still in play, the Trojans hope for a different conclusion.

The Trojans, coming off their bye week, will begin their final two-game stretch this Friday afternoon when they host Texas State.

“The bye week came at, what I think, is an opportune time for us,” said head coach Neal Brown. “We’re really healthy. We’ll be at full speed with the exception of maybe Zo Bridges, who will be a game-time call. With that exception, we’ll be at full strength. I think we’re probably as fresh and healthy as anybody in the country going into our 11th game.”

The Trojans currently sit in a three-way tie on top of the Sun Belt Conference standings with a 5-1 conference record and have a chance to claim a conference title over the next two games.

Last season, the Trojans got off to an 8-1 start but dropped two of their final three games, including the season finale against Georgia Southern.

“We just have to play better. There are a couple of things working in our favor this year, as opposed to last year,” Brown said. “First, being that we’ve been in this situation before. Second, we’re a lot healthier and fresher than we were at this point last season. We’ve really tried to improve as we went on. As a football team in all three phases, I think we’re playing our best football of the year. It is our plan to finish strong. We need to be 1-0.”

The final two games will come against the 2-9 Bobcats and the conference co-leading Arkansas State Red Wolves that beat the Trojans a year ago.

“Our focus since the South Alabama game has been to lock in week-to-week. I think that’s the goal here,” Brown said. “We’re only playing one game this week, so that’s the game we have to focus on. We’ve proven that we’re incapable of looking ahead. We are not good enough to just show up and beat anybody. Our goal is to continually improve, so we’re going to continually improve and be 1-0 this week. If we do that, then we’ll have all our goals in reach.”

The last time the Trojans were on a bye week they were coming off a win over LSU, perhaps the biggest Trojan victory since the university moved up to the Division-IA in 2001. They followed it up with a disappointing performance against in-state rival South Alabama. This week, they’re hoping history doesn’t repeat itself.

“The bye week comes when it comes,” Brown said. “We just have to deal with it. We practiced three times last week for about an hour. We practiced hard. We did a lot of good work. The last two teams we play are very similar offensively to what we do from a schematic standpoint. Our defense is varied and multiple enough that it’s good preparation for our offense to go against our defense. We tried to play fast and get the guys in and out.”