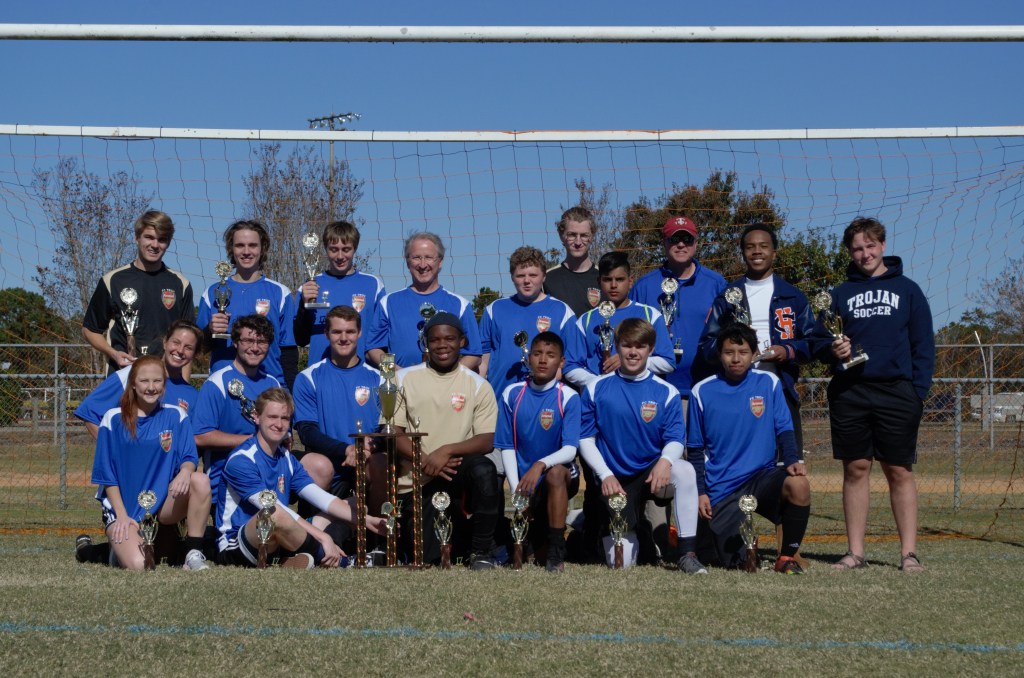 Three local teams competed in Alabama Recreation and Parks Association State Soccer Tournament in Dothan over the weekend. The Troy Arsenal 19U team took home a state championship after compiling a 2-0 record against Prattville and Dothan.

In game one, Troy and Prattville were tied at zero at the end of regulation. Troy went on to win the shootout 4-3. Troy answered with a 3-2 win on Sunday over Dothan to claim the ARPA Soccer Championship.

“It’s always exciting,” said head coach Doug McLendon. “It was a big deal. We went through a lot to get that team together. We put a lot of time into it and the kids responded to the practice. We had good attendance at practice and it showed on the field.”

Troy had strong leadership throughout the tournament according to McLendon and it started with their veteran players.

“We had a lot of very strong play from our senior leadership, players that aren’t afraid to be vocal and demand the best from their teammates,” McLendon said. “That’s what it takes to be a champion. We had a lot of substitutes on the bench who stepped up in critical moments, it was a complete team effort.”

“For me personally, I dedicated my tournament efforts to the memory of Andrew Bentley who passed last Saturday night at age 25,” McLendon said. “He encouraged my son, Douglas, to play soccer at age 7 and so got us all involved in the sport.”

McLendon went on to thank the effort put forth by the Troy Recreation Department.

“Of course, none of this would be possible with the championship-caliber staff of the Troy Recreation Department, David Dickey, Brian Meadows and the incomparable Director Dan Smith,” McLendon said. “They take care of our every need at home and at the tournament,”

“We had a real championship coaching staff,” McLendon said. “They have six state titles between them and they made my job easier. I can’t thank them enough.”

It was a countywide effort this year for the Troy Arsenal in 2017. They pulled athletes that participated in other sports such as volleyball, tennis and baseball.

“It’s especially rewarding to be able to take players from so many schools,” McLendon said. “We had a lot of fun in the regular season together, and thee young adults took the tournament team very seriously. It was a countywide effort. Due to six-man limit in Alabama, we can only use six CHHS soccer players max on a non-school team. We only used four.”

The 10U team was also in action over the weekend. They finished pool play 2-1 after they fell to Dothan 4-3. Troy held a 2-1 lead heading into halftime, but Dothan answered in the second half, outscoring Troy 3-1 to earn them a berth in the championship against Huntsville. Dothan came out on top 4-2 to claim the championship.”

Andrew Davis and the 8U boy’s team played two games in Dothan over the weekend. They began their tournament with a win over Dothan Blue before falling to Alex City to end their tournament.