Sweet 16: Eagles throttle Thorsby 42-8 to advance to the third round of the Class 2A Playoffs 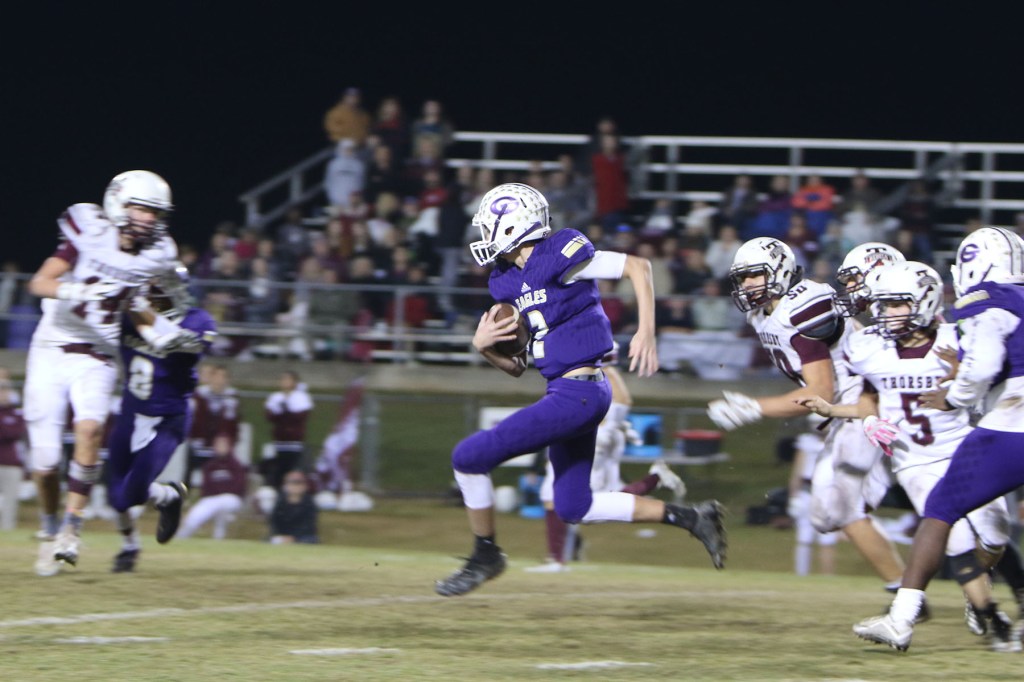 The Goshen Eagles advanced to the third round of the playoffs on Friday night when they defeated Thorsby 42-8. Above: Brock Snyder (2) runs the ball for Goshen against Thorsby.

The Goshen Eagles are heading to the third round of the Class 2A State Playoffs after they defeated Thorsby 42-8 on Friday night in Goshen.

The Eagles overcame an early 8-0 deficit when they scored 42 unanswered points on the way to their way to win number 11 on the season.

“I am proud of our guys,” Snyder said. “We are going to be happy for a little a while. I don’t know who we have to play next, but we have to get ready for whom ever it is because that is the most important game now.”

The Rebels offense came out throwing. Led by quarterback Michael Fortner, the Rebels completed four passes for 58 yards on the opening drive including a 20-yard touchdown pass to Brody Barnett to give Thorsby an early 8-0 lead after a successful two-point conversion.

The Eagles answered on their second drive with big plays of their own. Brock Snyder completed a thirty-yard pass to Zack Alford and Damion Passmore had a run of 23 yards. Snyder completed the drive with a one-yard touchdown run to cut the deficit down to just one at 8-7.

Facing a third and long, Snyder scrambled outside of the pocket and found a wide open Alford for a 46-yard touchdown to give the Eagles their first lead of the game at 14-8 with 34 seconds remaining in the quarter. Snyder finished the game completing nine of his 22 passes for 194 yards and two touchdowns.

In the Eagles opening drive of the second quarter, Snyder connected with Alford again; this time for 34 yards to set the Eagles up at the 11. Passmore finished off the drive with an 11-yard run, his second of the game, to extend the Eagles lead to 21-8 with 9:55 remaining in the half. Passmore finished the night with 97 yards on 10 carries and had two touchdowns.

On their next drive the Eagles had two touchdowns called back due to penalties forcing them back to the 45. The drive stalled keeping the game at 21-8.

After going in for halftime already holding a 21-8 lead, the Eagles picked up right where they left off starting the third quarter. The Eagles capped off a short three-play drive with a 3-yard touchdown run by Passmore to extend the Eagles lead to 28-8.

The Eagles added to their lead on a 33-yard touchdown run by Zack Alford bringing the score to 35-8 with 2:14 remaining in the third. Alford finished the game with six catches for 156 yards and two touchdowns. On defense he also picked up two interceptions.

“I have been working hard at practice all week,” Alford said. “I think I played good, but I think I can play better.”

The Eagles closed out their scoring with a three-yard touchdown run by J.J. Harris to put them up 42-8.

The Eagles will head down Interstate 65 next Friday and take on St. Lukes in Mobile beginning at 7 p.m.