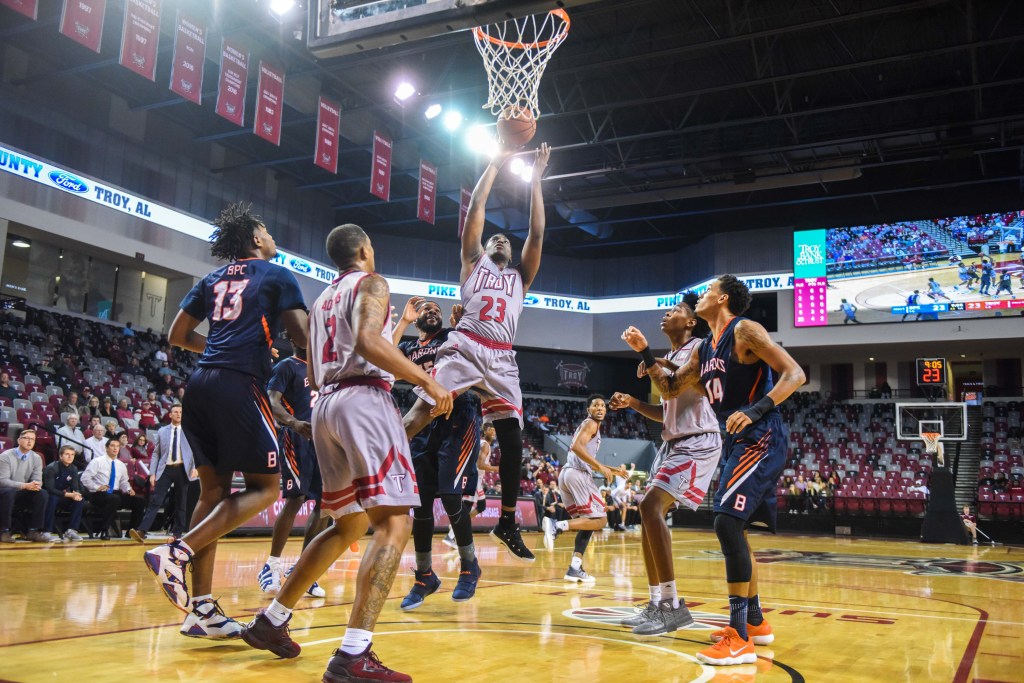 Trojan Jordon Varnado (23) goes up for a shot during Troy’s 106-71 win over Brewton-Parker on Thursday night.

The Troy Trojans overcame a an early eight-point deficit and knocked off the Brewton-Parker Barons 106-71 in Troy’s home opener on Thursday evening.

The win for the Trojans gives them a 2-2 record after the season’s first four games.

“We anticipated being a little flat because the Hawaii game was such an emotional game and then you have the travel,” said head coach Phil Cunningham. “What we didn’t expect was how well they were going to shoot the ball in the first half. Give them credit they made shots and the spread us out.”

The Trojans found themselves down 11-2 just three minutes into the game. The Trojans went on to outscore the Barons 18-9 over the next seven minutes to even the score at 20.

The three point shot was the Barons weapon in the opening half. They converted 50 percent from behind the arc.

Overall the lead changed hands four times in the first 20 minutes of action and the game went into halftime with the Trojans leading 46-43.

The Trojans outscored the Barons 60-28 in the second half to secure their first home win of the season.

The Trojans defense held the Barons to just 33 percent shooting on the night while outscoring them 48-22 in the paint.

Alex Hicks was the leading scorer for the Trojans. The junior finished with a career high 26 points while knocking down seven of his eight shots. He also hauled in 10 rebounds giving him a double double.

“Alex was a monster tonight,” Cunningham said. “He has been consistent through four games. He is rebounding the ball well. He played well offensively tonight. Alex is playing well.”

“He (Johnson) is a talented young man,” Cunningham said. “When he starts figuring stuff out he has a chance to be a special player.”

After being held scoreless in the opening half, Wesley Person finished in double figures with 10, as did Shawn Hopkins.

The Trojans will be back in action on Monday when they make the long anticipated trip to Lexington to take on Kentucky. Game time is scheduled for 7 p.m.

“It’s going to be a tremendous experience for everybody involved,” Cunningham said. “I think we will have 150 to 200 people at the game. That is the Mecca of college basketball. We have to get our legs back under us. We are going to have to get back physically because you better have everything you got going up there.”==