Balanced attack: Eagles head to round two against Thorsby 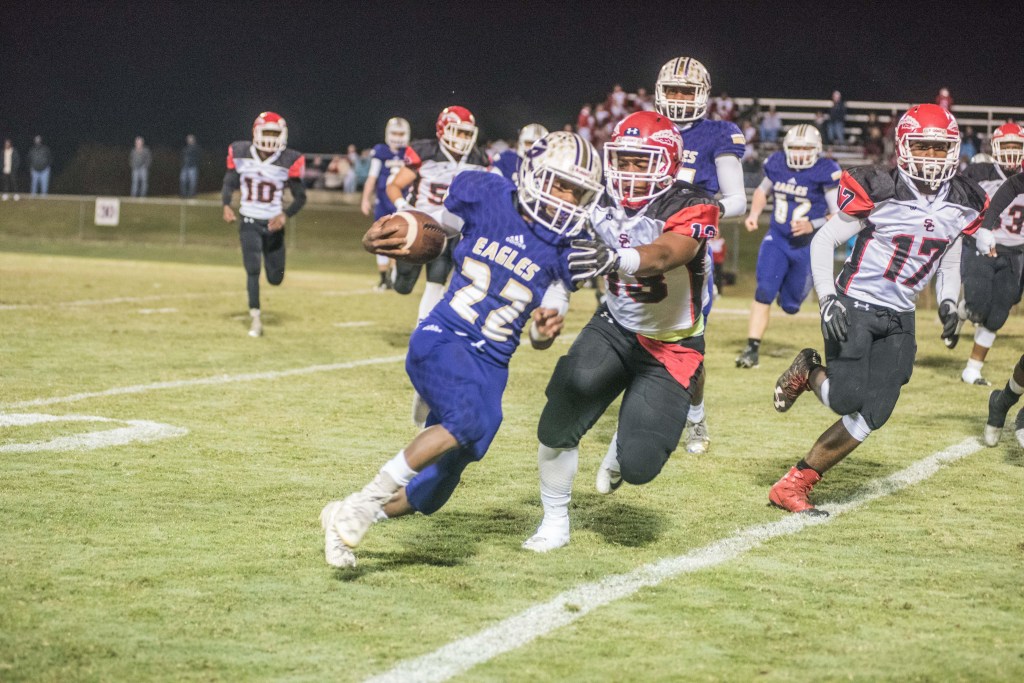 Damion Passmore (22) runs the ball for the Goshen Eagles during their game against Southern Choctaw on Friday, November 11. The Eagles will take on Thorsby Friday night in the second round of the state playoffs.

The Goshen Eagles head to their second straight appearance in the Class 2A state playoffs on Friday when they host Thorsby at Eagles Stadium.

The Eagles lost in the second round last year to Southern Choctaw. A win on Friday would advance the Eagles to the third round for the first time since 1991.

“Everybody understands what it takes,” said head coach Brock Snyder. “They understand that it’s a one game season. If you want to play, you have to win.”

Winning will take a strong passing game.  Last week, Eagles quarterback Brock Snyder completed nine of his 16 passes for 267 yards and three touchdowns. Senior Zack Alford was the beneficiary of three of those passes for 132 yards and scored two touchdowns. On October 27 in a win against Pike County the Eagles threw for 170 yards and one touchdown.

“It’s something that has been there,” Snyder said. “You don’t see it all the time because of the running game and what Damion (Passmore) has done as well as Zack (Alford) and Daquon Foster. Those guys have done a real good job.”

The Eagles are searching for balance on the offensive side of the ball.

“It’s very important,” Snyder said. “It makes teams have to work at a different level at practice to be able to cover different things. The more they have to work on helps keep them from working on themselves. We run several different formations so that helps us out a good bit.”

Throughout the season, Snyder has preached the importance of hard work and staying focused on the current game.

The Thorsby Rebels were 7-2 in the regular season and finished runner up in the Region 4. They defeated a Geneva County 42-14 in the first round of playoffs.

“They are a very good ball team,” Snyder said. “They will run an even front on defense some and they will play man in the back. They will send everybody a lot of times. (Offensively) they will throw the ball a lot. They will run an Auburn style of offense that will be difficult to cover.”

Pike County, Elba and Luverne all offered a glimpse of what Thorsby will bring to the game.

“They are very aggressive and they hit hard like a Pike County,” Snyder said. “Offensively they do things a lot like Luverne. They have weapons and we have to make sure we defend them.”

Kickoff between the Rebels and Eagles is scheduled for 7 p.m.