To the finish: Scott completes 11-year journey as he crosses finish line at the New York City Marathon 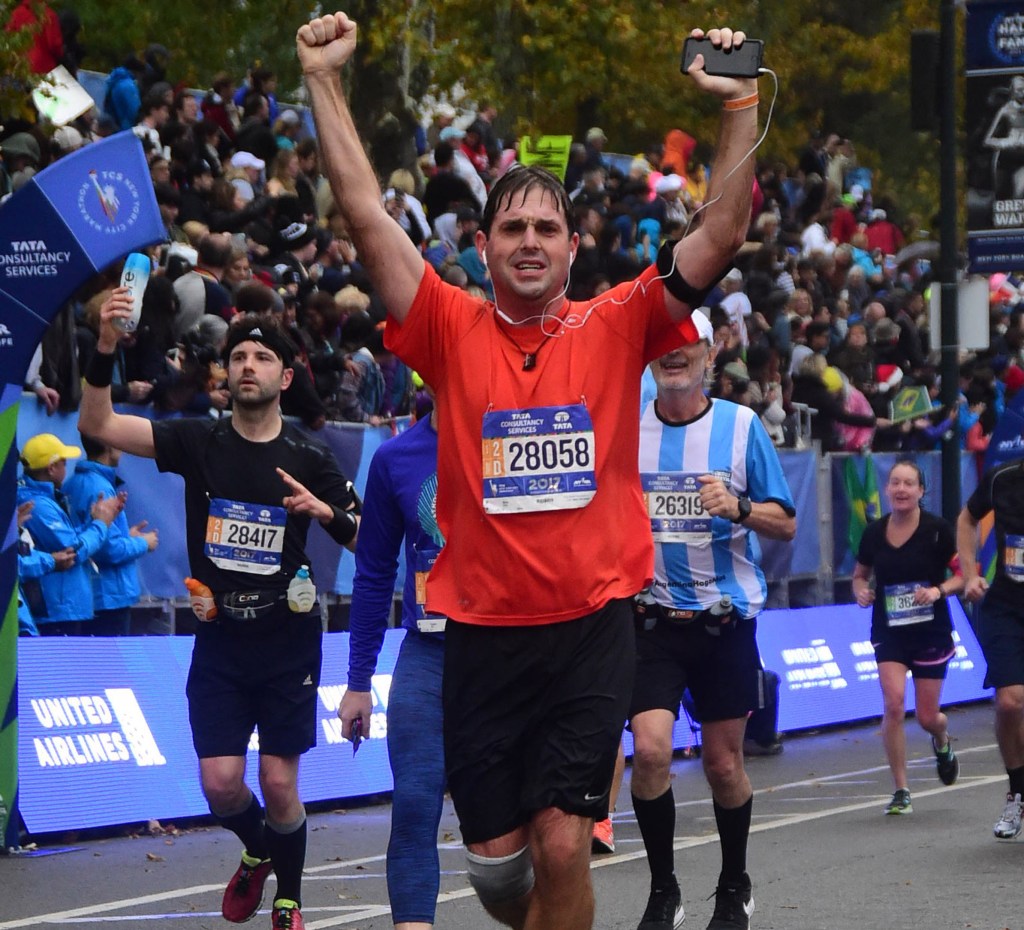 Eric Scott crosses the finish line with his arms raised after he finished the New York City Marathon on November 5.

Sikorsky General Manager Eric Scott was urged by a fried to begin running. Eleven years later, he tackled his first marathon in the streets of New York City in the New York City Marathon.

Scott was one of nearly 50,000 runners to travel through the five boroughs for the New York City Marathon on November 5.

“It was pretty amazing,” said Scott, who lives in Troy. “I am not sure what I was expecting, but it was an amazing experience. The people of New York came out for it. It was 26.2 miles and there were two to four people deep most of the race yelling for people. Somebody told me it was going to be the best tour of New York and they weren’t lying.”

Scott made the trip with his brother Brent Scott and his college roommate Jason Hutto.

Scott has completed half marathons, but he and two friends decided they wanted their first marathon to be the venerable New York race.

“It’s the one you have to run in,” Scott said. “I entered the lottery to be picked. Last May I got notified that I got picked for the New York City Marathon. It was a note that at first I thought was really cliché. It said get ready to change your life. I began training.”

Scott spent hours training for the marathon. During the middle of the week Scott would run six to eight miles a day, but on the weekend he would run 15 to 20 miles.

“It was a big undertaking,” Scott said. “I would be running a total of 45 miles a week. I didn’t consider myself way out of shape, but I got into shape in a way I never thought I would be.”

He made a calendar and made sure he stuck to his plan.

“Another cliché you hear is it’s not about that day, it’s about the preparation,” Scott said. “I took that pretty serious. I made a calendar. Each day I highlighted it to make sure that I did it and to give myself accountability. I was ready.”

Scott had been dealing with wear and tear on his knee leading up to the marathon. After mile number eight the knee started to act up.

“I started the race and I was good,” Scott said. “Throughout my training I had soreness in my knee just from over use. At about mile eight that started. I stretched and was able to work through that.”

For Scott the most important thing you can do for a marathon is create a playlist. Scott’s playlist included a wide range of music from Rolling Stones to Lady Gaga. That music came in handy down the final stretch of the marathon.

“The last six miles in the race I wasn’t paying attention to anything that was going on. It was all mental,” Scott said. “The max that I ever ran was 20 miles. Every mile after that was the most I had ever run. It was truly put your head down and run.”

Scott finished the race in 4:1:57. Crossing the finish line was a special moment for Scott.

“Surreal,” Scott said. “A buddy of mine that I went to college with surprised me on the course in Central Park. I was like ‘OK I have to finish strong.’ I crossed the finish line and I was tired. All the blood started going to my head. Your emotional I was your done and I can’t believe I did it. There is a steady stream of folks that are flowing through by the second. You’re sharing the moment with the 20 or so people you finished with. “It was an experience just to finish and be done.”

Scott plans to continue to run marathons, but he admits it would be hard to imagine running anywhere else other than New York.

“I wouldn’t mind continuing,” Scott said. “I don’t know if anything will top the experience I just had. To run New York was an amazing experience.”