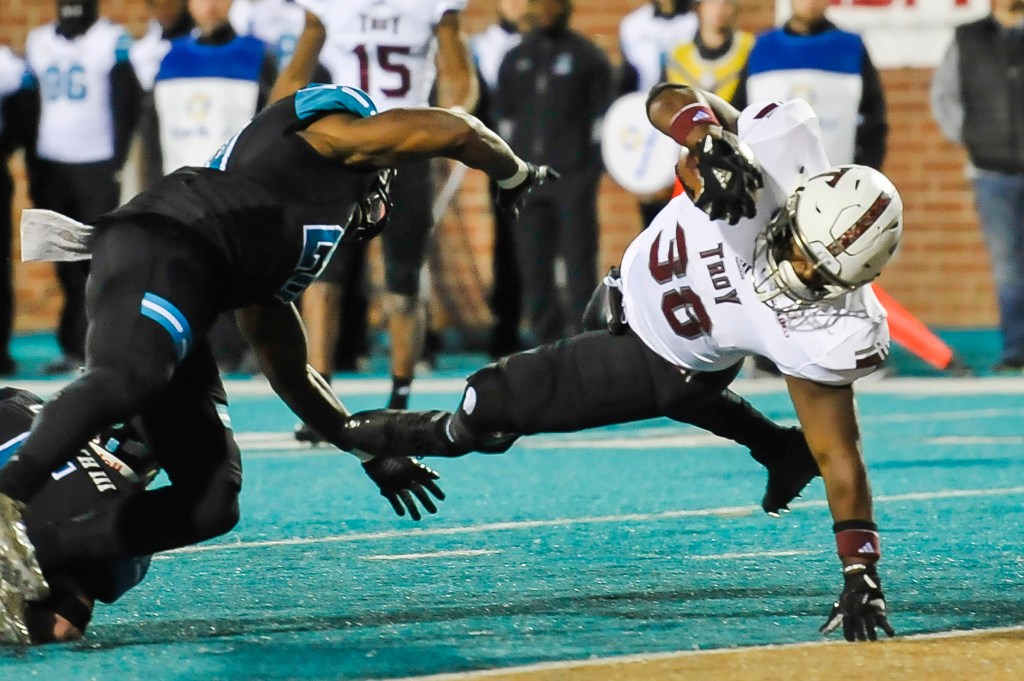 NCAA and Troy records fell during the Trojans’ 42-17 win over Coastal Carolina on Saturday afternoon at Brooks Stadium in Conway, South Carolina.

The win for the Trojans improved their overall record on the season to 8-2 and their conference record to 5-1.

“The win gets us to 1-0 for the week,” said Neal Brown to the assembled media on Saturday. “Just as importantly 5-1 in our conference. I think our team is getting better.”

Freshman Marcus Jones tied an NCAA record on Saturday by returning two kickoffs in a single game. The touchdowns came on back-to-back kickoffs.

“It was a great accomplishment and a milestone, but all I can do and all we can do is move forward,” Jones said.”

Not to be outdone, Troy running back Jordan Chunn broke the program’s all time touchdown record with an eight-yard touchdown run in the second quarter. The touchdown was his 46th all-time score, which beats Danny Grant’s mark.

The Trojan defense held the Chanticleers to 258 yards and got to quarterback Kilton Anderson five times.

“Defensively we continued to really pressure the quarterback,” Brown said. “That has been the difference for us defensively.”

According to Troy’s Adam Pendergast, Troy has now had at least four sacks in five out of their last six games.

“We are really talented in the interior of the defensive line,” Brown said. “You usually don’t see pressure from your defensive tackles but we are getting that.”

The Trojans now get set to enter their bye week. They will return to action on Friday, November 24 when they host Texas State.

“We have to finish the year,” Brown said. “We are sitting here with the same exact record we were at last year after 10 games. We are 8-2. We are proud of where we are at.”

The Trojans will close the season the following Saturday against Arkansas State. Brown and the Trojans would like to see a better finish than last year.

“Last year we didn’t finish well,” Brown said. “We limped down the stretch and lost two out of the last three in the regular season. We have put an emphasis on finishing. This bye week is going to be huge. We have to take care of them and get them rest.

Troy will recognize their seniors against the Bobcats on Black Friday. Kickoff is scheduled for 3 p.m. and it can be seen on ESPN3.