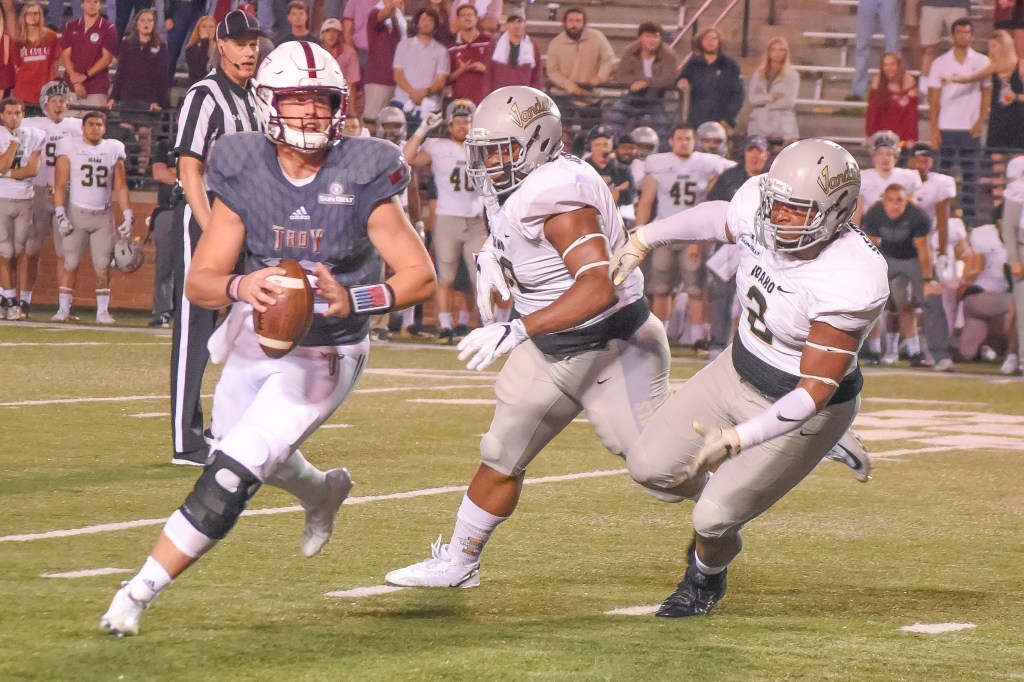 The Troy Trojans are set to take on Division-1 newcomer Coastal Carolina on Saturday afternoon. Despite their 1-8 record, Neal Brown and the Trojans have no plans on taking the Chanticleers lightly.

The Trojans (7-2, 4-1) have rattled off three in a row following their loss to South Alabama on October 11. In doing so, the Trojans – with a little help – have fought their way into the race for a Sun Belt Conference championship.

“We’re incapable of looking further than one week,” Brown said. “We’ve got to be locked in. I don’t even talk to our guys about the game. We’re a day-by-day operation right now. I’m sure they saw it on social media and maybe watched it on their phones on the ESPN app.”

The Chanticleers are currently in their first year as a member of the Sun Belt Conference. It has been a tough transition for the team, only winning one game in their opening season. Coastal Carolina finished play in the FCS with a 10-2 record last year.

Despite a 1-8 start, the Chanticleers led Arkansas into the fourth quarter before falling 39-38.

“I know a lot of you guys, as I did, got to watch them on Saturday afternoon,” Brown said. “I was really pulling for them, it would’ve been a big win for our conference, in their near upset of Arkansas. I was talking to Vic [Koenning] earlier that day about the amount of talent they have. I wasn’t overly surprised when I saw them winning in the second half.”

The Chanticleers have a history of winning conference championships at the FCS level and Brown believes they have the players to be competitive.

“They have a lot of guys that have won a lot of games at the FCS level over the course of the last three years,” Brown said. “They’ve won conference championships, they were the number one ranked team in the FCS for a time there. Those guys know how to win. They’ve played hard, but had a rough spell through the middle of the year. But I know the game Saturday is going to give them a lot of confidence and we’re going to have to continue to get better to win there on the road.”

For the first time in three weeks, the Trojan run game was at full strength against Idaho when Jordan Chunn returned from his leg injury. The Trojans tallied 183 yards including 113 from Chunn.

“We ran the ball pretty well Thursday,” Brown said. “The story of our year offensively is that we haven’t had many possessions. I think that makes for an odd year. Our running game has been consistent all year.”

On the other side of the ball, the Trojans have done well stopping the run as of late. Last week, the Trojans held the Vandals to less than 100 yards on the ground.

“Our defensive staff has done a nice job led by Vic,” Brown said. “They’ve done a good job making recruiting decisions. Our guys play hard; I think when you play hard you have a chance. We made a point to focus on stopping the run and putting pressure on the passer. That’s how we’ve gone from where we started to where we are right now.”

The run defense will be put to the test this weekend when they go up against an offense that will line up in multiple formations and will also feature the option. It will mark the second time this season that the Trojans see the option. They allowed 227 rushing to Georgia Southern.

“They have a multiple offense,” Brown said. “They give a lot of different looks. They do a lot of stuff we haven’t seen before. They’re throwing it effectively, their receivers made a ton of plays in one-on-one situations against Arkansas’ defensive backs. They have a young, but athletic offensive line.

The Trojans and Chanticleers will meet for the first time on Saturday beginning at 3 p.m.

“We don’t handle success very well,” Brown said. “Now we’re in the midst of a three-game winning streak and we have to be locked in. What happens down the road we have little control over. All we can control is our preparation of our body and our mind this week.”