Goshen moving on: Eagles handle Indians in opening round win 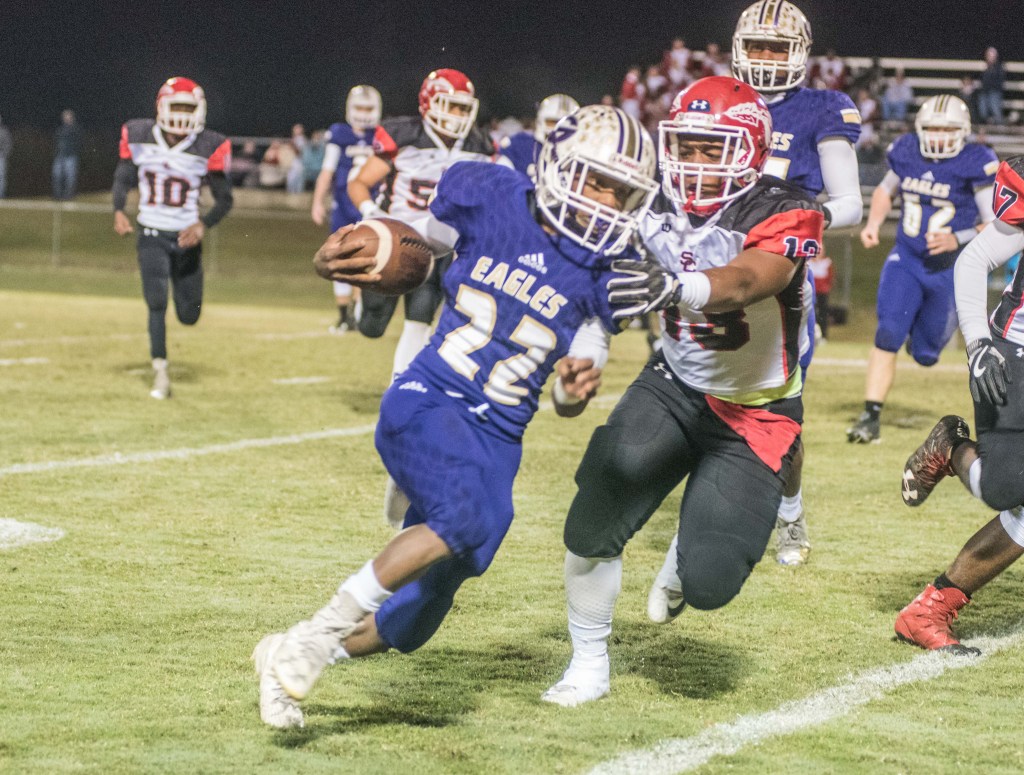 goshen running Damion Passmore runs the ball for Goshen during their 27-6 win over Southern Choctaw during Friday night’s Class 2A playoff game.

The Goshen Eagles returned a favor on Friday when they knocked off Southern Choctaw 27-6 in the opening round of the Class 2A state playoffs.

The Eagles fell to the Indians last year in the second round, but the Eagles prevailed Friday.

“We made some mistakes, but we were able to overcome the adversity,” said Goshen head coach Bart Snyder. “That’s what we had to do. We have to get better because each step gets more difficult. I’m proud of our guys and their overall effort.”

The Eagles running game has been a strength all season, but on Friday night it was the passing game that gave the Eagles the added advantage.

Quarterback Brock Snyder finished the game completing 9 of his 16 passes for 267 yards and three touchdowns.

“It’s a team effort and you never really know what is going to work,” Snyder said.

After holding the Indians on the opening drive of the game, the Goshen Eagles wasted no time to score on their opening possession. Zack Alford took a Snyder pass 66 yards for the game’s first score, giving the Eagles a 7-0 lead with 8:46 remaining in the first.

In the Eagles’ first drive of the second quarter, they got the ball deep into Indians territory before three penalties and a costly sack ended the drive way back on the 39.

After holding the Indians to a three-and-out on their next drive, the Eagles offense went back to work and jumped out to a 14-0 lead when Damion Passmore took a handoff 40 yards for a touchdown to give Goshen a 14-0 lead at the 5:22 mark of the second quarter.

The Indians answered and got on the board in the half’s final minute on a one-yard touchdown run. The Eagles stuffed the two-point conversion attempt, making the score 14-6 at the half.

The Eagles took the ball into Indian territory again to open the second half, but a pass by Alford was intercepted by an Indian lineman to snuff out another drive.

Like in the first half, the Eagles answered on their next drive. They did it with the passing game. Azavion Rogers took a pass 29 yards and Alford took a 63 yards for his second touchdown of the game to bring the score to 21-6 with 7:02 remaining in the third.

Iyan Hinkle closed out the third quarter with a 34-yard touchdown catch to give the Eagles a comfortable 27-6 lead after a missed extra point.

Passmore led the Eagles on the ground with 71 yards and one touchdown while Alford led the way in receiving with three catches for 132 yards and two touchdowns.

The Eagles will host next Friday’s round two contest against Thorsby.

“We will hit film tonight (Friday) and move our self into the ready position,” Snyder said. “Get ready for Thorsby.”