New season: Goshen opens up playoffs against a familiar opponent 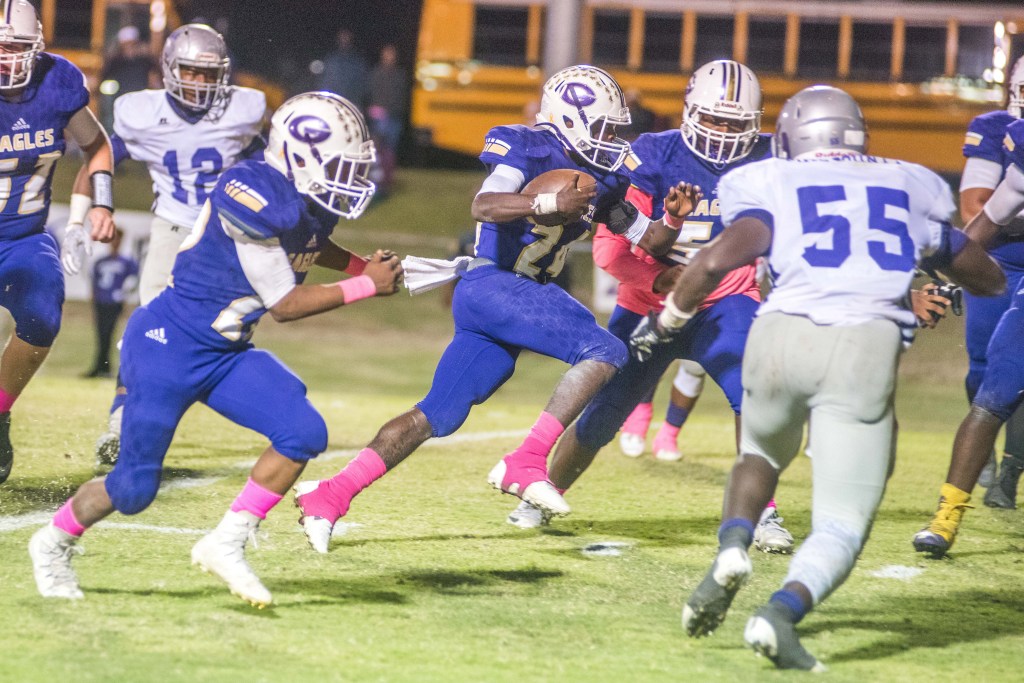 Goshen running back Zack Alford runs the ball against Pike County earlier this season. Alford and the Eagles will begin play in the state playoffs beginning on Friday night against Southern Choctaw.

One year ago, the Goshen Eagles traveled to Gilbertown to take on Southern Choctaw in the second round of the playoffs. It wasn’t a happy trip for the Eagles, who fell to the Indians 34-14.

Friday night, the Eagles hope to return the favor when the two teams meet once again in the opening round of the Class 2A state playoffs in Goshen.

“They are excited about it,” said head coach Bart Snyder. “They have put in some hard work and long hours this week.”

The Eagles (9-1, 6-0) are fresh off claiming their first region title in the Snyder era last Friday night. After a brief celebration, they got back to work.

“Our guys got excited about it, but they also understand the same thing that we worked so hard for years to say,” Snyder said. “When the game is over, you can celebrate through the weekend. Then you come to work on Sunday and Monday. That has been their mindset and they have done a good job doing that.”

Snyder has often said that he believes that Region 3 is consistently one of the more competitive regions in all of Class 2A. Snyder believes that tough stretch of games against Elba, New Brockton and Luverne helps the Eagles come playoff time.

“I think it does,” Snyder said. “We have a very tough one. You have New Brockton, you have us, Luverne and Elba. And you can’t count the other one’s out – they do a good job. You have to be ready for the next game. Our last five games have been as tough as anybody’s. We worked and earned where we are because we had to win the last ball game.”

Most teams are 10 or 11 games into their season at this point. The playoffs often come down to attrition and who is the healthiest down the stretch.

“It’s about staying fresh,” Snyder said. “If you played a jamboree game, you have played 11 ball games. That’s a lot of ball games. Keeping your legs fresh, staying injury free, but also staying aggressive and playing physical during practice is the big difference.”

Last season the Eagles allowed 34 points to a talented Indians roster. The Indians return many of their offensive threats this season.

“What we watched on film was pretty much what they ran last year, “ Snyder said. “They still have their two good running backs. They have a big team.”

Snyder believes the Indians’ region matches up with their own when it comes to competiveness.

“I would take their region and our region in 2A ball as being as strong as any top to bottom,” Snyder said. “The biggest difference in the ball game is going to be who wants it.”

The Indians come in as a four seed, but that is no reason to take them lightly.

“We have to make sure that we understand that a four is like our four,” Snyder said. “We played New Brockton who is our number four and they are very good.”

Snyder said the Eagles and the rest of their regional opponents are cheering each other on.

“In our region, we are pulling for each other,” Snyder said. “How great would it be if we get to put each other out?”

Kickoff is scheduled for 7 p.m. from Eagles Stadium in Goshen.