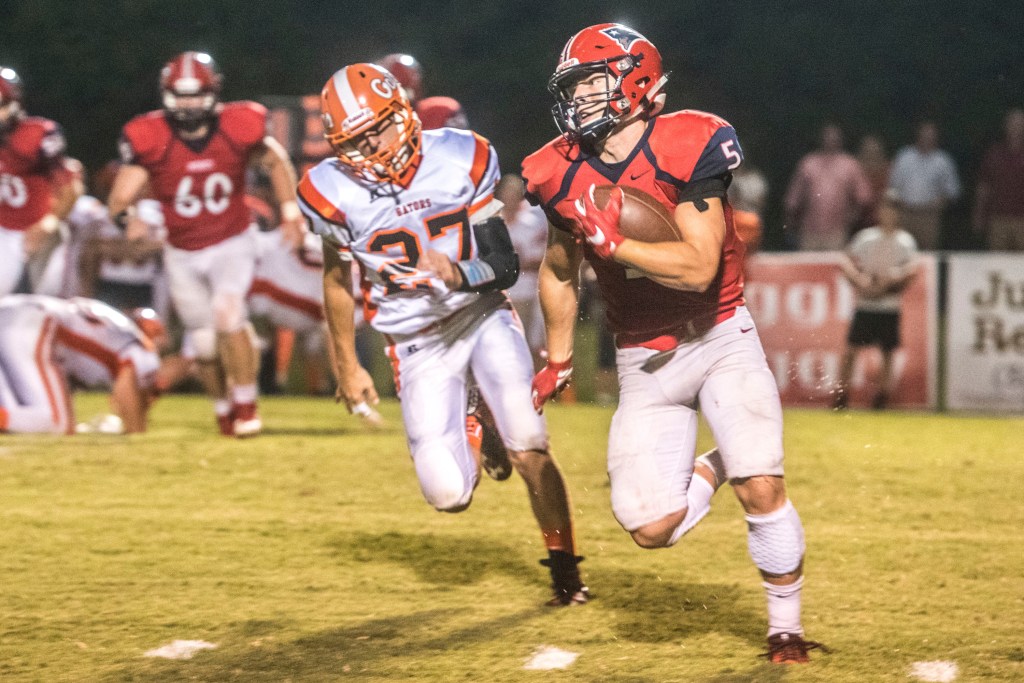 Messenger photo/Jonah enfinger Pike running back Reed Johnson runs the ball in a game early this season. Johnson was one of four Patriots to be named to the AISA All-Star Game in Montgomery.

Even though Pike Liberal Arts’ season is now finished, four Patriots have earned the right to play in one more game this season.

“I was proud that we had four of them,” said head coach Gene Allen. “If they hadn’t changed the rules, we would have had even more. All four of them deserve it. Three of them played both ways. They had good years for us on the offensive and defensive side of the ball. I am just glad we get another chance to see them play another game.”

All four of the Patriots are seniors and all were considered leaders on the football team during their stint wearing the red, white and blue.

“Three of them (Reed Jinright, Wood Jinright and Reed Johnson) have been there for a long time,” Allen said. “They are the most well-liked kids in the school from (kindergarten) all the way up. They have all been leaders. When they were JV and when they moved up to varsity, they continued to be leaders. They are vocal, they work hard and they earned the right to play in the game. I think they will play very well.”

Reed Jinright was one of the leaders on both sides of the ball in 2017. As quarterback, Jinright and the Patriots averaged 23 points per game. Jinright was also a formidable player on the defensive side of the ball.

Reed’s twin brother Wood Johnson spent time playing all over the field. He played both offense and defense and also spent time punting and kicking for the Patriots.

“He always had really good hands,” Allen said. “He catches the ball really well. This year he punted for us and kicked for us. He also returned kicks for us. He had a really good year at defensive back.”

Johnson entered spring practice as the go-to back for the Patriots. After the arrival of running back TK Thomas, Johnson’s role was split, but he still came to close to breaking the 1,000-yard barrier by the end of the year.

“He had several big catches for us and also started at linebacker,” Allen said. “He had some injuries late in the year, so we sat him out defensively but he had a great year for us on both sides of the ball for us.”

BJ Burke was the anchor on the line for the Patriots. He spent time as an offensive lineman and a nose guard on defense.

Cheerleaders Parish Adams, Gracie Blair, Haleigh Dewberry, Jordan Grice, Eden Hipps, Caroline Kirk, Anna May, Hailey Sasser and Emma Strickland will join the four football players at the all-star game after they were selected as AISA All-Stars during cheer camp in the summer.

The game will kick of at 7 p.m. on Friday, December 1 at the Crampton Bowl in Montgomery.

“I am looking forward to the chance to watch them play again as all-stars and see them compete against a team full of a lot of players that are really good.”